When we left Creston behind to drive east again, the grey clouds were aligned with my mood. For the first time we'd drive across the Rockies via the southern less touristic Highway 3 instead of the popular routes across the national parks.  There were 2 stops in my mind that I remembered from my trips 24 years before:  "the biggest truck in the world" and the "frankslide".  Jan had nodded with not too much enthusiasm when I had mentioned them as our to do's. I guess they didn't trigger the imagination too much.

After a stop in Cranbrook we drove to Fernie where we had lunch along the highway. At first I had planned to make a visit to the ski resort but at the moment itself we didn't feel much to go and see a closed ski-result and thanks to the chilly weather, we also opted against a walk in the historic village. From what I see online it has a beautiful main street against an impressive backdrop of mountains but I fear the mountains would have hidden in the clouds. We'll check it out next time, but now we drove on with our full stomach.

Sparwood
Not much later we approached Sparwood where I urged Jan not to miss the village exit to go and see the World's biggest truck: the Terex 33-19 Titan. And sure enough it was still there on the parking lot next to the tourist information center. I was a little confused by the fact there was tourist information as in my mind Sparwood has not much more to offer than the big truck. Obviously the truck got there because of the local mining industry and there were a lot of interesting interpretive signs to read about the current mining industry. On our way here, we also had seen multiple active mining sites so mining is not just something from the end of the 19th century boom of the Rockies / Kootenay region.  Some mines continue to be exploited.  But this custom ordered truck was too costly to get repaired when it broke down and now it's been resting since 1991 on this parking lot. The internet teaches me it's no longer the world's biggest truck since 1998 but none of the signs on site told me that :p.

Anyway, the truck is an excellent picture opportunity where I got a retake of my teenage picture posing in the tire (now only...where to find that old picture or slide?) and we got one of Kabouter. 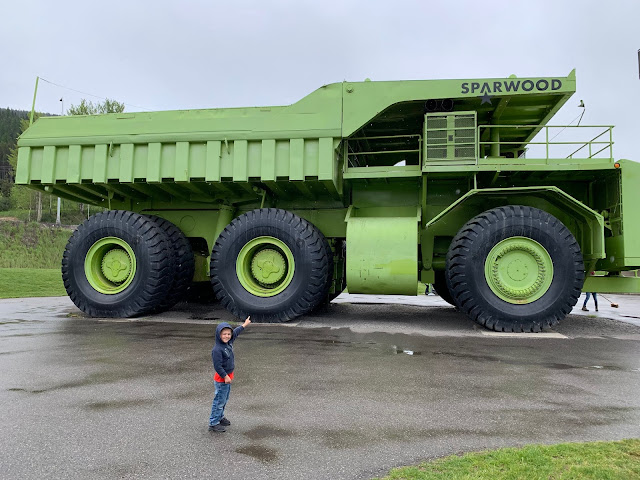 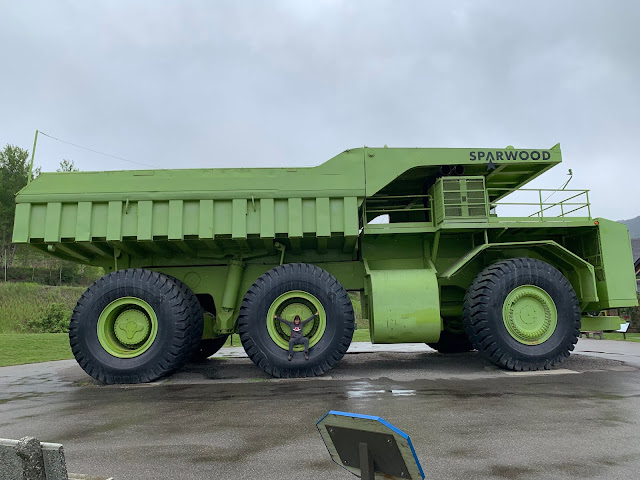 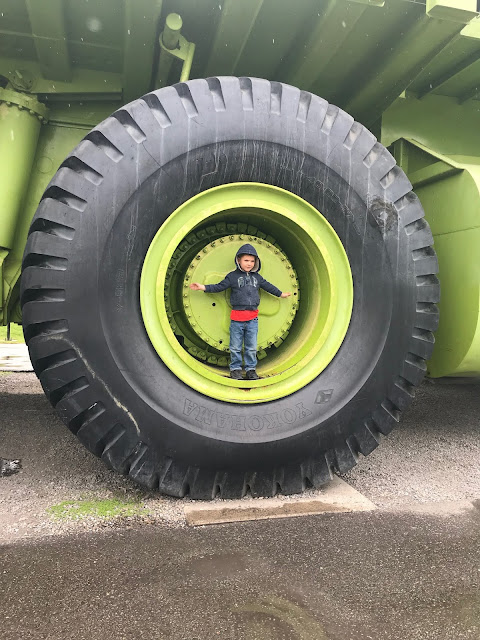 A little later we crossed the Crowsnest pass and the continental divide and by doing this we returned back to Alberta. We stopped at the information center along the highway at the pass but there was nothing to see beside an info desk. Good spot though to admire the Crowsnest mountain if the clouds collaborate. 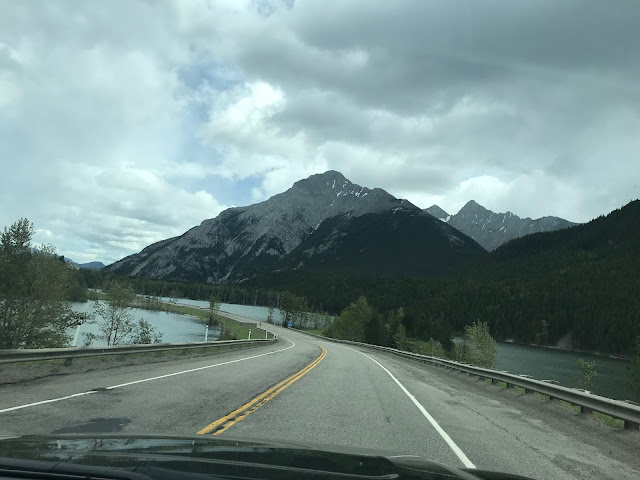 We drove to the interpretive center above/next to the Frank slide. From this point you have a really good view on the point where Turtle Mountain collapsed partially in 1903 and the rock slide took away part of the village in its rubble stream. 110 million tons of rock fell down with a speed of 112 km/h.  The stone slide has killed 70-90 people in the early morning...a catastrophe which featured the tiny mining village in global newspaper headlines.

Just within a week after the disaster, the mines opened again and trains approached the village from both sides while travelers had to try to cross the rock rubble carrying their luggage by foot.  The museum in the interpretative center gives very good insights in the geological processes, Turtle mountain, the mining industry in the area and old pictures and poignant testimonials of surviving villagers after the disaster. It had sufficient interactive corners for the children to keep occupied and push buttons and test but some of the topics were quite gloomy of course. On top of the disastrous Frank slide, it also covered the Hillcrest mine disaster in 1914 just a few kms further, Canada's worst mine disaster killing 189 miners and a smaller disaster.

Interesting fact: dozens of sensors and new technology are constantly measuring Turtle mountain as the South peak is still about to brake off at one point in the near or far future, causing another significant yet smaller slide. Hmmm I was a bit relieved not to have booked one of the AirB&B's that I had looked at at Hillcrest Mines and Bellevue ;). 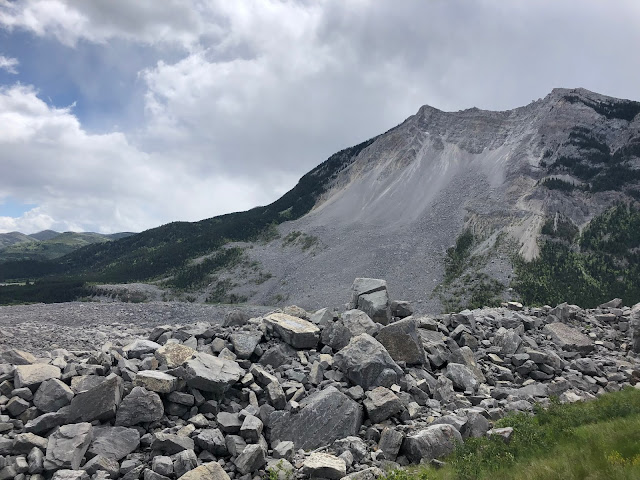 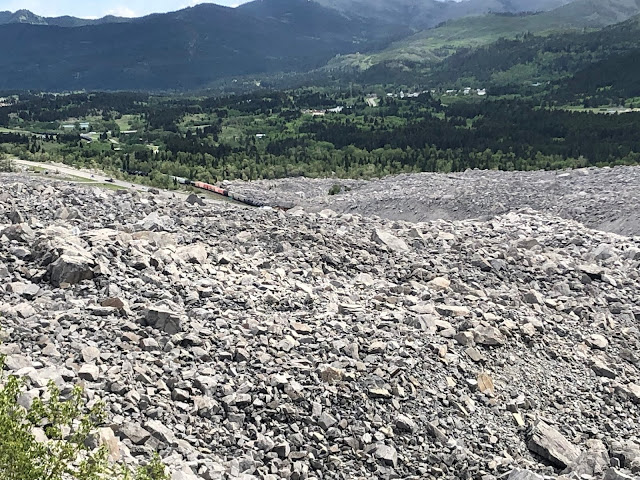 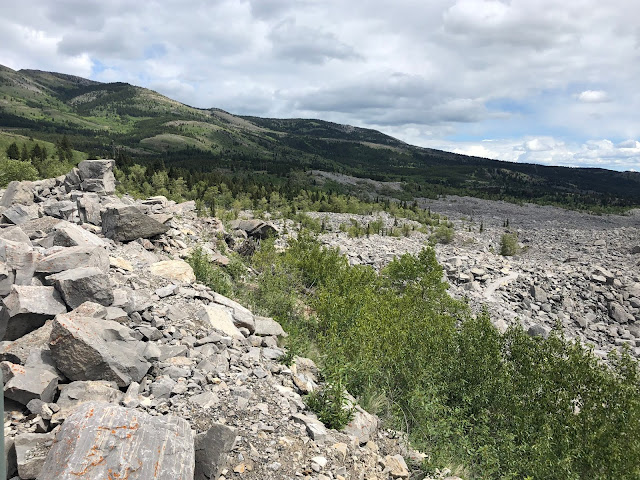 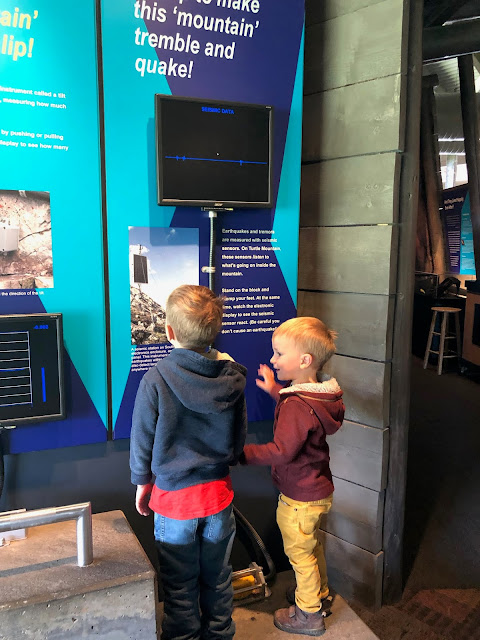 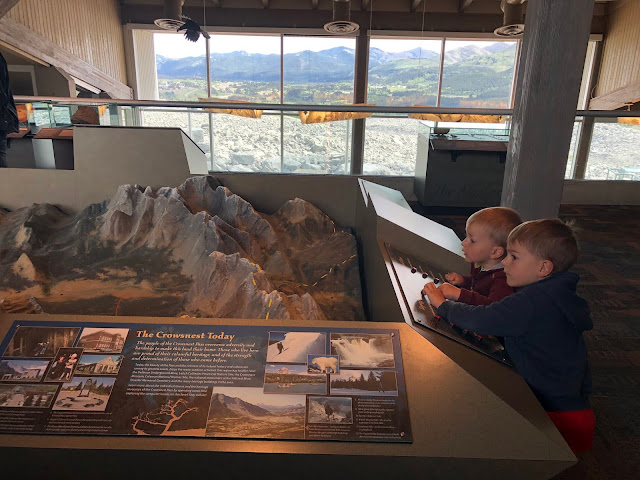 We walked outside and enjoyed the views from the higher location of the interpretative center. We looked back one more time to check out the mountains because when we left...after just a few kilometers we would all of a sudden find ourselves in the Alberta prairies with the mountains gone behind us. 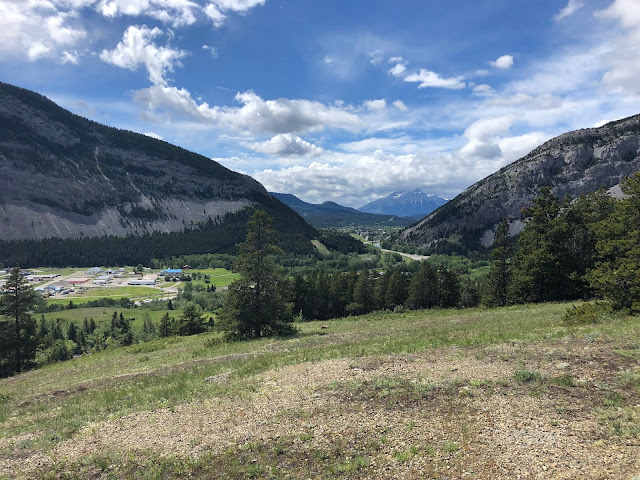 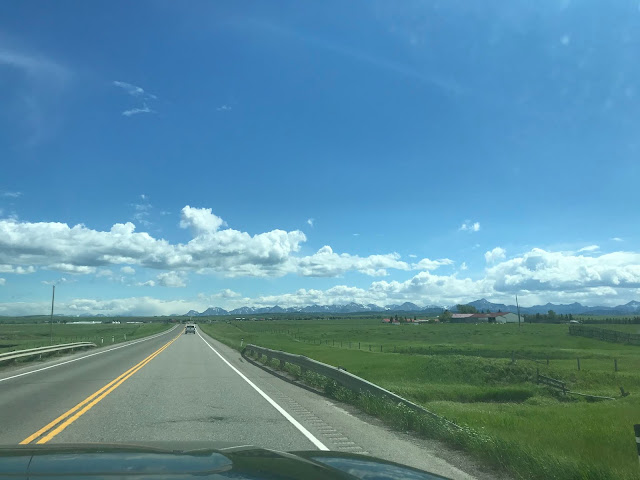 Pincher Creek
Since we had not done too many visits during the day, we arrived well in time at Pincher Creek, our stop for the night. We had simply booked a hotel here since it was a good distance from the places we wanted to go too. Pincher Creek itself did not have any attraction to me at all and I expected it to be a little dead town near the highway in the prairies. I anticipated spending a lot of time in the hotel pool.

Luckily Jan had done a little better research than myself and he knew there was some sort of museum to visit at the tourist info center.  Without knowing exactly what to expect, we drove past our hotel to go and check it out.

The Kootenai Brown pioneer village  turned out to be a fun small open air heritage museum that you can visit on a self-guided tour.  Unlike Fort Steele which has its buildings still in the original town site all dating from the end of the 18th century, the pioneer village has a collection of 27 relocated heritage buildings from a larger period of time, rescued from demolition in the wide area around Pincher Creek and relocated here next to the tourist office.

The site can boast the moutain cabin from Kootenai Brown - the founder of Waterton Lakes National Park- , a school, banks, a bath house, a general store etc, ... but also some more recent garages with old timers etc  ... and most importantly for the children: some train wagons to visit.

We were the sole visitors on the site, and the weather cleared up and we had a totally blast visiting this unexpected attraction. 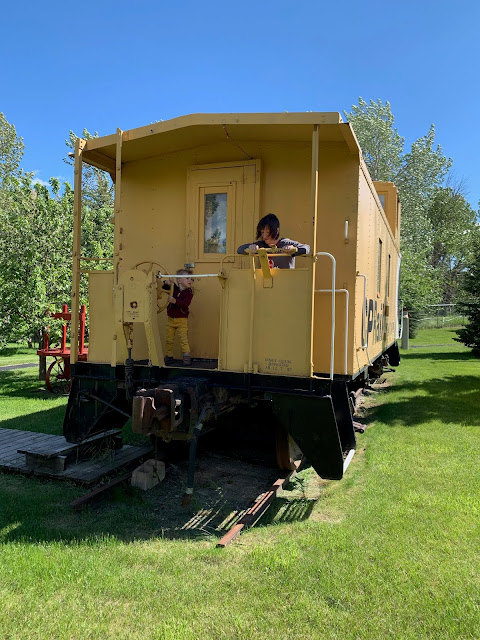 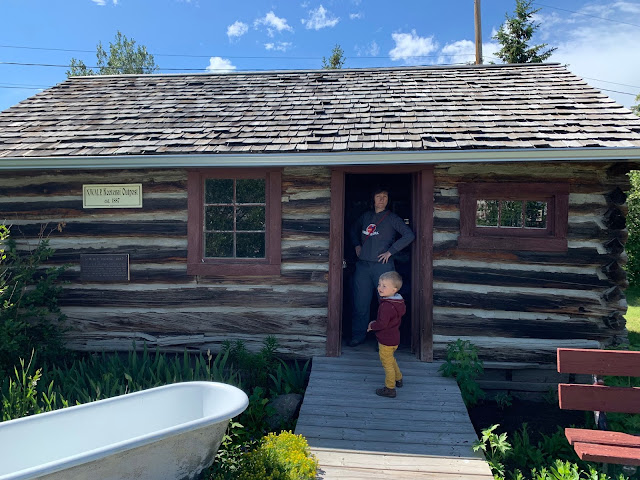 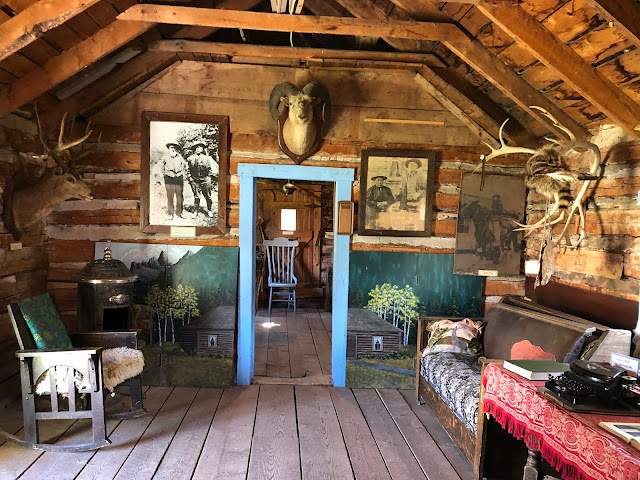 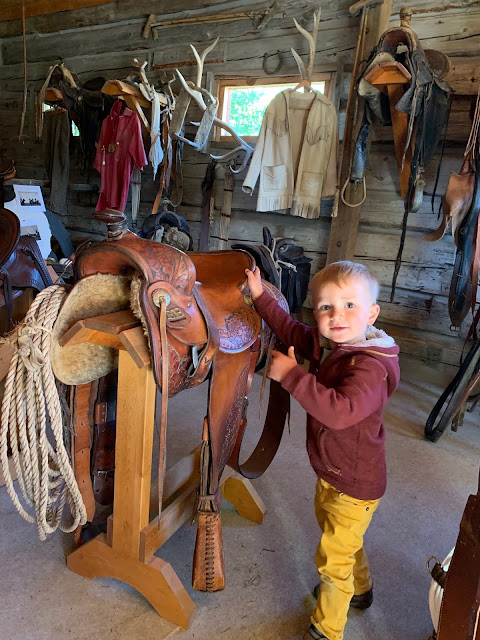 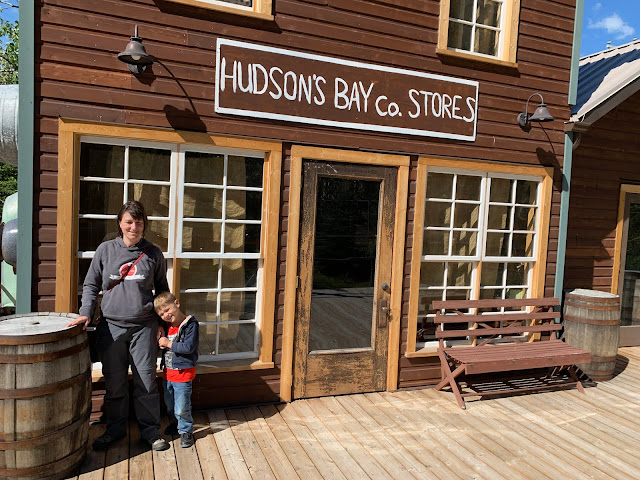 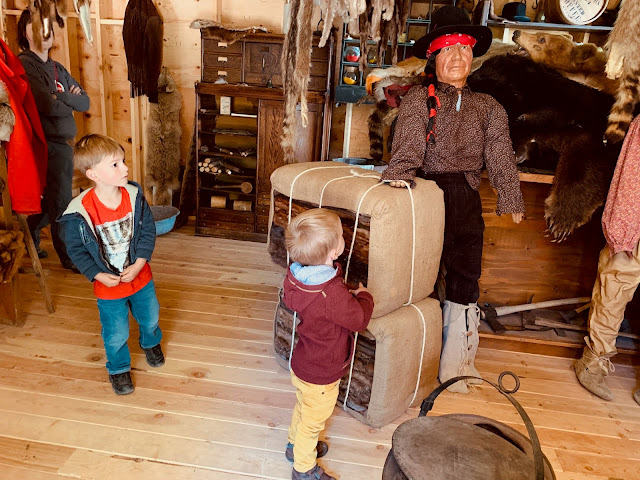 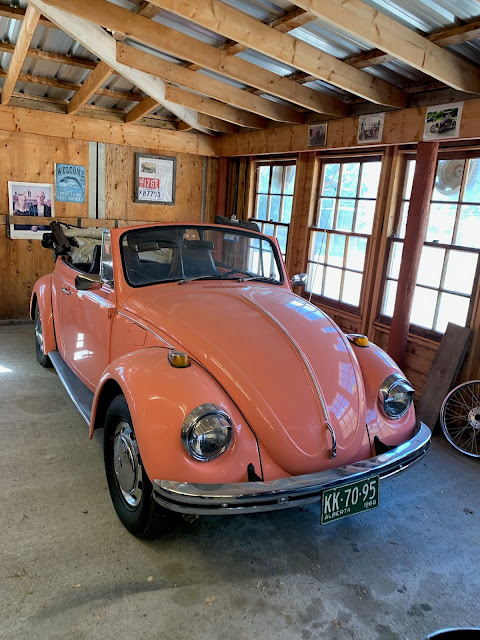 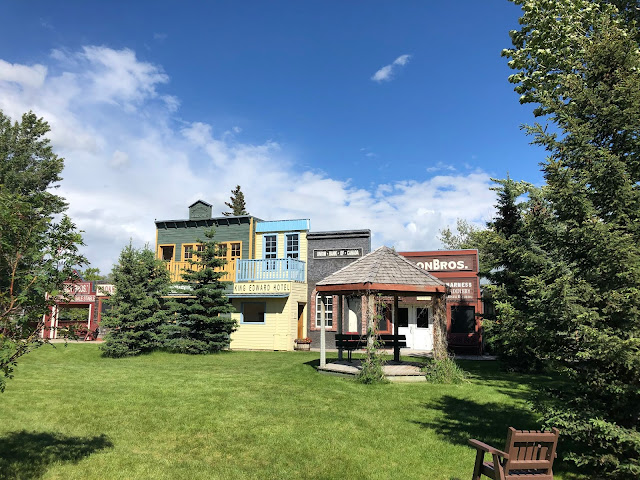 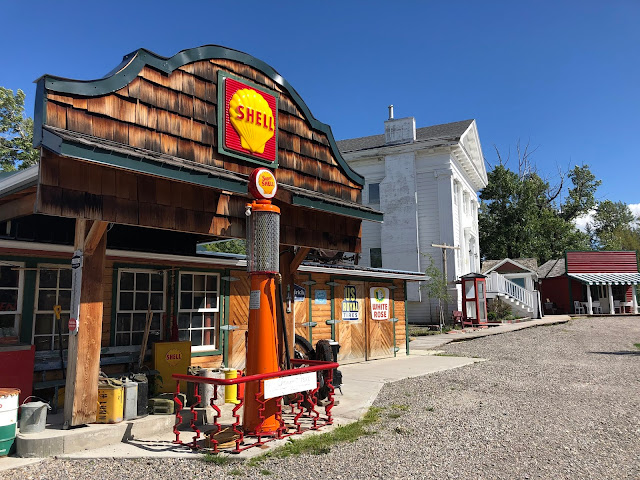 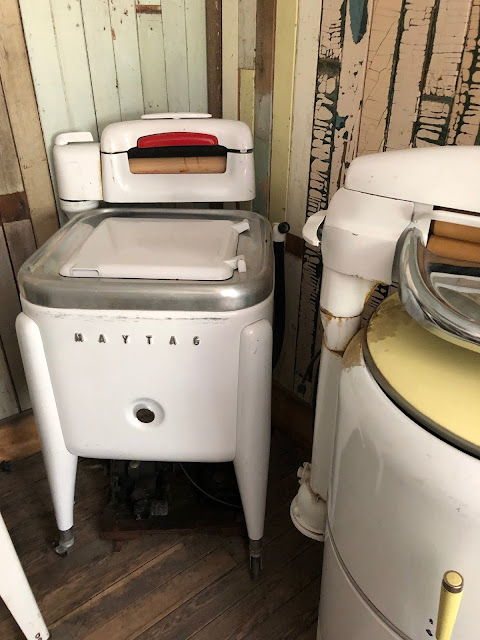