While the World Youth Day 2008 in Sydney is over already and I was reading the different media coverage on the event, my thoughts went back 8 and 3 years frequently over the last days and I had to think of all the people I knew that were in Sydney. Some personal flashbacks to share....

This morning we gathered with all Flemish participants in the Brussels cathedral where the Belgian Bishops preceded a Eucharist to kick-off our World Youth Jubilee trip. For the first time we (a few hundred adolescents and young adults) all got together and met. All seated on the floor of this ancient cathedral we listened to the gospel, received our welcome bag with songbook, textbook and the divisions into smaller groups (people of same age group + region). After a long busdrive we arrived in Taizé where we got a first feeling of the mass that would await us in Rome. Right now we were laying down in our sleeping bags on the floor of the modern church there. We had gotten permission to sleep in the church for one night after we participating in the daily evening meditation with its typical chants together with the other 6000 visitors at Taizé at that moment. The service was impressive in its modesty. I was glad to have seen Frère Roger who has founded this inspirational oecumenical community. 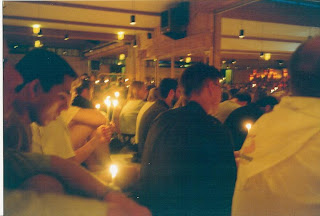 We are hiking with our little group of 10 in the South of France to our evening location which will apparently be the playground of some school near the Italian border. After 3 days we already start to know each other a lot better. We sit down now and then and discuss the figures of Paul and Peter or some bibletext. Doing so we learn each others visions, questions, doubts, frustrations and we share experiences. We're a really fun group joking around when hiking and hanging out together in evenings too when we have reached our location. I think I also get to know the other group that shares our bus a little better as well. They also come from the region of Ghent. (sidenote: I am regularly still in touch with a couple of them!)

All roads lead to Rome right? It surely seemed like it. The further we drove into Italy, the more busses we crossed with the big Jubilee flags on it and people waving at our own bus karavan. We had to enter the city by bus before 4 PM as the entry roads would then get closed off afterwards for all tourbusses. After a lot of confusion among our guides and the Italian volunteers about the assigned sleeping places (the assigned school which was full right away) the girls from our bus got our own private sleeping place in another little school nearby. Woohoo no overcrowded classrooms for us! After dropping off our suitcases we headed out in the direction of St-Peter's square where the official opening of the World Youth Day was taking place. Right away we were faced with the biggest challenge that we'd have to face again and again over the next days: overcrowded metro's, overcrowded streets and squares and a lot of time to get from any place to another. Rome was litteraly invaded by young pelgrims. We never managed to get on St Peter's square but had to be content to listen from one of the sidestreets. One of the Flemish priests who had studied in the Vatican guided us back by foot in order to avoid overcrowded metro again.

This morning we attended the regular teachings by one of our priests or bishops which we later on discussed in our usual little groups. Some Dutch pelgrims join these Dutchspeaking sessions.
Right after that the Flemish delegation was scheduled to go to Saint Peter where the "holy door" was open for the first time since 25 years. I didn't really get this 'pelgrimage' very much. We had to wait for 4-5 hours in line to get at the entrance and as there was too many people we couldn't all go through the "holy door" anyway or walk around at ease in this wonderful basilica. After waiting that long, I did squeeze myself into another queue to make sure that I walked through the golden gate. I know my parent's did so 25 years ago...who knows...maybe it's my children's turn in 25 years? Nevertheless the morning wasn't very meaningfull to me and we missed most of the afternoon's festival activities in our quest for food.
Lesson's learned: always return to the assigned food location even if that costs you an hour of transport time. Showing up at other food distribution locations without notice messes up the Italian organisation and doesn't provide you any food! So next time we'll always go back to the big parking lot at the edge of the city near our sleeping locations. 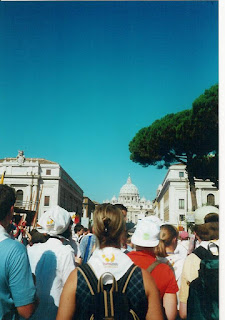 The last days we had a lot of fun at the Youth Festival. After the morning teachings which are organised across the city for each language, we have a choice out of a wide variety of activities: visit of the catacombs, watching a play about the life of Saint Catharina, attending Taizé prayers or prayers from other religious segregations, going to different (religion-related) concerts, ... Our adult chaperones usually spread out over one of those and whomever was interested could follow them....or you could head out on your own in little groups. We were slowly getting used to the overcrowded metro's and were finding our way around the city. Apart from the pelgrims and the thousands of volunteers in their blue T-shirts, Rome was deserted. At the Trevi fountain we came across a very confused touristic couple who had no clue in which mass event they had shown up.

Tonight we made it just in time back from our dinner location where we shared dinner with some nice Argentinian people (you only get food if you show up in groups of 6....so sometimes you must team up with other unknown hungry pelgrims...which is a good way to meet new people!) to participate in the Crossway which was lead by the Pope John-Paul II at the Colloseum. Our little radio transmitter didn't pick-up the broadcast translations very well, but we noticed a Flemish flag waving a little further and we could squeeze up to another Flemish group lead by the bishop of Bruges who was giving us direct translations from the Latin used.
The crossway was very powerful! It was the start towards the end festivaties of the World Youth Days over the weekend.

Tor Vergata was incredible. There's no way to describe the feeling of the pelgrimage we took today and the vigil and sleep-over we had together. No one can imagine camping and praying together with 2 million of people. The power....the silence....the joy.

After walking for hours with our backpacks in the burning heat....across highways in an endless march that seemed to reach from horizon to horizon...while being sprayed at now and then by the fire brigades to keep us cool... we finally arrived at the terrains of Tor Vergata outside Rome. We installed ourself in a little corner of one of the sectors near the crossroad of 2 walkways.. The mass there was unimaginable. I'll never see such a crowd again in my life. How would I ever be able to feel lonely again as a young Christian in the secular west-European world? If I'd ever feel sticking out, odd again...I'd have to think back at Tor Vergata and know that there's still plenty of other young Christians out there.

In the beginning of the evening the Pope John Paul II arrived by helicopter at the scene which must have been a magnificent sight from the air. Personally I couldn't care less before I came whether the pope would be there or not. As most of the other Flemish participants I have a fairly critical attitude towards the Vatican. The pope had not looked very much alive anymore in his recent tv appearances, so how would he be able to adress us anyway.
We had however already met a lot of pelgrims from other parts of the world for whom the pope's presence was very important. Much to our surprise the entire terrain started scanding "Joanni Paulo (clap clap...clap clap clap)" when he arrived as if he were a big popstar......and it was breathtaking and catching. On the big screens everywhere we could follow his little ride through parts of Tor Vergata in his transparent mobile. He looked like a different man, waving, smiling, 20 years younger all of a sudden.

That night during the vigil lead by the pope, I learned a lot about the role of young people in the church, the role of modern saints that the pope wanted to give us as role models, ..... But remarkably enough I remember most my surprise that John Paul II was a man with a good sense of humour. All his teachings were directly translated and broadcast in multiple languages which we could pick up with little portable radio's. I don't remember what he said specifically anymore but I remember laughing a couple of times throughout the night, and him spontaneously responding to some of the scanding/singing/shouting. I also remember the silence in prayer that we managed to get together with the 2 million of us. I get shivers again thinking back. 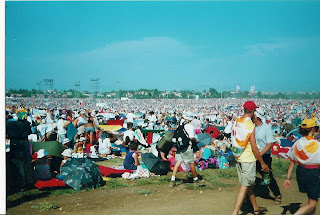