Belgium is a very small country.
Belgium has a lot of cycling races, small local ones to international classics.

So it is possible that you arrive at a family party and you wonder why you can't park in the street that afternoon. And then some of the arriving guests have heard that the 4th stage of the Eneco Tour of Benelux would come by the front door with Tom Boonen as favourite.

And then it is as simple as to walk outside in between the main dish and the cake with coffee to watch some of the more important tours in Belgium come by. The fun (and irritating) part of a cycling race is that you don't know when they'll come by. Newspapers make predictions according to slowest, average and top speed when the race will come by at which point....but in the end you have to wait and see. More and more people start coming out, start talking, watch the police man on guard, and wait together.

Then more and more official (publicity) cars start racing by, motorised police, more official road signallers come to block of the side roads, .... and we all wait. No Tour the France circus to entertain us.

And you start getting impatient and someone goes inside to check on the tv where the race is about. And then more cars come by and one of them carries the red flag on the roof "Wedstrijd!' (Race) and you can see the helicopters hanging in the air nearby.

Before you realise a head group of a few cyclers races by....zoof....gone
Seriously I didn't recognise any of them. 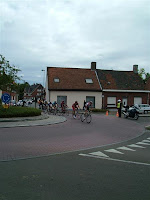 After a couple of more minutes (and many dangerously racing motorists and cycling team cars coming by with dozens of spare bikes on their roof) the peleton races by.
15 seconds later it is over.

hahaha...Actually no, the car with the green flag (end of race) didn't come even after 15 minutes. We heard rumors about a big fall somewhere and didn't have a clue if there were more cyclists behind or not. Being on the road for a cycling race makes you so ignorant! You really have no clue what happens. So we went inside and checked it out for a minute on tv and then we went to have desert :D 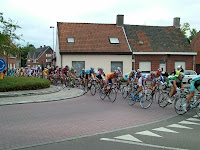 Tonight I heard that it all regrouped later on and that Tom Boonen has won the sprint.

Brillig said…
I'm with Jen-- it's all about the recap. I can't possibly focus well enough to have any idea what those colors that just whizzed past me are supposed to mean. Haha. Fun, though! I'd totally be out on the street watching!
25/8/08 18:39