Tourists in Ireland and at a Irish (&Scottish) wedding

15 months after attending a Scottish wedding Jan and I were now invited to another colleague's wedding...in Ireland. Since neither of us had ever been in Ireland we didn't hesitate long to take some extra days off to visit Dublin and the countryside around.
We started off in Dublin, armed with a Dublin Pass in our pockets that gave us free entrance to a lot of major attractions. We wore our shoes out at Dublin castle, Trinity, St Patrick's cathedral, Christ Church cathedral, The Guinness Storehouse, The old Jameson distillery, the Kilmainham Goal, .... No wonder we dropped back in our room each night at a very very decent hour, totally exhausted from all the sightseeing . No wild nights in Temple Bar for us! We walked it all by foot despite the traffic lights and pedestrian crossings that were definately NOT pedestrian friendly (pedestrian lights that are for ever red, even if the car lights keep on changing for all directions, ....crossings that are only on one side of the crosspoint so you need to zigzag through the city or race across without any help. Argghhh...small point of frustration in Dublin). But it gave us the opportunity to feel the city, the walk along the river, feel the busy city quarters and the more remote ones.

What to recommend? The Kilmainham Goal, the city center Victorian jail that was into use until after the Irish civil war in the 20ies. 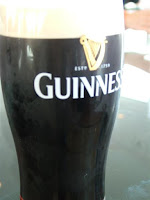 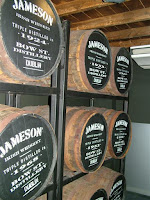 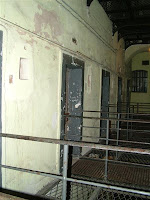 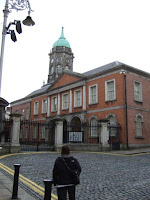 On our way from and to Cavan, we took the time to make some countryside stops to visit the countryside among other the megalithic tumuli in the Boyth valley (Newgrange, Hill of Tara, ...) as well as some ruins from medieval abbeys in the same area. 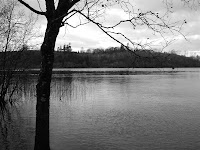 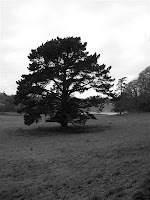 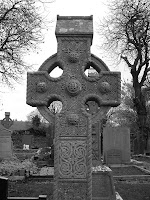 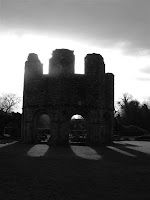 But of course our main goal was the wedding of this beautiful Irish - Scottish couple. 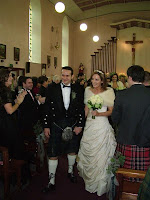 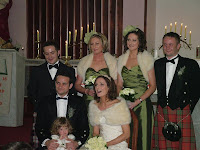 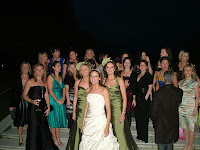 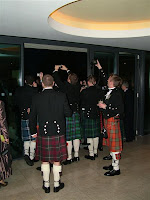 the bride and her beautiful friends....admired by the groom's tartan army present :)
It's always interesting to attend a wedding abroad to see the analogies and differences across cultures. As Ireland is a very catholic country, the actual service was very familiar.
The biggest difference (as was the case in Scotland) is the drinks that need to be paid by the guests at the bar during the reception (without appetizers) and the evening party. Even when it was the second time for us, it is still quite some culture shock.
The party after the delicious meal had a life band which gives a special atmosphere at the party, but it also restricts the music type variety played. But on this party it was the perfect mix: 2 hours with the band that let us swing and then followed by some hours of DJ work. And I've never seen a wedding with that many people on the dance floor all the time. The majority of the guests were constantly on the floor until the end! Coool. Must be the gaelic blood. Weddings with a lot of dancing are the best.
...and the party didn't end at 1AM as in the Netherlands & Scotland...but still earlier than Belgian ones. 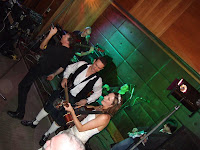 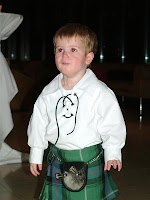 (this little guy was definately the cutest Scotsman I've ever met!!) 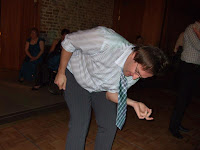 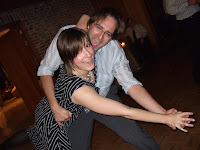 Jenn said…
This is one of those times I really wished I lived in Europe. How lucky are you that you get to spend a weekend in a different country with different traditions, different foods..... ahh must be the life.
19/11/08 06:03

Korie said…
Heh, yeah I was sort of dumbfounded by the resception CB and I went to in Turnhout in May. Not at all like any reception I'd ever been to.
And I wpent 2 weeks in Carlow, Ireland. It was fantastic...I've been trying to convince CB to go to the west coast and north to Belfast.
I think I was Irish in another lifetime.
19/11/08 09:20