Yes of course we've been good and we've put our shoe, so now our fridge is full of Sinterklaas goodies. Since half of my regular readers are non-Europeans, I'll give you a small overview of traditional Sinterklaas sweets in Belgium 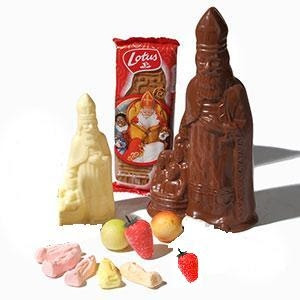 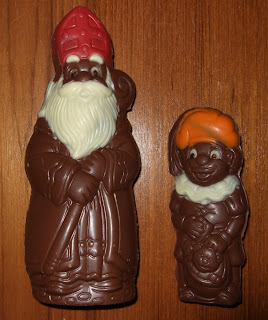 Chocolates....all stores and bakeries are full of chocolates and Sinterklaas often leaves them in one's shoe. He's a bit a vain man as he often gives chocolate that depict his own image! However he adapted himself to the Dutch more calvinistic culture and there it's the custom to give a big chocolate letter. 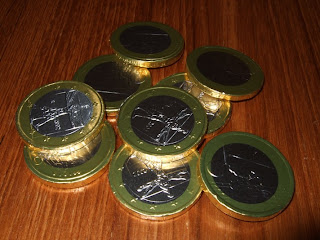 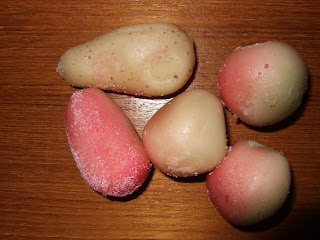 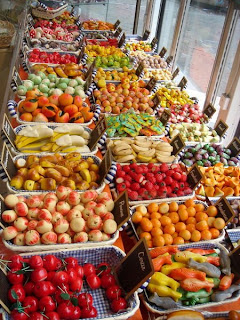 Marzipan fruits and other marzipan figures! The bakery displays in Belgium are a true delight for the eye at the moment!!! (and the stomac obviously)

"Mariaatjes" or Mary figures. I've never seen them anywhere abroad. The closes I can describe them is marshmallow...but they are not marshmallow though. 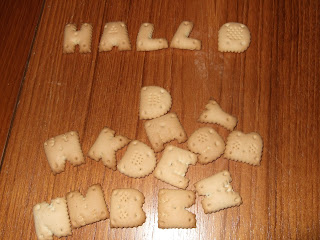 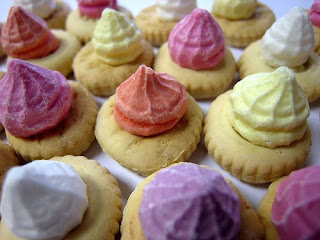 Nic-Nac's... or little cookies that get thrown out in great quantities by Zwarte Piet. There's the "letter" version or those iced gems with colorful sugartops.
Jan entertained his Scottish colleagues last week with Nic-Nac's. He was very popular. When I worked in The Hague I also brought big bags of Nic-Nac's to the office and my managers and colleagues remarkably had a lot of questions to come and ask....and they always left with a handful nic-nac's :p. It was tough for them to understand that around Christmas time I really could not find any Nic-Nac's anymore. Especially the iced ones are true Sinterklaas candy! 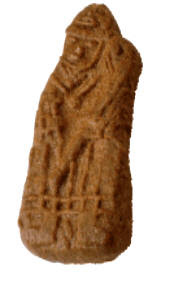 Speculoos cookies, once again often in the figure of Sinterklaas himself.
We eat speculoos all year round though as little caramalised cookies with herbs that are served with a coffee or at the breakfast table. A tv reality show for inventors had a "speculoos paste " as a winner which became a huge hype to the degree that a new factory had to be built and it has been elected "product of the year" by the marketing foundation. So we have a taste for Speculoos and at Sinterklaas we can get them in all sizes , shapes, forms and quantities.

One thing we do NOT eat at Sinterklaas is pepernoten. Sinterklaas knows the Belgians have good taste ;)

Jenn said…
Sounds like a delicious Christmas. With a dutch background we always have chocolate letters at Christmas and Speckulas cookies year round, but everything just looks so yummy.

Gudrun said…
The 'Mariatjes' are generally known as guimauves, although I haven't seen them abroad either.

The nicnacs are available here throughout the year, but only one brand though. Luckily for me, the iced gems are indeed only available in season.

marzipan figures said…
Wow I like the picture with the marzipan fruit baskets... really looks nice. Our company is one of the biggest marzipan figure manufacturer in Europe and I have never seen this picture before. Can you post the name of the shop and maybe adress - have to visit them.
23/9/10 08:55

Goofball said…
@marzipan figures:
I must honestly admit they are all google images taken from the internet so I cannot help you on this one.
23/9/10 09:24