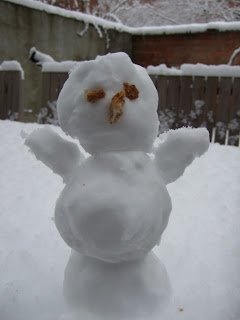 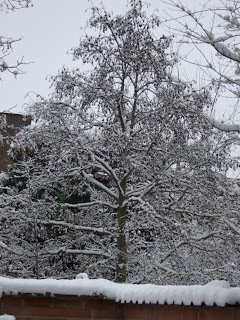 Wooohooo last years I so often complained about our sad, wet, grey, soft winters. But this time it's really making up. Most of december temperatures were fluctuating a bit above and below zero degrees. We had already a one day of snow in November that I won't forget lightly (grrrrr).

Last weeks all little lakes and ponds got frozen and the Dutch are becoming visibly nervous in their speculations whether they'll be able to organise the 16th "Elfstedentocht" 100 years after it's first edition (and 12 years after last edition).
And this morning we woke up to a snowwhite world. 4 inches of snow. We Belgians do get quite excited about it if we don't need to drive (yes yes, it's pathetic to all you who are used to northern weather climates but for us it's a big deal!). I had luckily a free agenda so I didn't need to join the 400 km of traffic jams right away as I could log on at hime until noon and then enjoy the cleared highways much more smoothly.

And white landscape is going to stay as tonight it's going to freeze -13C and it'll continue freezing for another 4 days. Oh my gosh that's cold. It probably has not been that cold in a decade (aha they just confirmed that in the news, it'll be the coldest night in 10 years time). Brrrrrrrr. I do hope there not too much snowslush around that will get very icy and tricky now.

But as long as I don't get into any winter traffic chaos, I am quite excited about having a real winter again for the first time in a long time and to walk through cracking snow in the park to the sportscenter.
Email Post
Labels: Weather gods