Last Sunday, yesterday and today the Tour de France crossed Belgium again. It had been 3 years since we had seen the arrival of the French crazy cycling circus in Ghent. When we learned this winter that they would pass through the Ardennes we knew we wanted to see them pass there.

Thanks to the tour, the travels of Q crossed our path again and he joined us in camping at our new vacation spot before he went on again chasing the tour.

In the afternoon we left as well and drove with a big circle around Stavelot where we feared it would be too busy. We ended up in Wanne where we could park along the road as close as 350 m from the parcours. 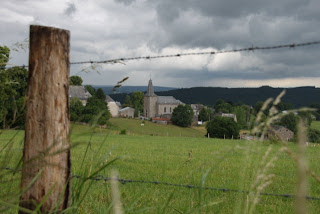 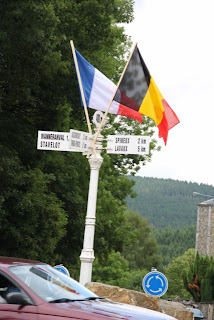 We had just missed the publicity caravan so we continued walking to the Côte d'Aisomont, a climb of 3rd category just before the village. The line was just finished getting painted. Quite an international crowd with mainly Germans, Dutch, Luxemburgers and Belgians had gathered along the road in good atmosphere even though it started pouring just before the passage. 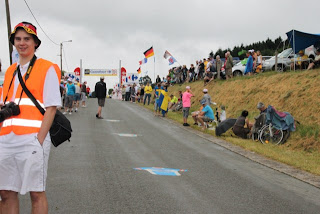 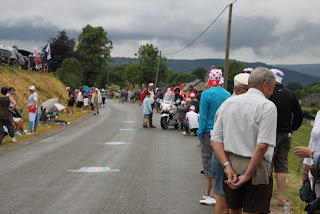 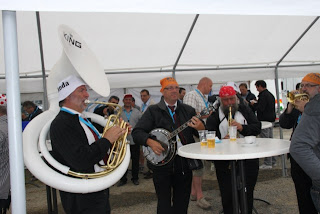 Finally the helicopters clearly approached and more and more tour cars & motorized police came by, rising the tension that the cyclers were approaching. 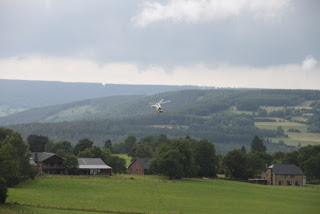 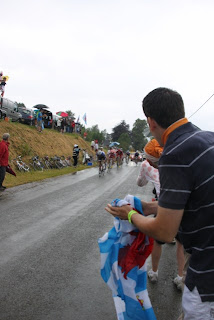 And 1.05 minutes later the peleton arrived and zoooooooofffed by in a blink of the eye. Fortunately I have a sport button on our camera that just keeps flicking pictures one after the other :p 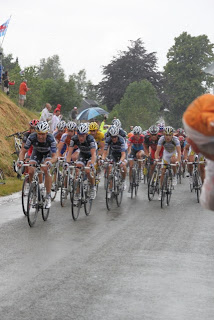 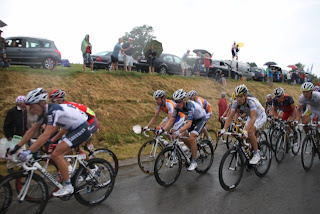 A couple of famous butts in a row: '1' = Alberto Contador , '21' = Lance Armstrong, the yellow shirt belonged to Fabian Cancellara , '11' = Andy Schleck and '16'=Frank Schleck who unfortanately broke a bone in his shoulder today in a fall and is out and in the hospital at the moment. 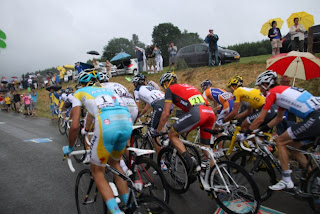 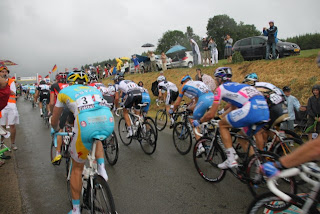 The number of cars in the race is insane...I wonder if they have one car per participant or so. 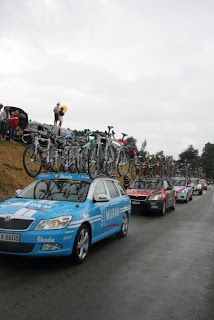 The tail of the race 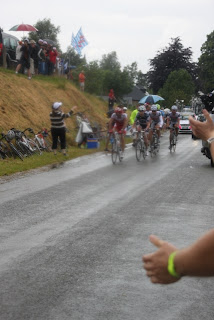 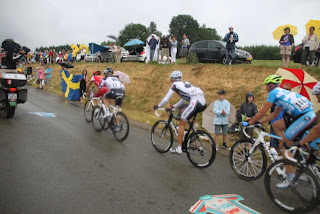 Count the helicopters... there were 8 flying above us 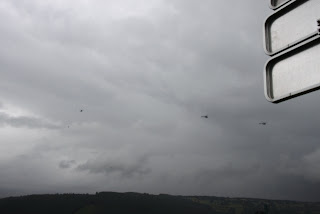 We had to rush to take a picture : as you can see the finish flag for the Côte d'Aisomont is already down. Clearly no time to loose in the tour! 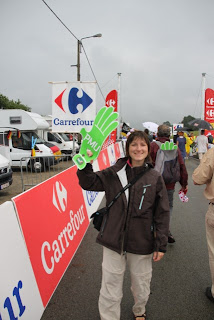 We followed the remaining 34 kms of the race on tv 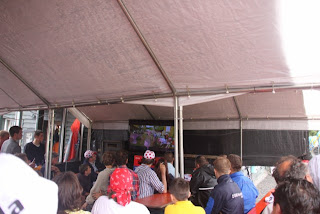 Unfortanately a few kms from us, in the descent of the Côte de Stockeu, there was a spectacular fall where a lot of favourites smacked against the asphalt. The entire peleton was split up in groups.
For a moment the tactical dilemma's were quite interesting: would Fabian Cancellara chasing the head of the race to defend his yellow jersey and by doing so risk his team mate Frank Schleck loose a lot of precious minutes or would he slow down and allowing Schleck to rejoin the peleton while giving in fact a green card for the cyclers in front to win the race. who would decide that: himself or the team manager? How would the other teams respond?

It became the latter choice: the peleton all of a sudden clearly wasn't racing anymore but was peddling a nice slow rhythm allowing all the groups behind to steadily catch up with their hurt & bloody joints. Pretty boring to watch but to some point I understand that they don't want the tour to be decided on day 2 due to such an accident. Still remarkable that the Saxo strategy was followed by the other teams. Saxo claimed the need for "solidarity" afterwards, other teams claimed intimidation.
Falling accidents are part of the race, the turns and descents are known beforehand and it was a wet day so it's their job to take that into account. If some unknown helper instead of a favourite would have gone down, the peleton would have never waited. So it's quite discussable.

However when finally everyone was caught up ....they didn't even race for spot 2 and 3. In a big broad line with Cancellara holding his hands wide open to prevent anyone from starting to spring, they crossed the line together. How lame....I truly didn't get that at all.
Email Post
Labels: Fun activities Sport

Jenn said…
Great pictures. I agree with you that I don't really get what they did.