2 years ago Leuven would join a lot of other Flemish cities to be auto-free for a day and the local neighbours , who all live along the same busy road, started organising a neighbourhood party with lots of activities to profit from the occasion.   However 2 weeks before it was about to happen , the city of Leuven cancelled part of their plans because they figured it would hurt the downtown businesses if some major roads were traffic free as well. Bullocks...needless to say the neighbours were hugely disappointed to have cars driving by after all and we simply went diving instead.

Last year I have somehow missed that there has been a traffic-free day in the summer but now I had heard from it and Jan had found a note from some neighbours that they'd do a drink in the middle green park.

So we came back from the Ardennes to Leuven where indeed across the street all cars were banned, leaving a very very empty street. Not quite what I had expected. Just a few kids down the street riding their bike  and crashing down on the asphalt but the damage didn't seem to be more than lots of scratches for the kid when we checked it out. The traffic stewards that guarded the fences at each intersection had the text "event and crowd support" on their back....it seemed rather ironic. 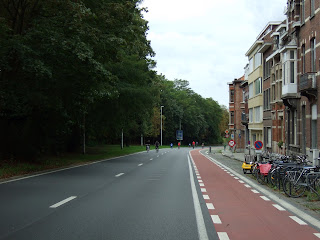 We went for a walk downtown where there were more people out as there were some practise circuits for little kids bikes, info stands on Cambio (a car sharing program) or special bike types etc and in the main shopping street some weird sculpture invited you to sketch your dream city. Still, the activity downtown wasn't exactly buzzing. Maybe we were on the road too early as some stuff would only start later on and a lot of neighbourhoods had local parties in their streets. 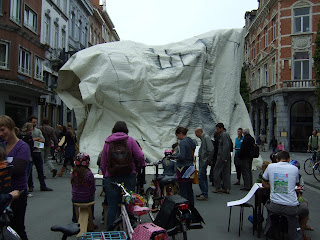 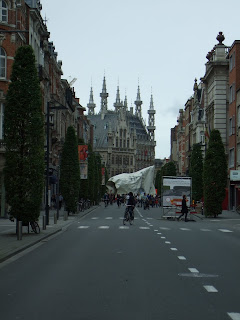 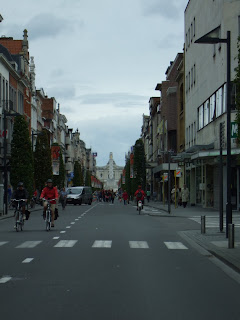 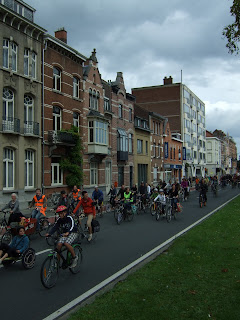 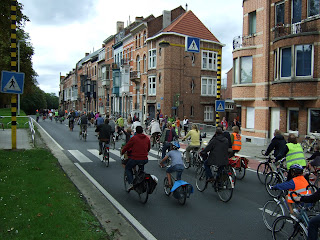 Arriving back home some neighbours had gathered outside so we went out to meet them. City life along a big road, with some houses populated by ever changing student residents isn't always very optimal to get to know your neighbours easily.    But everyone had brought out some food and drinks and it turned out to be a very nice afternoon. 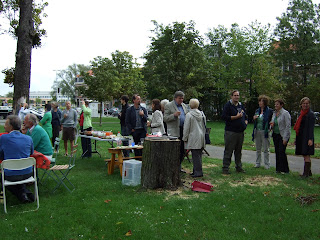 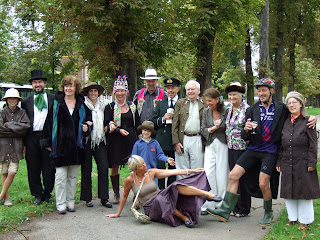 Afterwards we went downtown once again to enjoy the opportunity of a free visit to Museum M.
Email Post
Labels: Leuven