Brushing our teeth with Cars

We've never really had an issue to teach our children that they must brush their teeth before bedtime.  As of the appearance of their first teeth, they got a toothbrush in their hands each day.  The fact that they can stand up in the bathroom in between the 2 sinks, in front of the mirrors is a bonus.
But it's much harder to teach them to properly brush their teeth. This is exactly the same conclusion as Erika Van Tielen  made.  For some reason they just seem to suck    the toothpaste a bit and then they are "done" and ready to play with the water tap and splash around a cup of water.  My endless repeating that it is not a race, that there is not a virtue in being done quickly and that he has to cover all sides etc  didn't seem to hit ground.

Since my dentists seem to be happy about the fact that I brush electronically, I wondered if that would also be better for children.  Additionally I wondered if the Disney Magic Timer app would be a benefit to them as well even though it feels like you are just joining a big marketing trap for parents.

While I was still debating all this in my head and planned to maybe buy a Cars toothbrush for Kabouter's birthday, Jan already brought one home this summer. He's a man of action.

And so it happened that Kabouter now always brushes his teeth in front of my phone, eagerly curious which new Cars image would appear after 2 minutes. If the app was launched before his toothbrush, I need to reset it. It is no longer an issue to brush for 2 minutes on the contrary, but now I need to double check that he actually brushes, and not just sits with the turning brush drooling in front of the phone while commenting on the Cars images that appear. And Beertje just stays alongside of him nibbling on his little toothbrush for as long as Kabouter is occupied. We've not yet managed to teach Beertje to actually move his brush along his teeth (and oh gosh, don't you try to help him do it!!)

So conclusion: as commercial a Disney branded toothbrush is and as silly as a little counter app is...it does seem to contribute a little to better brushing as they no longer do a rush rush job. It does not impact the quality of their brushing however. 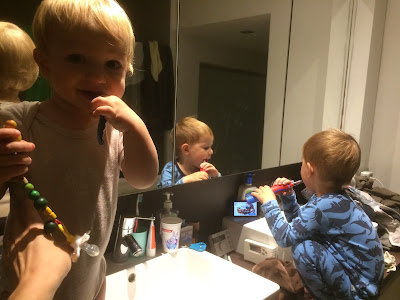 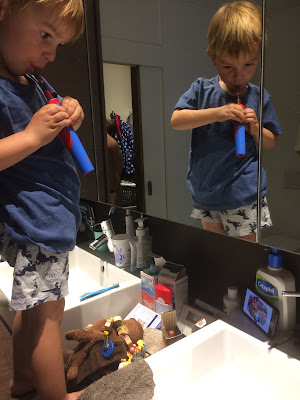 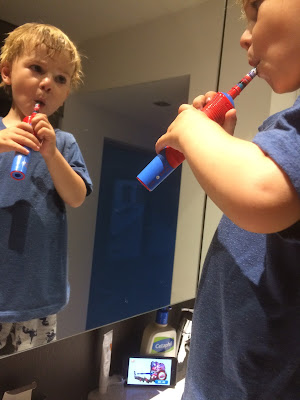