During our past vacation we did not only relax at the pool. We've also done one excursion. One :D.
Towards the end of the vacation, the weather was a little cooler and cloudier and we noticed immediately that our children didn't spontaneously go into the pool that day.  While they were hanging out around our pool chairs, I suggested we could go somewhere.

Half an hour later we were somewhat ad hoc in the car, driving in the direction of Mogàn and the windmill, its only remarkable landmark so it seemed on the internet. I figured we'd go and check it out, and be back in the hotel within 2 hours maximum.

While driving, Jan said "There's somewhere a cactus park around, can you find that?".  Some googling later, Waze told me it was about 20 kms further.  We hit "Drive" and went on. Just when we took the exit in Mogàn for highway GC 200 that clearly started to climb up the mountain hill, it hit me that a 50 minute drive over 20 kms didn't predict much good.  Oh well, we probably had to get over that mountain top and that's it. The children had just fallen asleep in the backseats so we continued.

We turned, and climbed and turned and climbed ...and I hated every minute of it, clunching tensely the bar of the car door. "Keep breathing in and out", while I focussed on the rather spectacular rock formations sometimes in bright green (oxidated lava apparently).  After one ridge we descended only to climb another one behind it. Damn it.

My stomac kept it together and I relaxed a bit while I saw us approaching our destination (nope, I tried not to think about the fact that we had to return as well).  Then Kabouter woke up in the back with a moan "Mommy my belly hurts".  And then his stomac didn't hold it anymore. Hurraay.

Fortunately, we could park a few minutes later and I had some spare clothes and water and tissues in the trunk so we could refresh the boy. His smile was quickly returned. 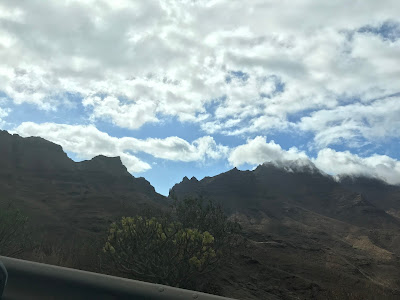 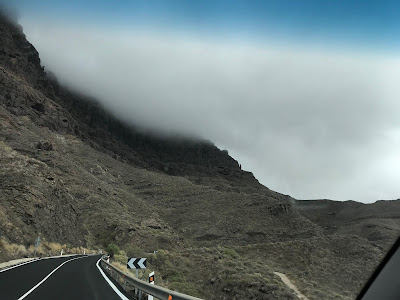 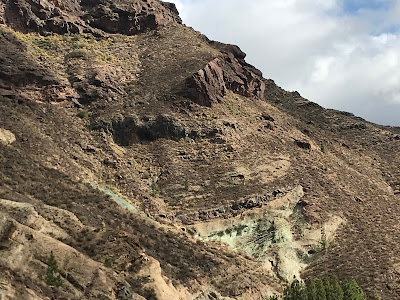 The Cactualdea park is a 15000 square meters park with an impressive collection of cactusses from all around the world in all sizes, shapes and colors.  It's also the home of some poultry that loves being fed by the visitors and a donkey that comes to say hello. For 2 euro's small bags of seeds are sold at the entrance for that reason.

Beertje enthusiastically marched amidst the eager ducks and pigeons while his older brother was cheering on him from a safe distance. I sort of had to push him forward to make our way along the trail past the poultry.

The white donkey was greeted with a lot of eager and he approached us to get patted on the head. 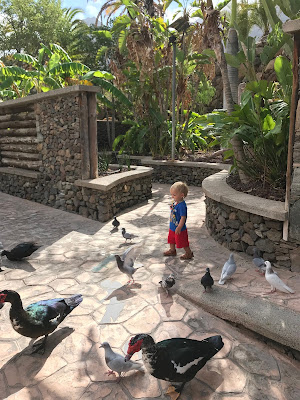 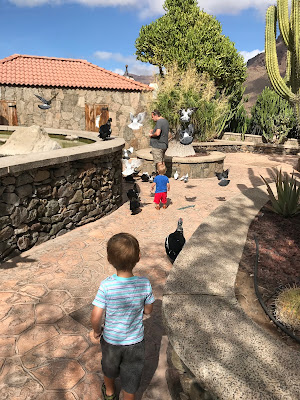 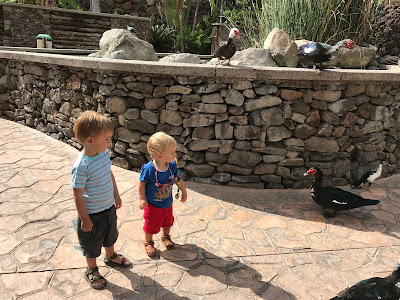 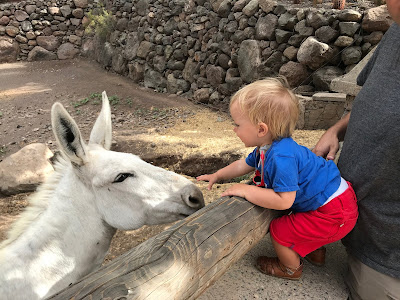 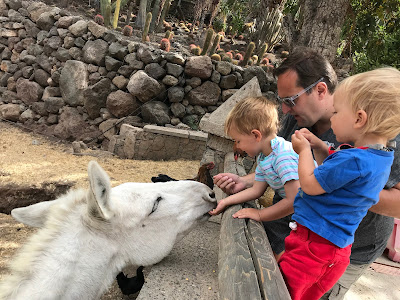 The Park holds a replica of a traditional cave where prehistoric canarii used to live. 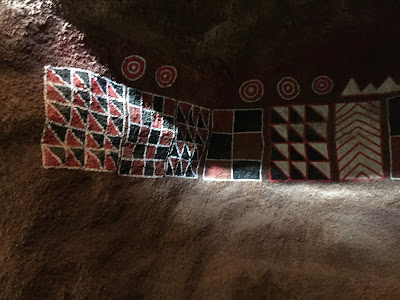 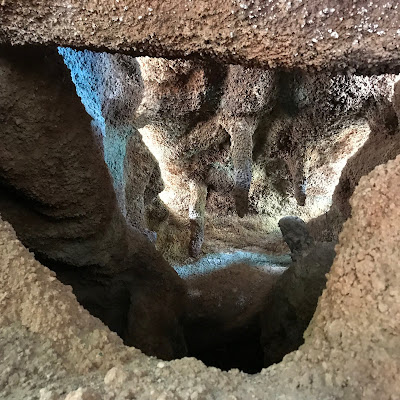 It also has a small theatre that was completely dead right now, some empty glass houses, a bar (according to Tripadvisor with good food and great juices) that also looked quite dead when we walked by apart from 2 suntanning Germans. At that spot there is free WiFi which is good as the mobile phone signal was really bad.

But the park is mainly about cactuses...and cactuses there are in all shapes and sizes. Apparently there is more than 12000 of them. To really get the feel of them all you need to climb on some lava stone paths which wasn't very practical with the 2 little ones tailing us. We also arrived rather late in the afternoon.  So we didn't do all that much visiting to be honest, but I enjoyed the part we saw with the mountains in the background and some threatening clouds. 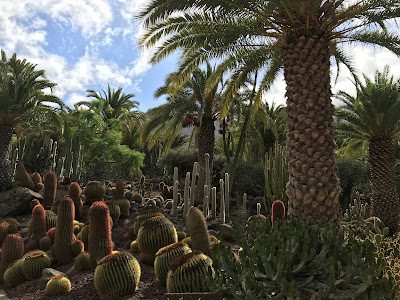 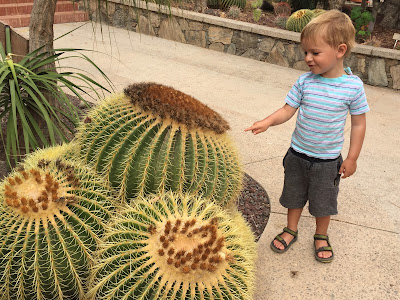 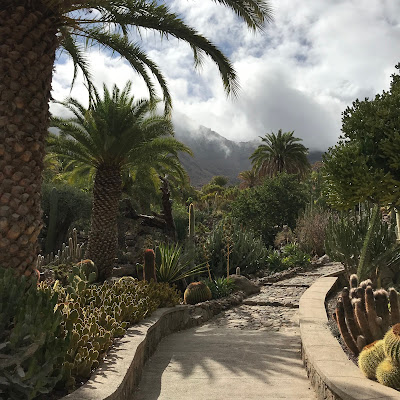 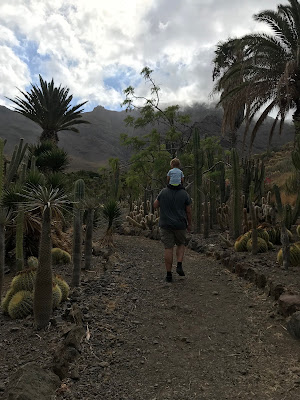 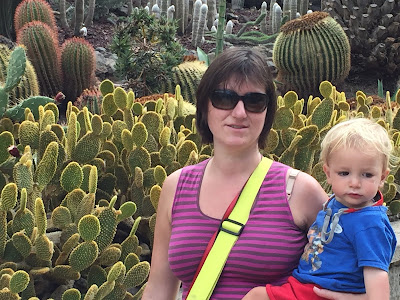 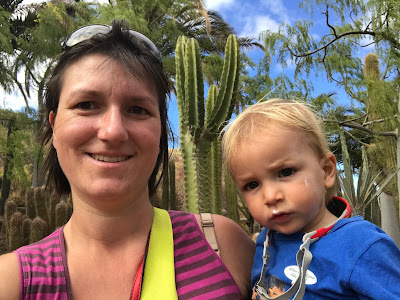 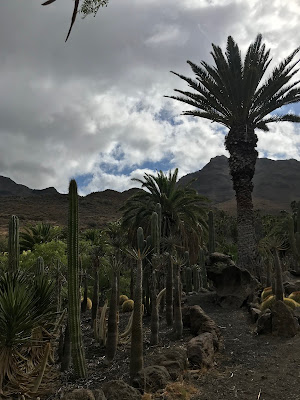 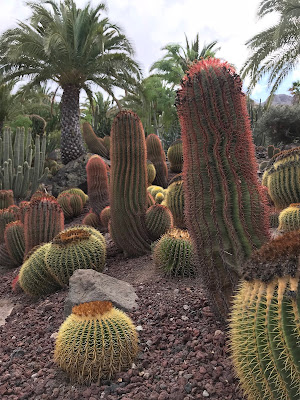 PS: we made it back to the hotel without any further sickness incidents, but I was truly relieved to be out of the car. Personally I'm not a fan of the road there, so I do feel we should have stayed longer in the park or on that side of the island to make the ride more worthwhile. But I do recommend the park for people that love driving in the mountains.