Discovery of a small waterfall near Porte de Drossart

We had enjoyed autumn in the Ardennes yesterday by spending the afternoon bagging some tons of leaves but I felt like making a small walk in the woods before driving back home today.  In autumn I'm always on a quest to find nice mixed forest that would turn colors as most woods in the area are pine.

The drive from the Signal de Botrange, Belgium's highest point down to Eupen through the Hertogenwald is always magnificent so I wanted to have a short stop there. 2 years ago I searched in vain for the red trail across from the parking lot at Porte de Drossart, down towards the river feeding the Gileppe.  I studied the maps again and decided to give it another try.

So we crossed the highway and entered the small asphalt road gently descending at first.  I knew the trail would be way way too long to complete, so we'd just descend for a short while until we approached the river and then turn back on the same road back to the parking lot.  After a short while I crossed the dirt track I now recognised from the maps and I found the red marker that I had searched for 2 years ago.  Then I could see the road would descend and bend towards the right as anticipated.  We could hear water running on our left where there was apparently a valley out of our sight.  But just before our road turned to the right, I was surprised to see from the other hillside across that small valley a small waterfall coming down. Cool suprise!

It was my guess that we'd approach the riverbed closer a bit further down so I continued further downhill. Indeed, in the riverbed in a beautiful autumn deciduous forest came closer and we got a glimpse of the river.  And we saw another tiny waterfall on the other side of the valley.

Then we turned around.  And then I cursed that we had descended way more than I had realised and I had to push Kabouter in the stroller back up while carrying Beertje on my belly. OMG...I am so out of shape. I really had to grasp breath a few times but we made it back up to the parking lot from our silly short walk. 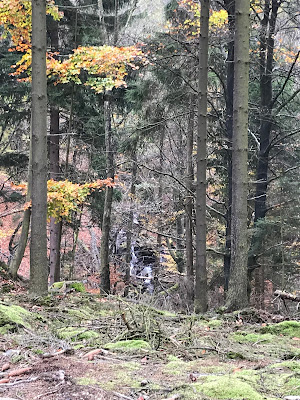 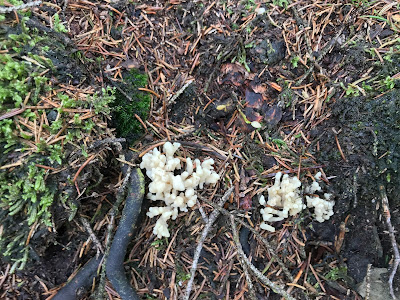 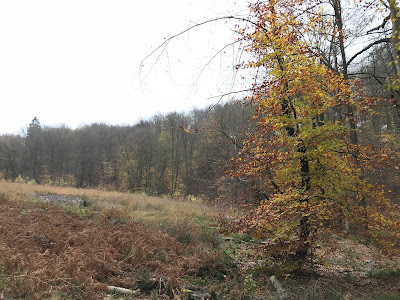 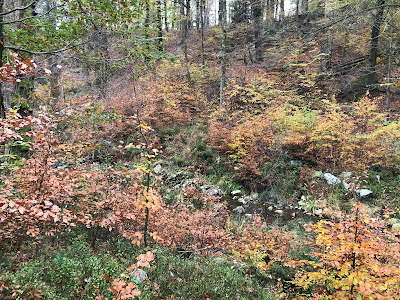 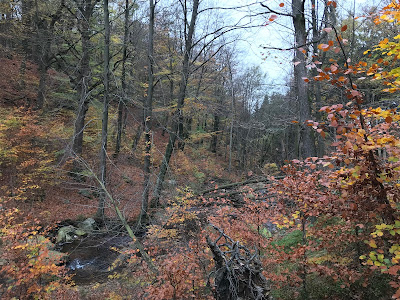