The Icefields Parkway, the highway connecting the town of Jasper in Jasper National Park and Lake Louise in Banff National Park, is considered the best scenic drive in the world.  It's one of the must do scenic drives in your life. It is bucket list material.

Jan and I had already driven part of it in 2005 from south to north, but due to limited time we had to turn around and return. I remember that I often exclaimed a loud spontaneous "Woooowwww" during that drive and that I was so disappointed running out of time and having to return.  Needless to say I was very thrilled to drive the entire highway today.

The day before I was cursing a lot at seeing the forest fire smoke from Alberta take away our view and I prayed that we'd have some visibility on these gorgeous views today.  It would be so ironic if we'd take this drive with limited visibility.  But fortunately the smoke cleared up (or the wind blew it further west instead of south into the Athabasca valley) and it turned out to be another gorgeous day.
A day where we drove from viewpoint and interest point to interest point...some of them shown below. 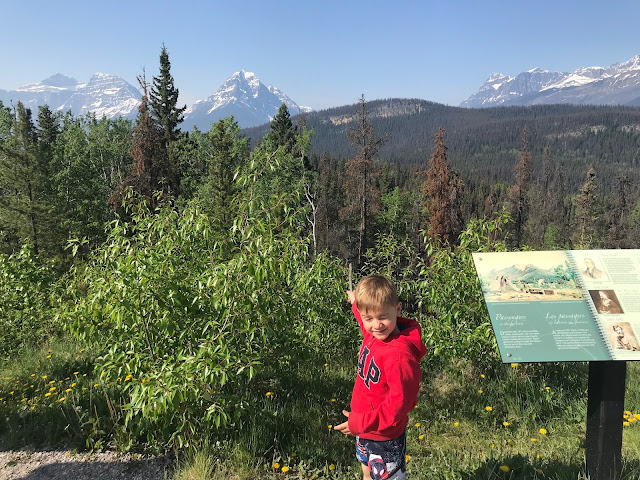 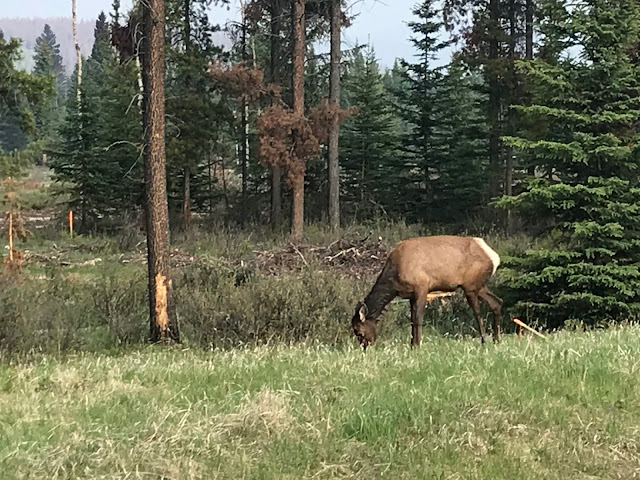 Athabasca Falls
While the previous day we had failed to drive to the Athabasca Falls due to an accident, we reached the popular place this time early in the morning. While it was still a bit chilly we approached the water mass of the Athabasca river falling down into depth and spraying it's cooling mist on us. 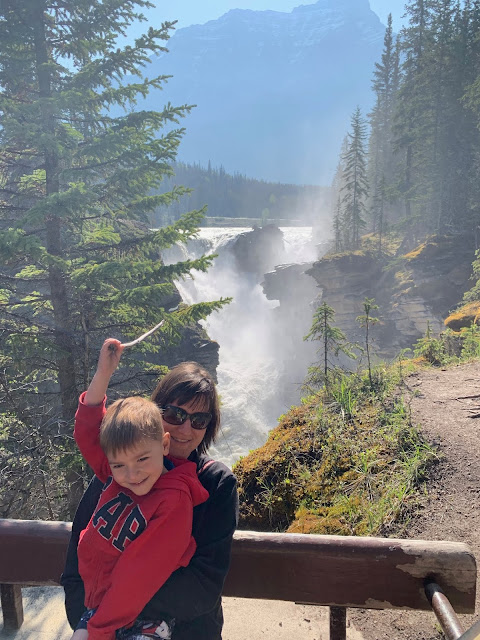 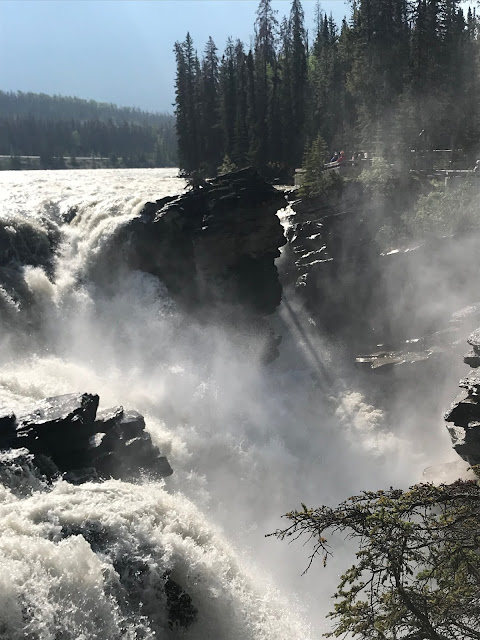 Sunwapta Falls
A few dozen km upstream the Athabasca river takes another impressive plunge down , to turn down below with a big bow due to resistant rocks 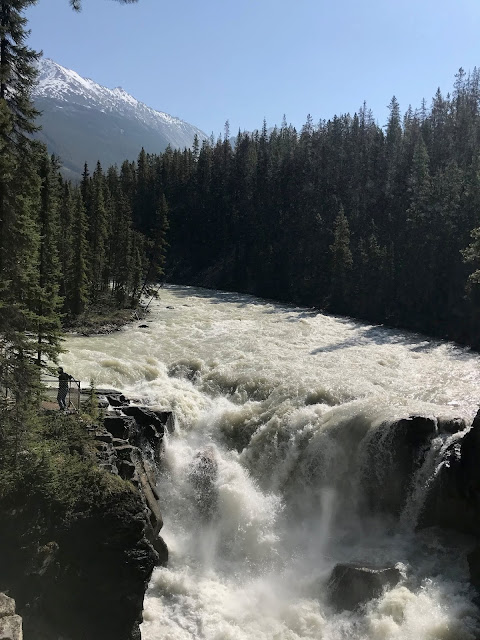 Even though you are not supposed to stop on the highway when spotting wildlife...seeing a car pull over is a very good indication that there's some bear or other wildlife to be seen.  When you notice an entire congested zone with lots of vehicles pulling over and leaving again and people getting out of the car...we sure are slowing down and I'm sitting with my camera active!

The fact that so many people were out of their car and some were setting tripods told me it was not another bear in the ditch as so often (even though there's pretty stupid people out there)...and then I cried out  "an elk...nooo a moose, it's a moose, it's a moose over there in the river!!".
"Ok I'm not going to stop for an elk, but for a moose I sure will"

We were so excited. On our previous 3 trips we've searched for moose so badly without any luck. With the children we maneuvered out along the highway among the other tourists in a big chaos that was created there (at one point buses had stopped on both sides so no traffic could pass on the highway anymore) all in order to spot in the distance on a little island in the river the big impressive animal quietly wandering around a little and minding its own business, oblivious to the traffic chaos it created.

But hey, we've seen a moose! Trust me, even if I only have  a crappy butt picture in the distance :). 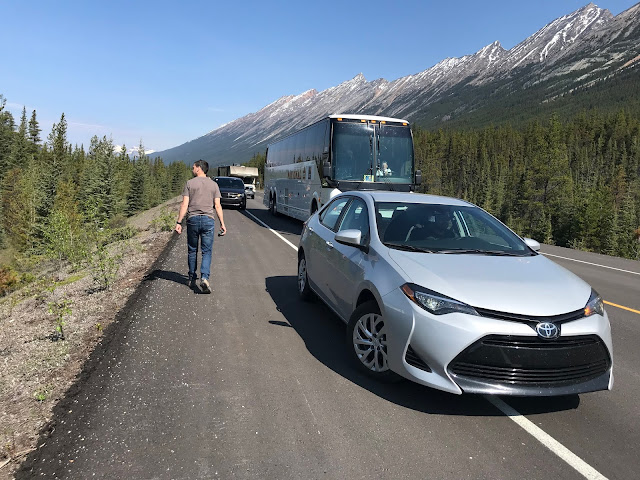 This is a point both Jan and I remembered from 2005 so as form this point onward we were travelling a road we've travelled before. 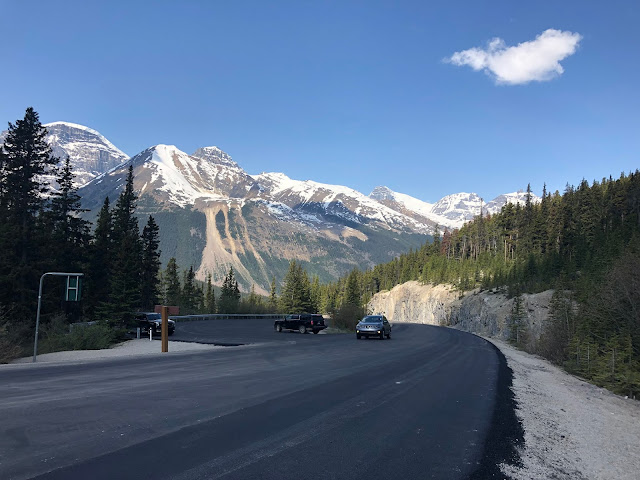 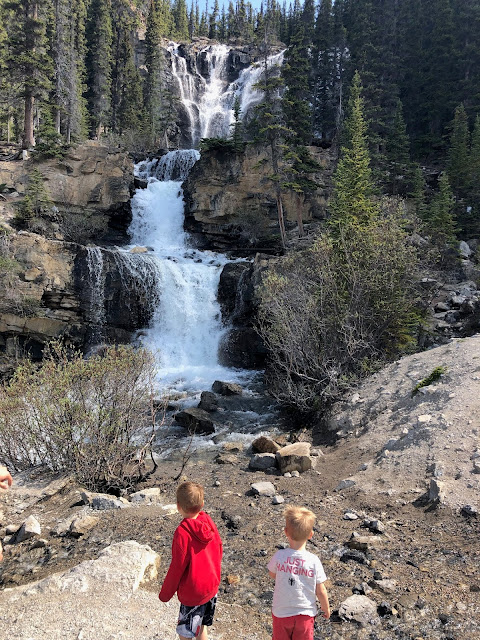 Near the Sunwapta Pass at 2030m, the Parkway passes a series of 8 (!!) adjacant glaciers from the Columbia Icefields.  These are the icefields that gave the parkway its name and hence it's the most important attraction of the road.

At the visitor center we booked tickets for an Athabasca Glacier Tour. Ouch...very pricy.  But the parking lot from which we could still access the start of the ice in 2005 now only let you climb to a viewpoint anymore. Unfortunately the glacier has retreated too much. So if you want to access the glacier you must book a tour at a specific hour.

We had half an hour before our tour would start boarding so we quickly had lunch and used the washrooms as ...there are none on the glacier ;).  First we boarded the ordinary buss that crossed the highway and took us to the transfer point where we then boarded one of the special ice explorers. In 95 those explorers still left and took the entire tour from the visitor center but that clearly isn't the most efficient thing to do.

The specially designed explorers first climb slowly the huge side morraines of the glacier and then takes a deep descent of a whopping 30%. We drove through a little melting stream (a deliberate choice to wash off all dust from the explorer's tire and therefore not to pollute the ice and make it melt faster) up to the visiting point at the glacier. There you can explore for half an hour the confined safe area.

The weather was as announced 10C colder than on the highway but we had one of the best days of the summer so it was very nice out there in our sweather.  Good thing though to have switched all of our sandals in solid waterproof shoes!

The view was magnificent with outlook on the neighbouring Columbia icefield and the Andromeda and other nearby hanging glaciers. The glacier colors varied from white, grey to blue and green. Wonderful.

After our visit we returned with the Ice Explorer to the bus transfer and then by normal coach we'd head to the Skywalk...after the herd of silly mountain sheep decided to get off the road. They massively camp on the morrain to lick the stones for minerals. 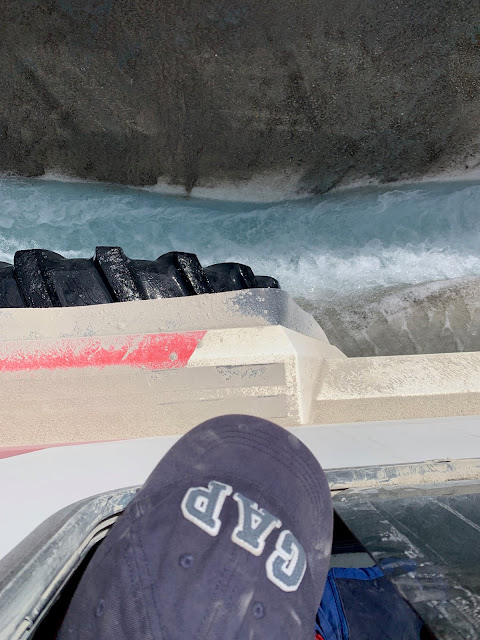 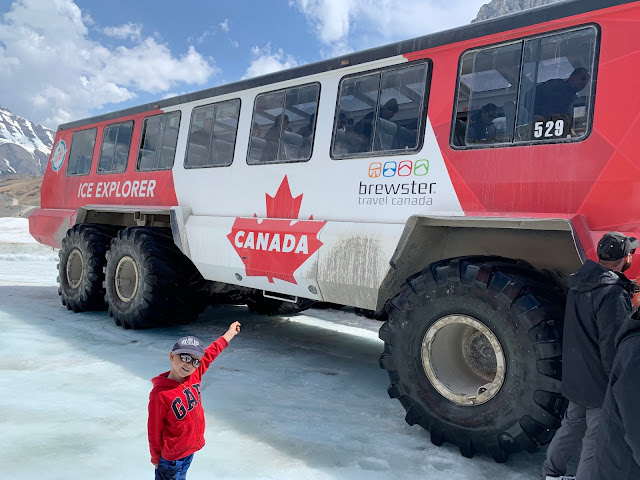 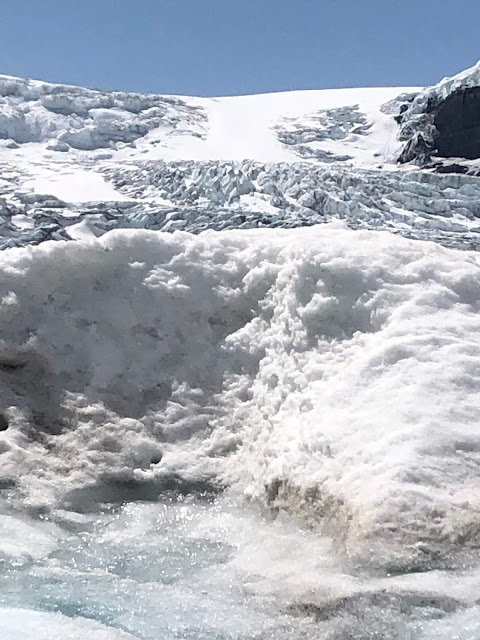 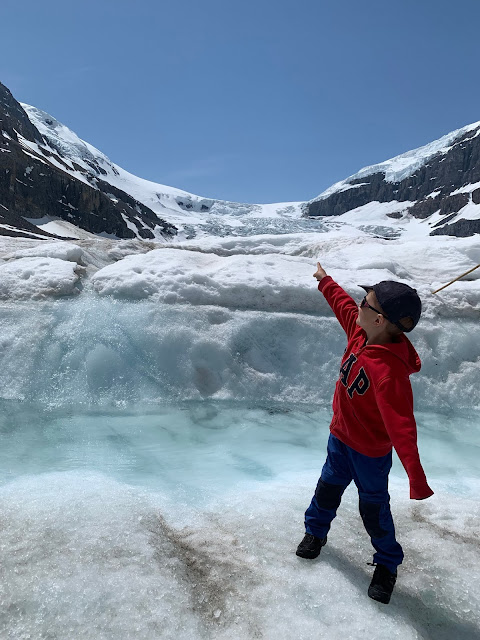 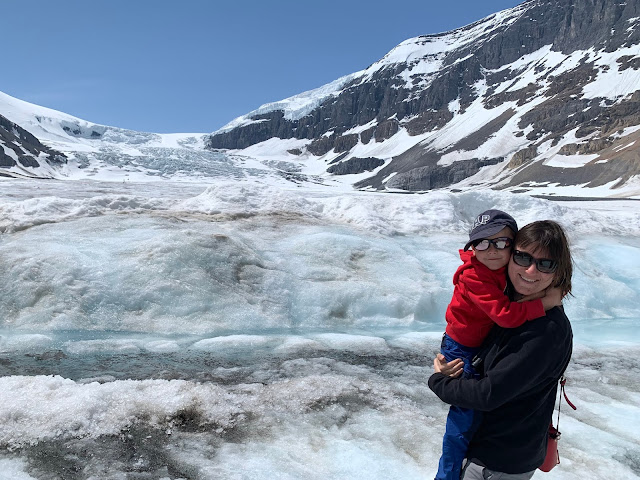 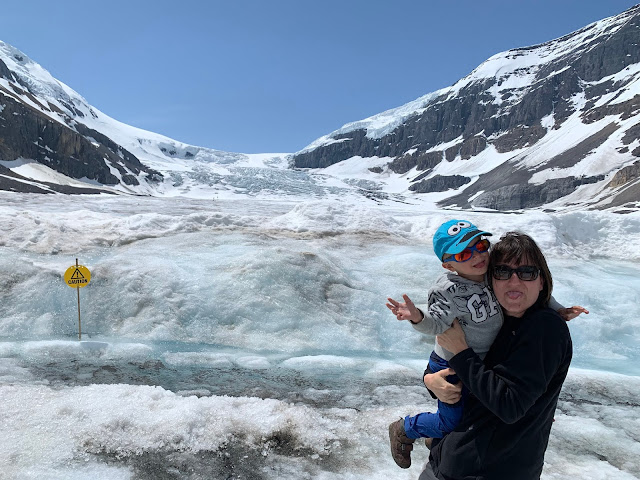 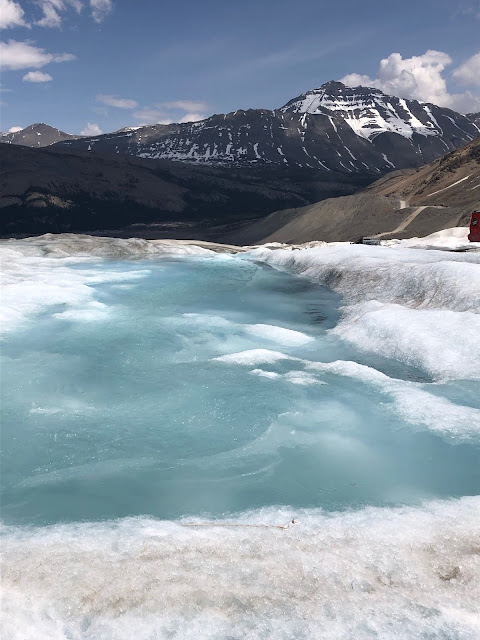 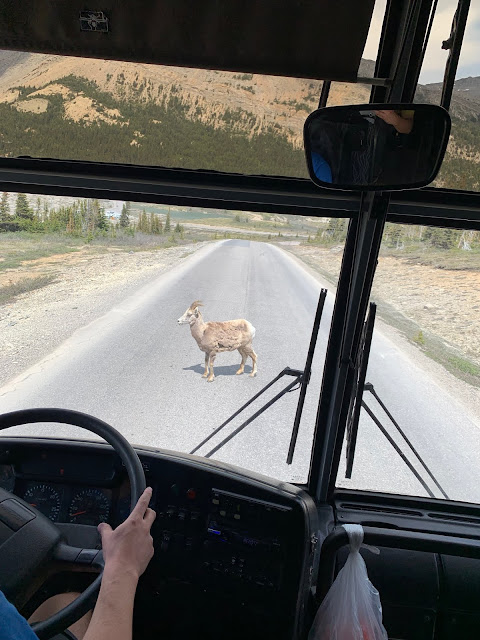 The Skywalk is a new attraction that opened in 2014.  A few kms from the Icefields, a glass platform takes you about 300 meters above the Sunwapta valley below.  When Jan booked the ticket, I mumbled that it was a waste of money since I'd definately not walk on that.   But I was on the bus so I went to have a look.

While I was enjoying the views on the nearby glaciers and the white-capped mountains along the non-glass walkway above the rocks, I saw Jan and Kabouter goofing around on the walkway from a distance.  I brought Beertje to them, grinned for a moment for the picture and shuffled onward along the glass walkway while looking firmly ahead of me and holding on tightly to the railing.  Eeeks....it's not my cup of tea, but I did not take the non-glass shortcut which is available as well. The pictures are made by Jan in case you wondered. 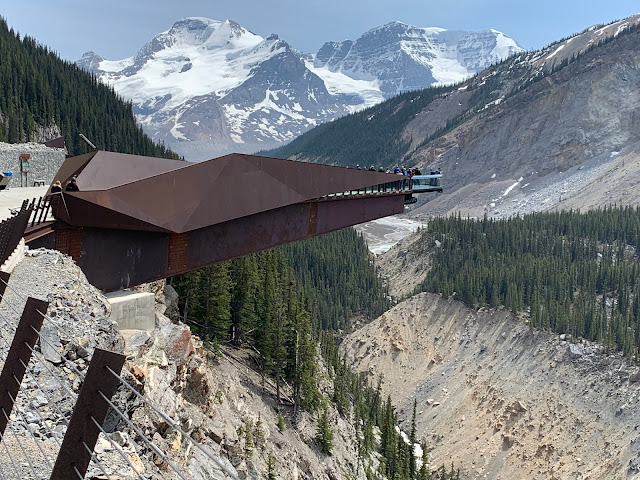 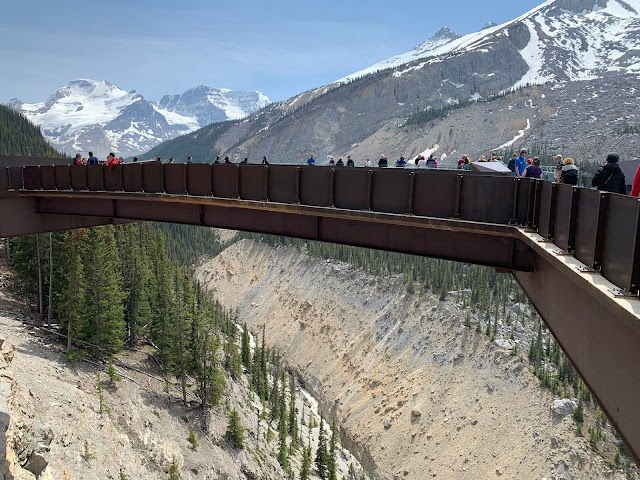 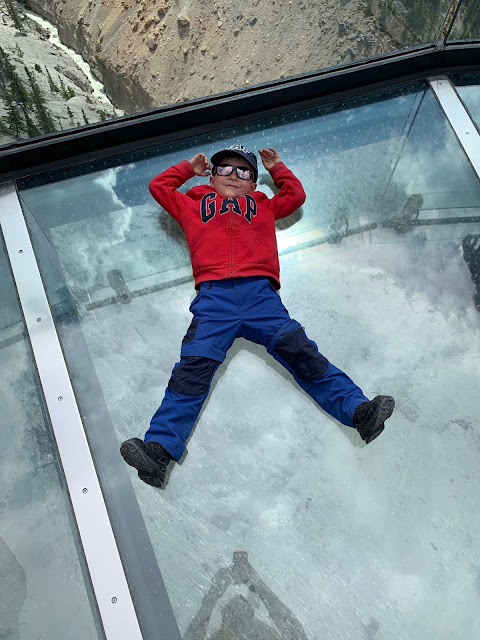 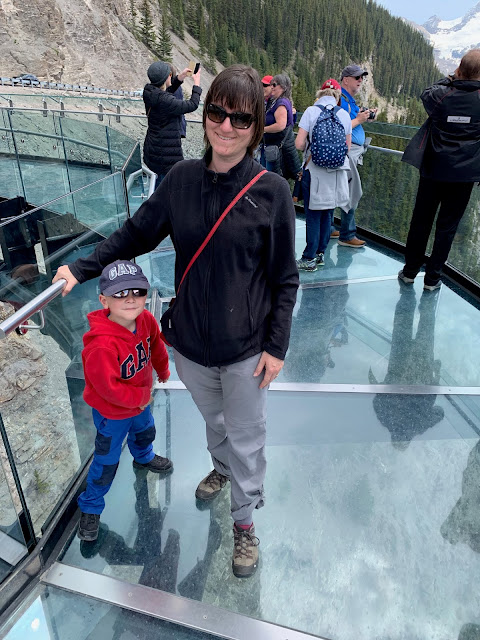 Once we crossed the pass we lost the Athabasca river which had been close by us for the last 3 days and we found ourselves on the other side of the triple continental divide. From now on we were in Banff National Park and we entered the Bow Valley.
After all the visiting and walking the children took a nap and since we still had quite some road to munch to reach our hotel we took some less stops. The scenery was nonetheless still stunning. 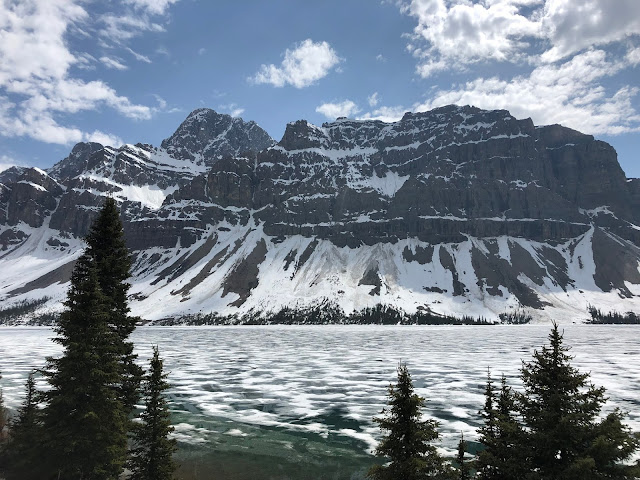 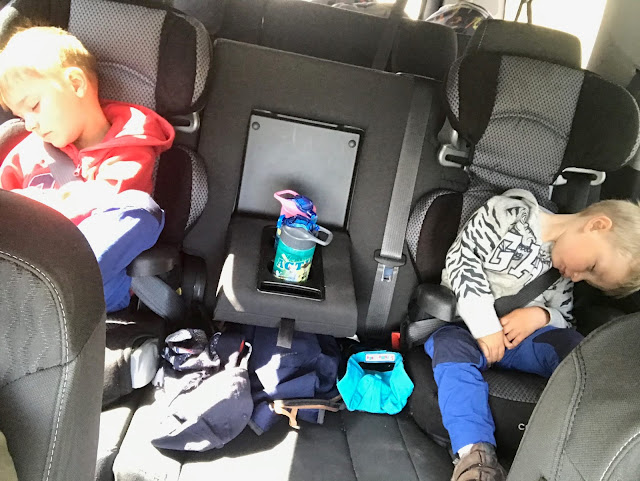 Big disappointment of the day was learning that Peyto Lake was inaccessible for the summer. The most pitoresque green lake, the iconic calendar or instagram worthy view was not to be visited. I had read it in the Jasper news magasine but had hoped to be able to stop anyhow but the parking lot signs were smartly removed, the entry road masked and before we realised it we were on the other side of the summit without getting a glimpse of this gorgeous lake.  We simply must go back now.