My dad's mother was born in an area that was totally destructed by the first world war battlefields.   In the years after the war all my grandparent's siblings with the exception of one, as well as my great grandmother, emigrated one after another to Ontario in Canada to search a better future over there.

My grandparents had 2 girls over there and lived closeby the rest of the family.  However in the 30ies they've decided to come back to Belgium because of some (ill?) relatives on my grandfather's side that were still in Flanders.  And so my grandparents and there 2 preteen girls moved back across the Atlantic.  Years later they had another child...my dad.

My grandparents and my aunts always kept in touch with their sisters and cousins in Ontario and in the 70ies they've had the opportunity to go and visit everybody again and there's also been some Canadian visitors in Belgium.  My sister also extensively visited all of our Canadian relatives at the end of the 80ies.  However while the first & second generation got older and older and had larger and larger families of their own that scattered around the country, the contacts became much more sporadic and contacts with the next generation got lost when some of my dad's aunts and uncles and cousins passed away.  Only very few contacts remain but I couldn't miss the opportunity to use the few e-mail addresses we still had and get in touch while we were travelling through Ontario.


And so I had nice dinners with a few of my second cousins and their children  and I also got to meet my dad/aunt's cousin Laura.  It was so fantastic to finally meet those names that I only knew from our family tree mainly or at best from FB chat. 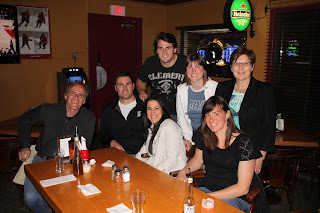 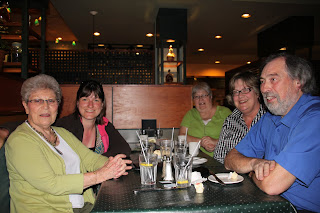 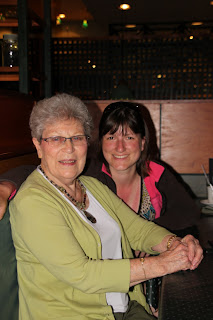 Snooker said…
How great that you got a chance to re-connect with some family. It really is something our generation is not doing like it should.
10/6/11 12:59