A year ago I was stressing to ensure the baby bedroom furniture would get delivered in time as I wanted to have the bedroom ready at least a month before the scheduled due date. After all, it is quite possible and normal to deliver a baby 4 weeks early and the baby would need a place to sleep as of day 1.

I had a colleague who had become father recently and he commented that you really didn't need much for a new baby at home. I had read a similar remark on a blog as well  "eg  the baby sleeps in our bed...". The thought to have the baby sleep in the same bed as me seemed rather strange and I disregarded it immediately. Nevertheless I realised more and more that the "first weeks" it would be practical to have a portable crib or so in our room so I wouldn't need to run around through the house when I was still breastfeeding and feeding a lot at night. I had heard in the hospital sessions that babies can drink up to 12 times "in the beginning", so then it would be better to have the baby closeby.  One of my young mother friends was sleeping on a mattras in the baby's room, but that didn't seem very much fun to do either. When I had made the baby buying list, I had seen co-sleepers but considered it as a nice-to-have but a bit expensive to consider it a must. A portable crib would just do fine for those couple of weeks.

When we finally arrived home with Kabouter and were trying to get ourselves arranged, it seemed that a crib next to the bed wasn't the most practical yet, as pointed out by our assisting lactation specialist/midwive as well.   In the mean time I learned in online breastfeeding fora that these 8 to 12 feedings should last 6 months if you want ensure to keep up your production for a longer time. OMG, they are nuts.  And in the hospital I was told that babies should not sleep alone in a room under 6 months for prevention of sudden infant death syndrome.  While it didn't hit me entirely yet, there were more and more indicators that Kabouter would sleep a lot longer in my room than the 1-2 weeks I had anticipated before giving birth.    However in just an hour time, my midwive had arranged & installed with Jan a co-sleeping bed in our bedroom that we could rent for a while.

It took only one first night at home to experience the value of a co-sleeper that is linked to our main bed at exactly the same height of our own matrass.

I love watching him fall asleep and listening to his breathing. It's so peaceful and comforting and it's addicting. I can comfort him with some soft strokes on his cheek as he is just an arm's length away. In the morning he starts turning and twisting and all of a sudden his big brown eyes open and when he recognizes us, we  are treated with his biggest smile.

Of course there's the flip side that any moan, sigh or crying for cramps is also just next to my ears so I've become a very light sleeper (which also enables me to feed Kabouter before any of us are truly awake and before any crying takes place) .

People often asked me how I felt and dealt with bringing Kabouter to daycare. Since I was looking for a job at that moment we could introduce daycare very gradually with a few short days a week.  That way it didn't feel too invasive at all and I was very busy with interviews that I didn't have time to think too much about this transition.   When I started working 2 months later, bringing Kabouter to daycare wasn't a new process so it wasn't painful either. Only the duration there had increased.  So I didn't shed a tear at this milestone and wasn't too emotional about it.  But when I get these questions about day care and taking some more distance and letting go, I have to think about the co-sleeping and I dread the moment that I'll not have my little sweetheart next to me anymore, as well as the end of breastfeeding. 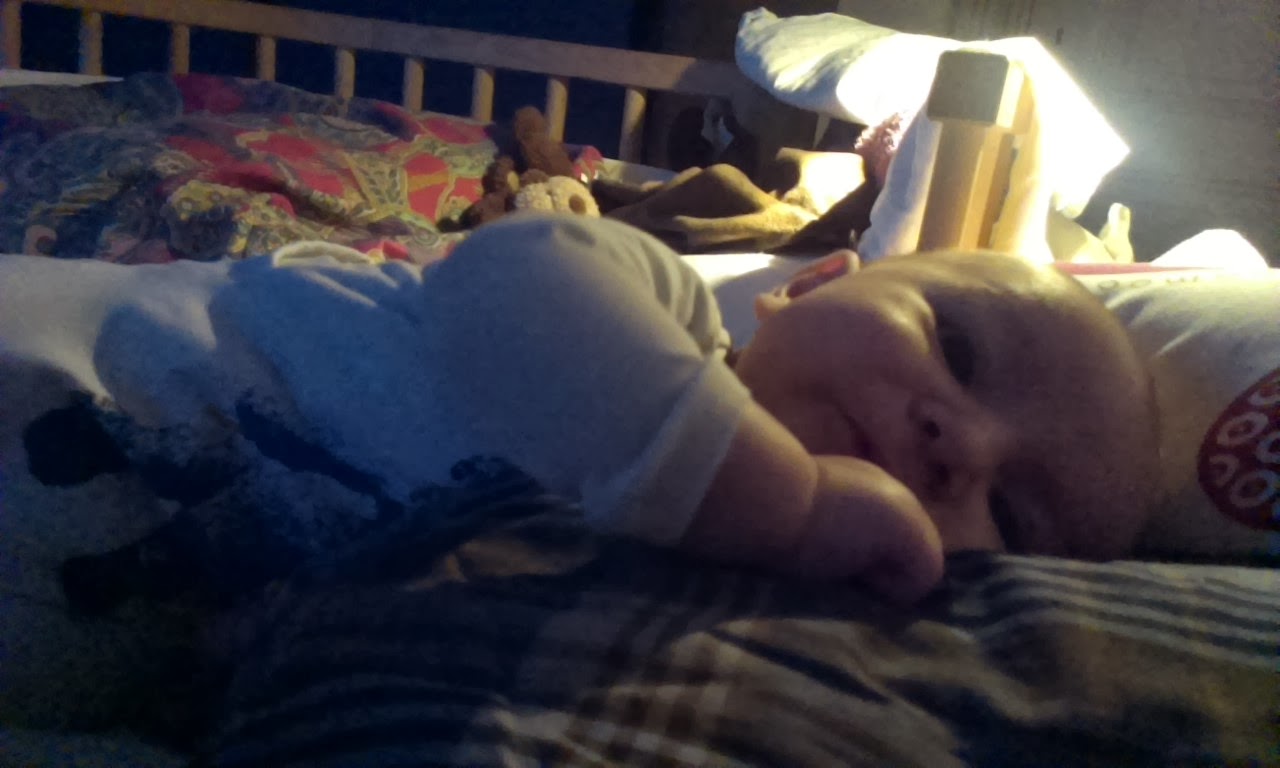 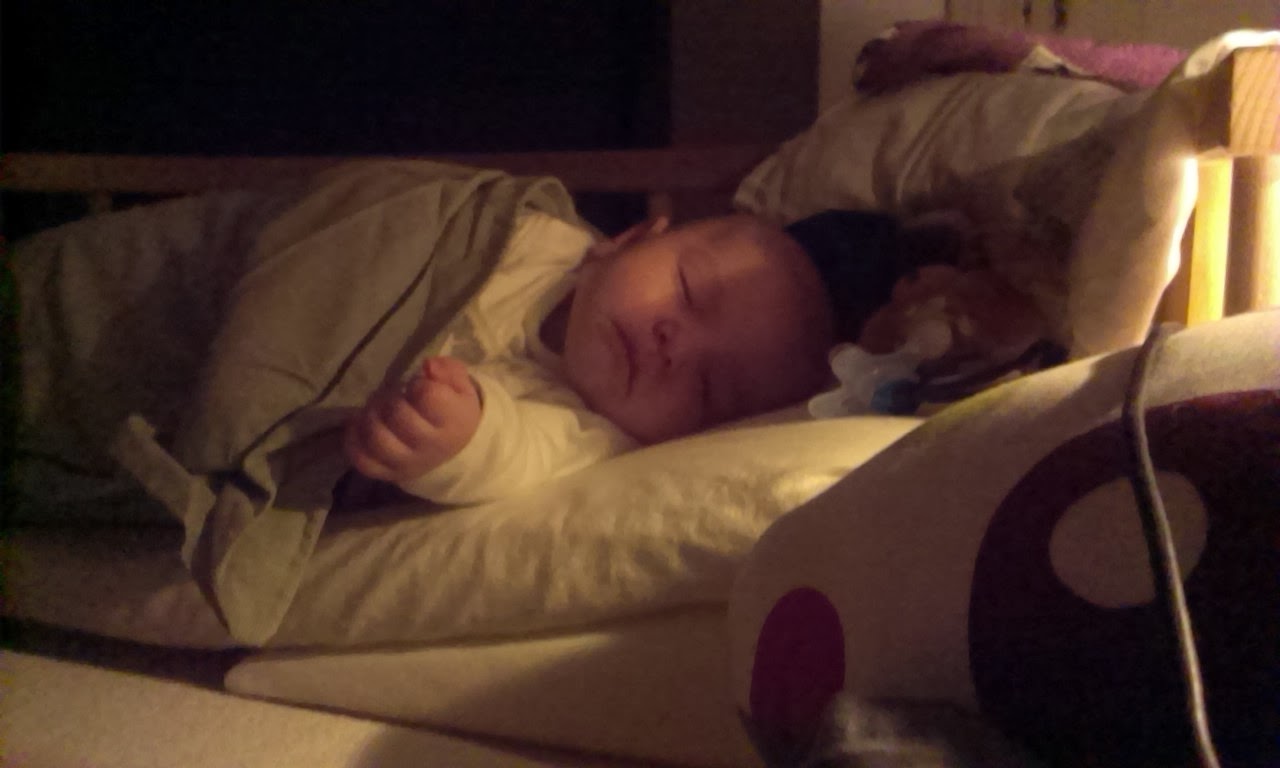 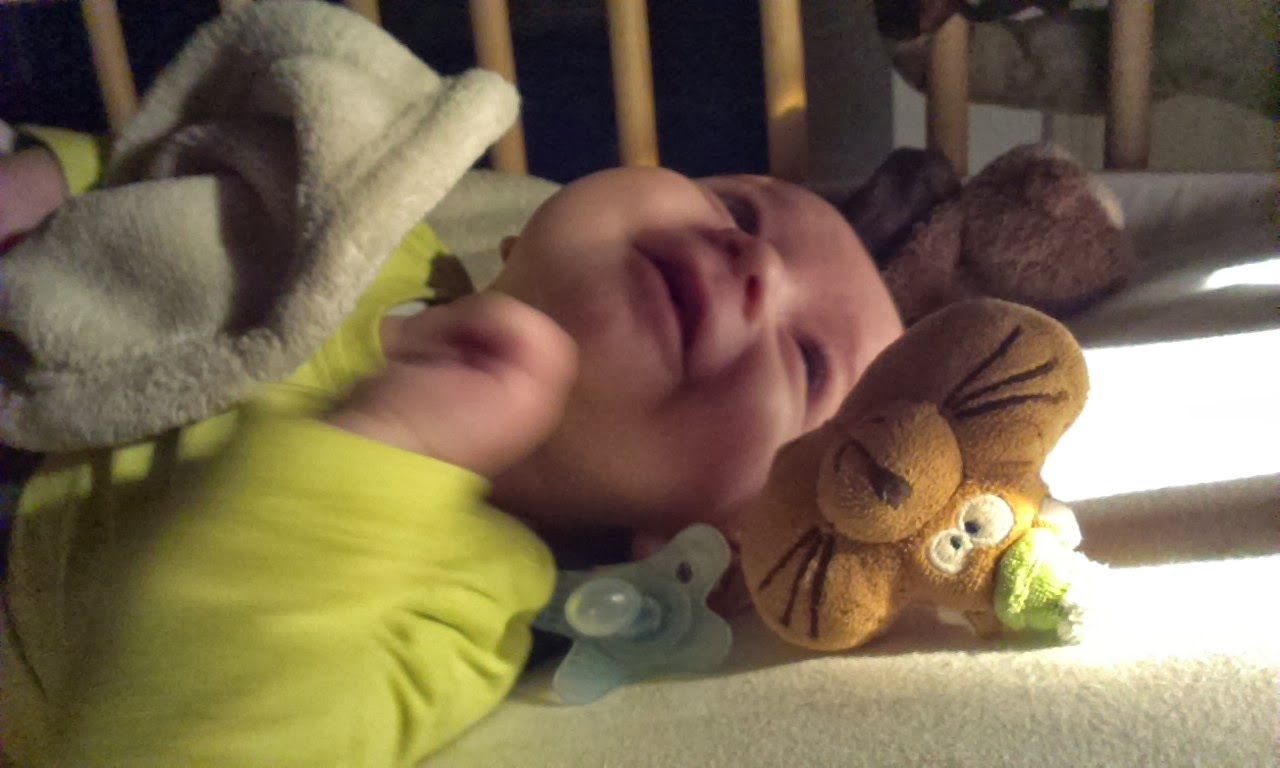 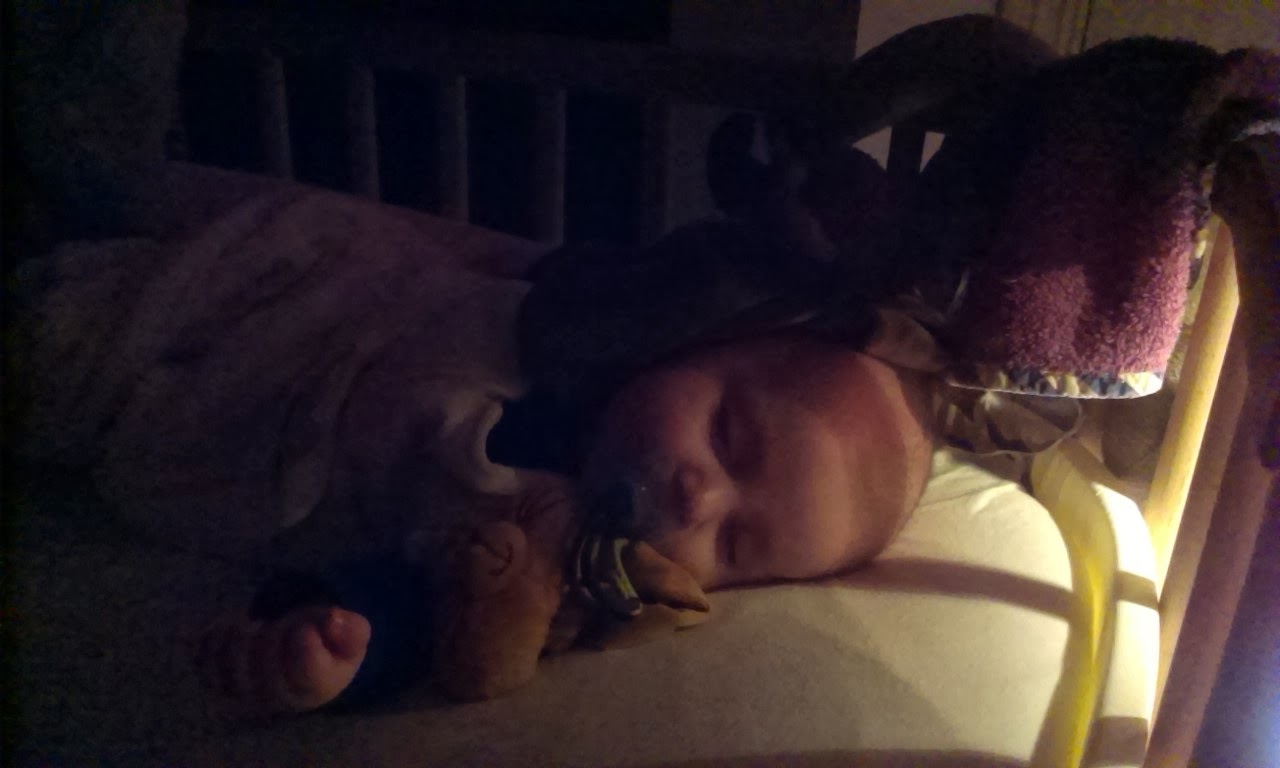 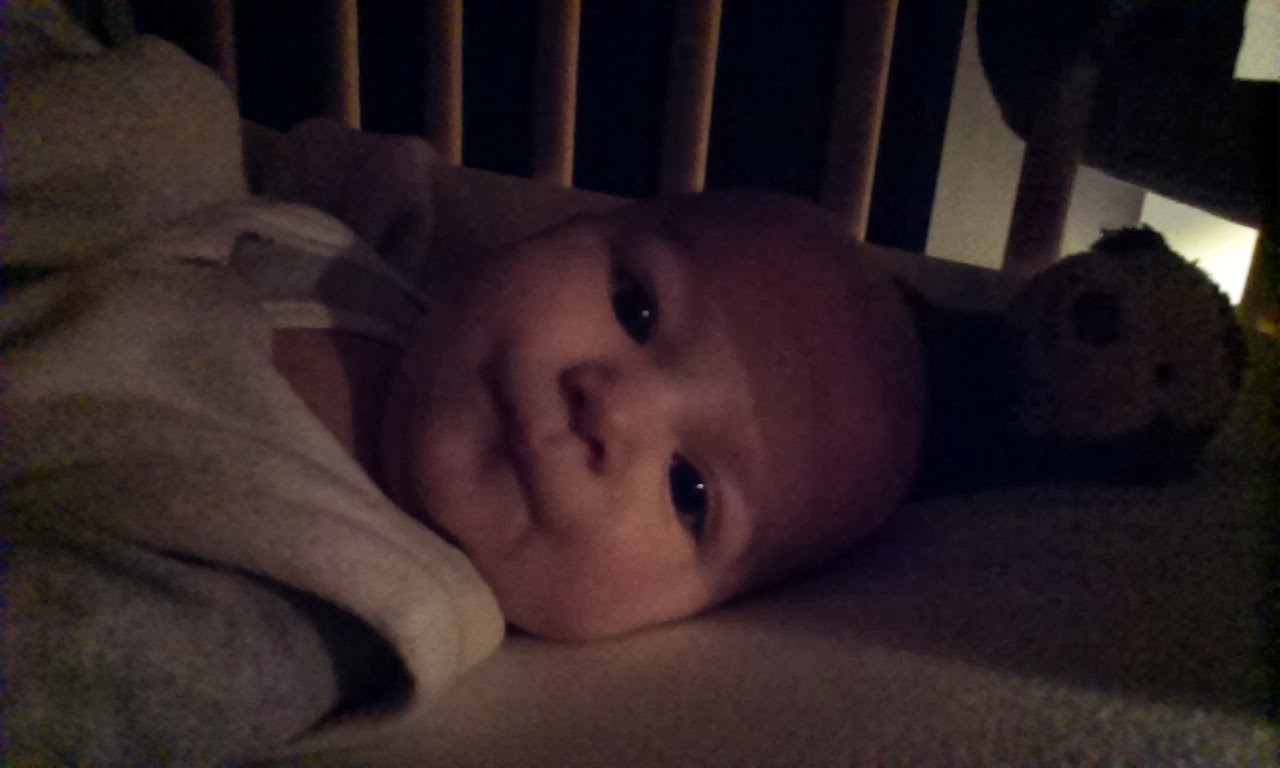 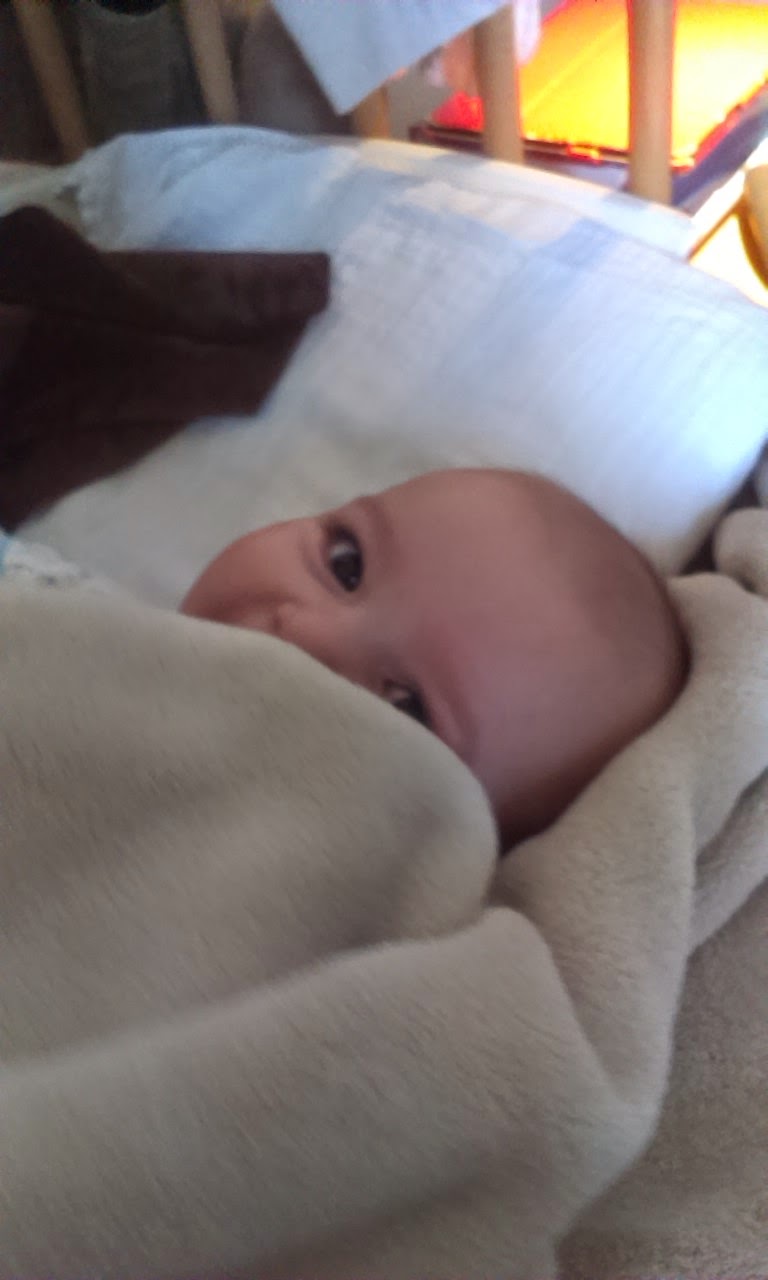 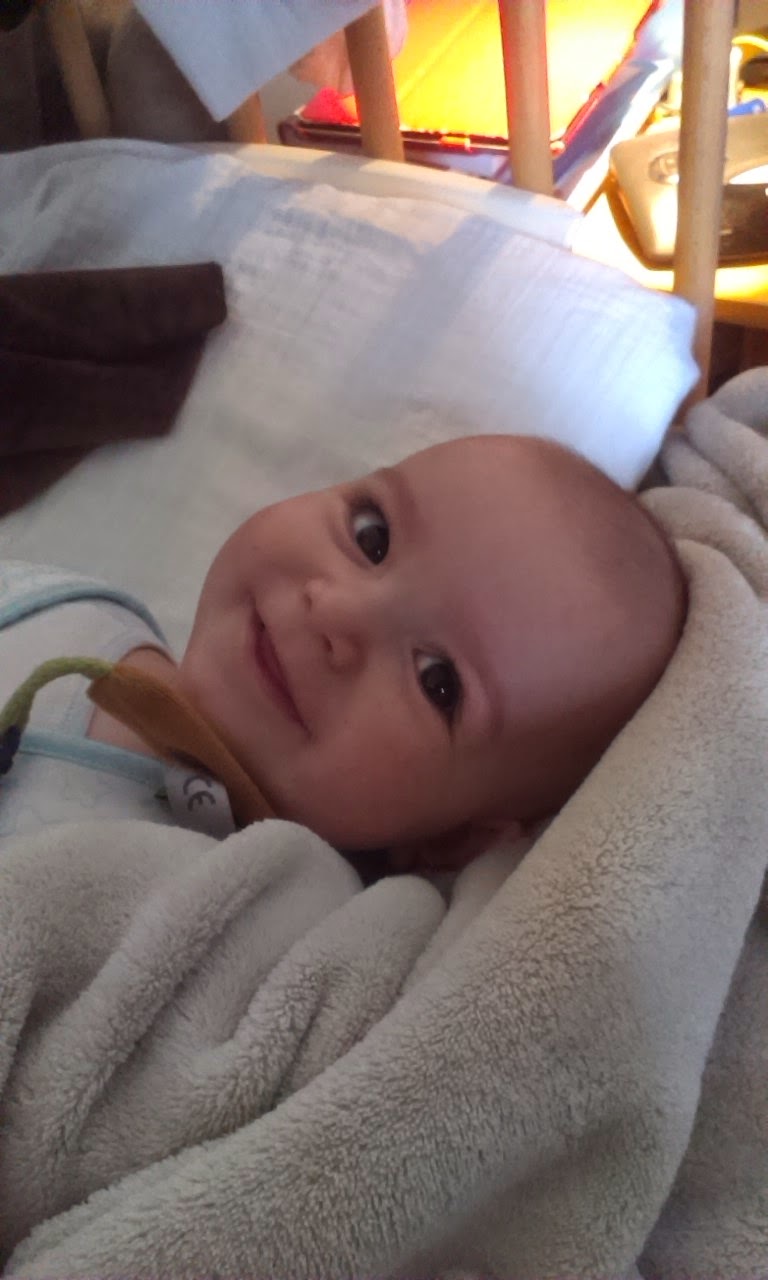 Kabouter has become very active and now stands up actively, rolls and crawls, ...:  not only during daytime but also during the night.  First we had introduced the 4th side to the co-sleeper every time he was still napping/sleeping while we were (getting) up, in order to ensure he'd not roll out into our bed and further out of there while we were absent.  But even when I was asleep next to him during the night, he started to actively pull/push me, hence waking me up and then keeping me awake as I was laying cramped in a position that would "block" his access to guard him safely within the sides of the co-sleeper. Eventually the 4th side also started to stay in between the co-sleeper and our bed during the night.    But at least he was still close and easy to sooth or feed when needed at night.

At the beginning of June he unpleasantly surprised us by standing up and leaning over the sides when he woke up in the middle of the night and watch us.  To keep him safe we had to lower his mattress to the lowest point instead of taking the "co-sleeping" principle where the crib's mattress and our's is equalized at the same side.  The co-sleeping was reduced to sleeping next to each other...which is still easier than sleeping in different rooms. But even that wasn't very optimal anymore as Kabouter was also literally growing out of the co-sleeper and had hardly the room left to twist and turn which he was doing more and more.

It became inevitable but Kabouter had to start sleeping in his own bed.  But I was not ready for that yet. Installing a new bigger bed in our room seemed not a good temporary solution either (because I somehow doubted that it would be very temporary in that case), although the idea was tempting.

In the middle of a night of yet more bumping awake, we moved him upstairs to his own room where he promptly settled for a good night sleep. The next night we tried again to have him sleep in our room but when he refused to lay down and sleep, he went up again.  And the next night he was put in his own room right away.

I felt horribly lonely and emotional. The sight of the empty co-sleeper next to me seemed so wrong and I felt the urge to see my little baby and to know how well he was sleeping.  Ironically enough Kabouter slept better and longer and didn't seem disturbed at all to spend more time in his room that he already knew from his naps.  But I was fighting tears for multiple days. My hand was on his empty little mattress. I missed him for the first time terribly during work, watching pictures of him in every break. The change to his room had somehow come unexpectedly and unplanned but seemed irreversible. I was so tempted to bring him back during Jan's travels but I rationally knew that it wouldn't work. For the first time in 18 months I was sleeping alone again: first he spent 9 months inside me, then 9 months next to me. After one week Kabouter got ill and as I worried about his high fever I put him back next to me, but it took about 2 minutes before Kabouter was standing up again, leaning over the sides and bumping and twisting   and that was the last time he was in the co-sleeper.   I tried to suck in the moment one last time when I had to bring him upstairs to his room after all so he could sleep better.  It feels like a sad goodbye. A precious time that is already gone and will not come back. I will not wake up anymore while he lays quietly with big open eyes and a smile staring at me.

We are now 2-3 weeks later and I still miss him. I never knew the sight and sound of a sleeping baby is so addictive to your own peace of mind, but it is.  I treasure the breastfeeding moments much much more now (even the remaining nightly one) and I need to hug him more often and wait a few minutes to hold him in my arms before I bring him upstairs to his bed in his own room. We also have a webcam in his room that I regularly check.

But I'm now used to it, not giving it much thought anymore when I bring him to bed. After a week, we've moved the empty co-sleeper away from next to my bed and now I am finally learning not to hop from the feet-side of the bed into my spot anymore but actually to enter/exit from the side again. I profit more from being able to bring Kabouter to bed earlier than going to bed myself and having some time left for myself. I seem to sleep deeper and longer as also Kabouter seems to sleep deeper and longer. And when being in the Ardennes where his baby bed actually is in our bedroom, I notice how easily I wake up from his noises. Gradually the advantages of not being in the same room anymore at night seem to grow over the missing feeling.

Korie said…
I love my daughter, but really want to have her in her own room at night. I don't get much sleep at night even though she sleeps a full 8 hours because every noise she makes wakes me up.
17/7/14 21:18

Brian Miller said…
smiles...ah seperation anxiety....we went through it...though i will say i was pleased...to finally get more sleep...ha....i remember the first time he slept all through the night...we woke in the morning so afraid that something had happened...lol...
18/7/14 15:27