But this year was different. This year I didn't feel very much like going to Leuven in Scène.

First of all the traditional festival date had changed: instead of the long Pentacost weekend it was now on one of the already always so busy summer weekends.  (fortunately however, Pentacost weekend gave us terrible storms in Belgium, causing a lot of damage).
Secondly we had the family planning to build the garden house that weekend...which in the end failed due to non-stop rain...ugh double frustration. Most "big" acts were on Friday evening and Saturday so beforehand I had the feeling I'd miss most of it anyway.

Thirdly it had been raining almost all week before, causing a cold depressing week. That wasn't very stimulating at all to feel like hanging out on a summer festival. And the weekend weather promised more of the same (see 'secondly'), so I was rather in the mood to crawl under a blanket with a hot tea.
Finally I knew the concept had changed and that there would be less huge acts, but more intimate scenes.

But I had guests staying over in our house who had already been out on Saturday and they triggered my curiosity. The bloggers of Leven in Leuven were also doing an excellent job of reporting on the events.  So we packed up our rain jackets on Sunday and strolled out anyway.

First we went to the furthest park at the Keizersberg abbey where ETS Dynamogène had opened their pop-up music instrument factory "Le Petit Catalogue" .   After you have "clocked in" at the factory site, you can stroll among the site where 12 actors/mucisians demonstrate their utopian music boxes while inviting us for a little dance or demonstrate a singing saw or have a drink at their little bar corner.  After hanging out for a while in this nonsense utopia world, we walked by the pop-up opera further in the park, unforatunately without performance this afternoon and we saw the pop-up library and the workshop for children to build instruments. 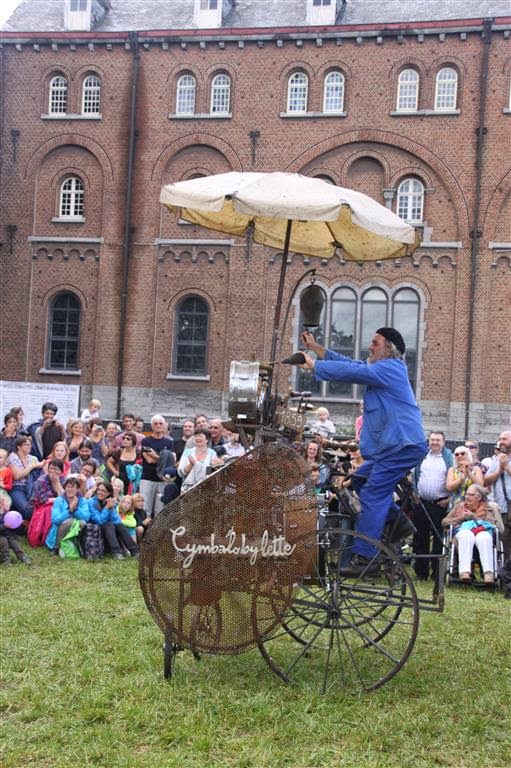 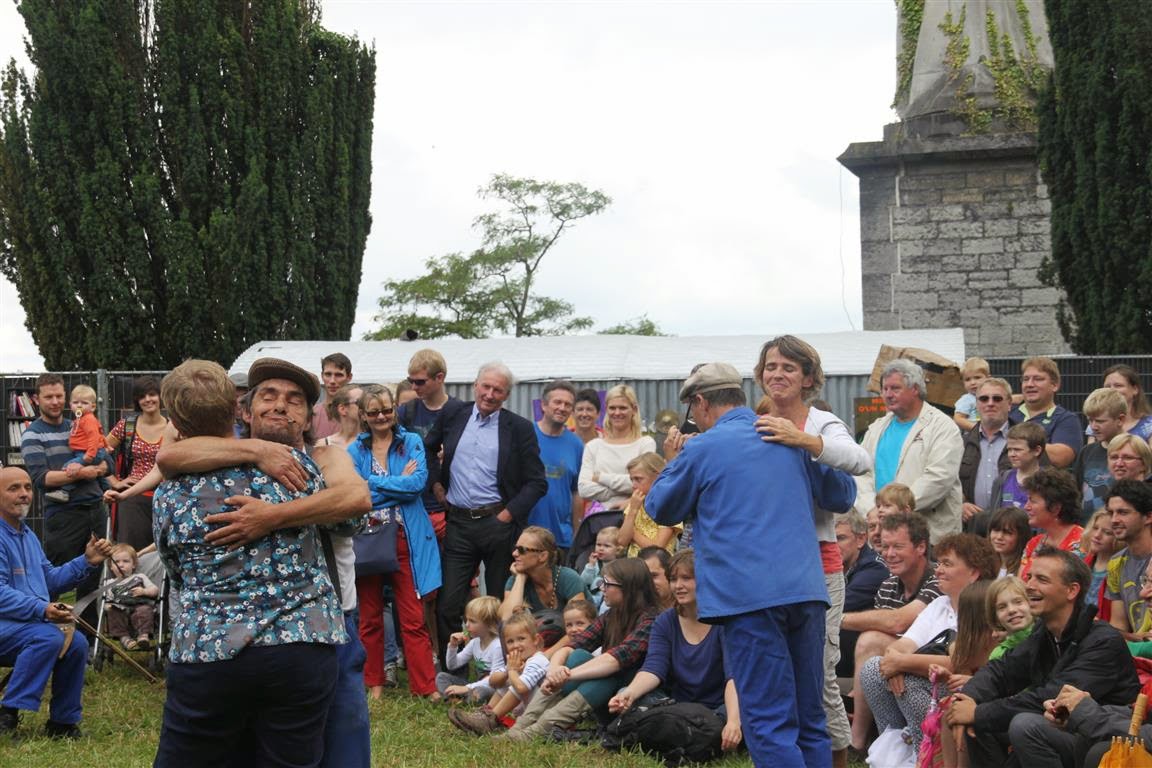 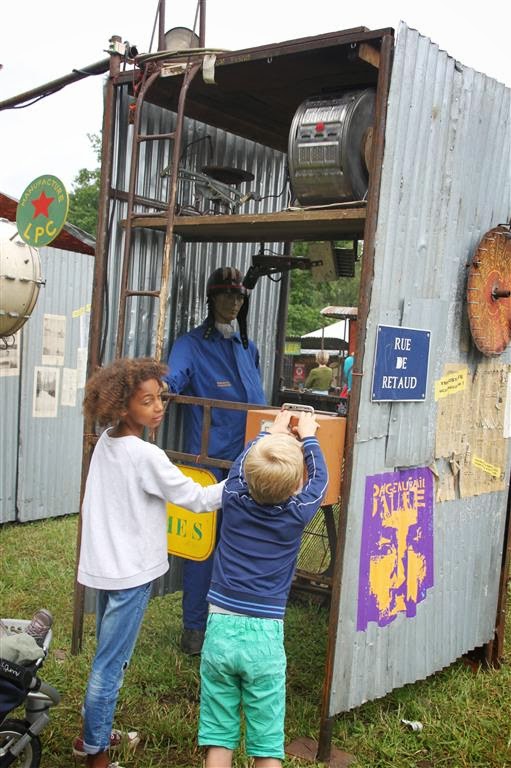 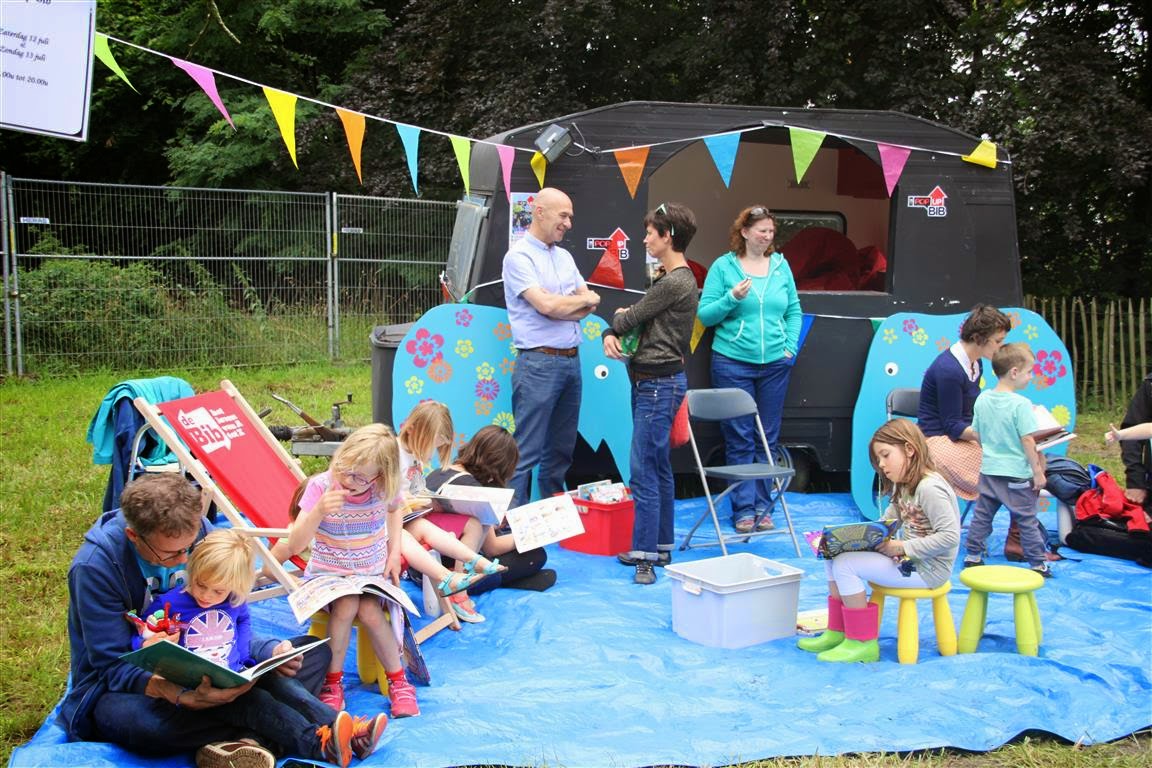 Just in time for a good shower, we hided under the trees on our way back down to the city.  In the park The Bruul we all huddled almost on each other's lap under 2 umbrella's for a short and powerfull downpour while I was feeding Kabouter on a bench.

Then we could look around and watch eg Christophe Pavia who was making the most mysterious outrageous hairstyles on eager volunteers, the circus workshops for children, Scubabianchi the curious flooded car driven by a scuba man,  etc... 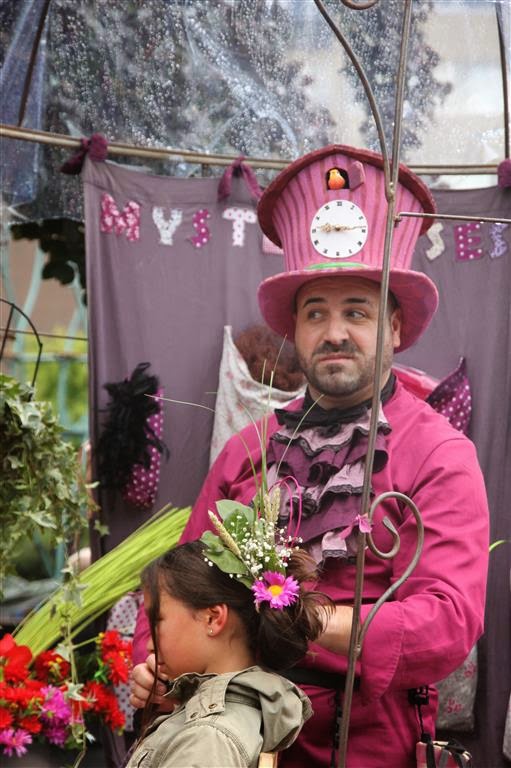 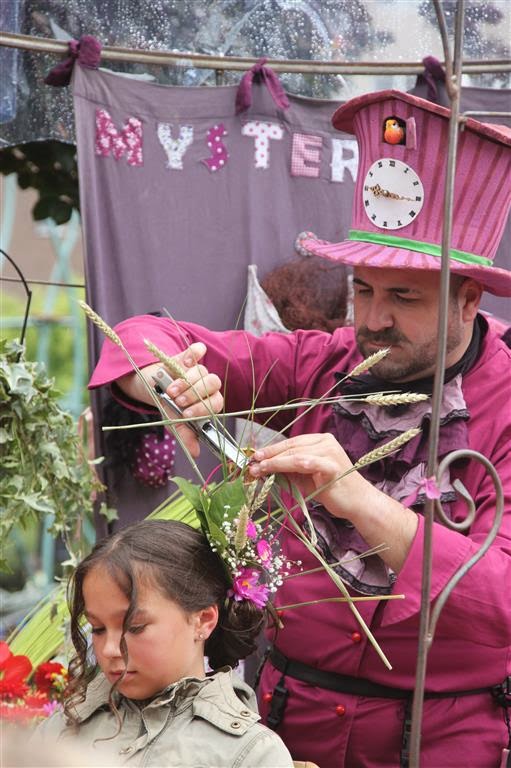 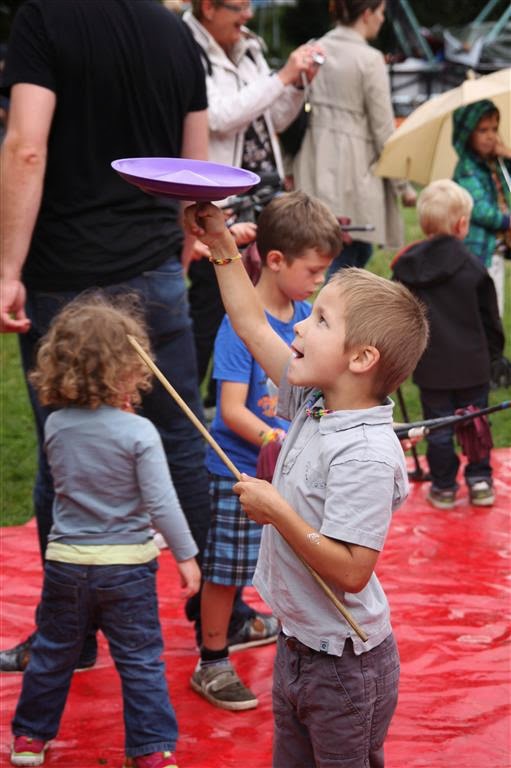 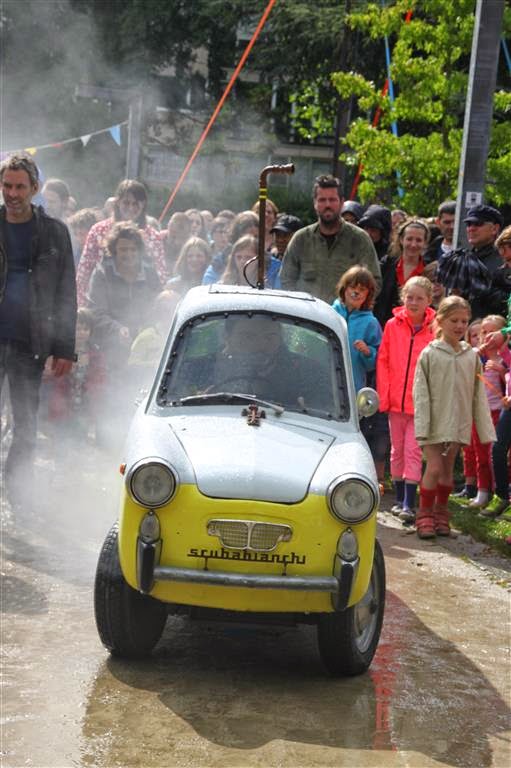 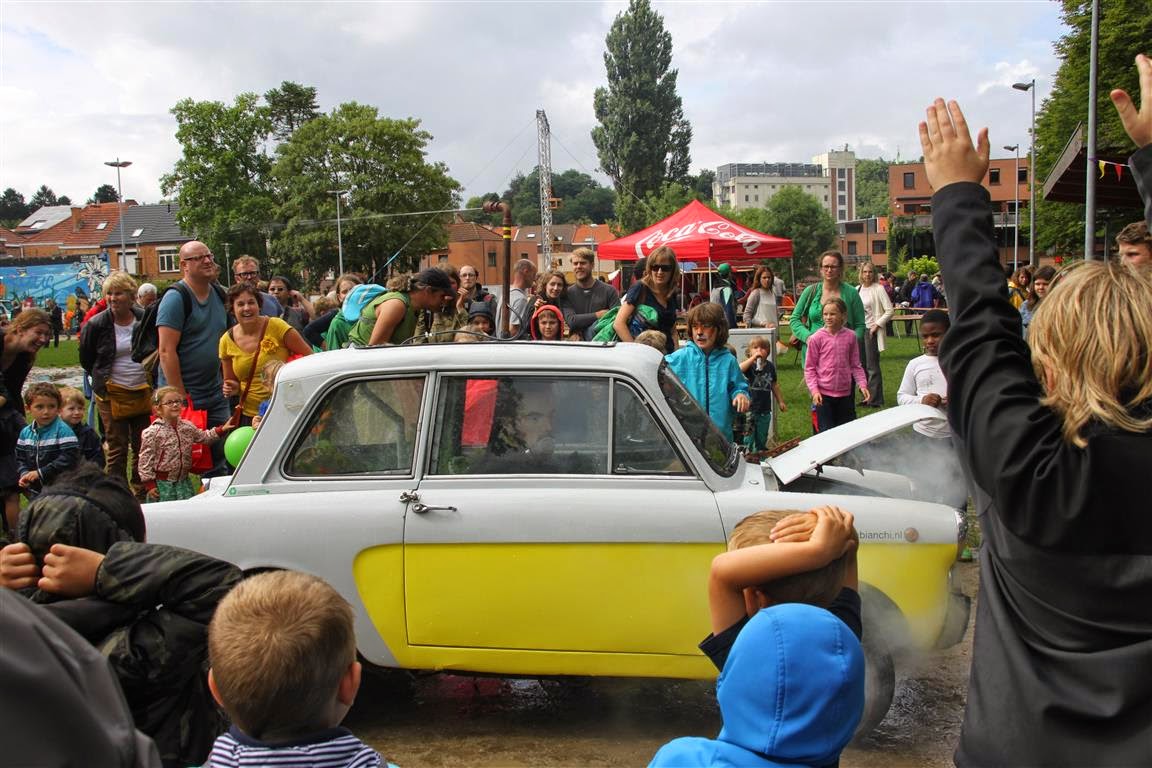 However we could not hang out too long in the Bruul as we wanted to see either Racebob or Ex Aequo ...we chose for the circus performance of Ex Aequo on a quiet bit hidden square in Leuven. Well...not so much hidden after all as quite a nice crowd had gathered beforehand to come and see the show by 2 young performers.

The young couple was moving in together for the first time and was checking where all the furniture should come and how they'd organise themselves in the house.   With just a few props you could see their arguments & fights, arrangements , reconciliations, ...and all in quite an acrobatic way.  Poetic and entertaining at the same time.   Well done for these young artists. 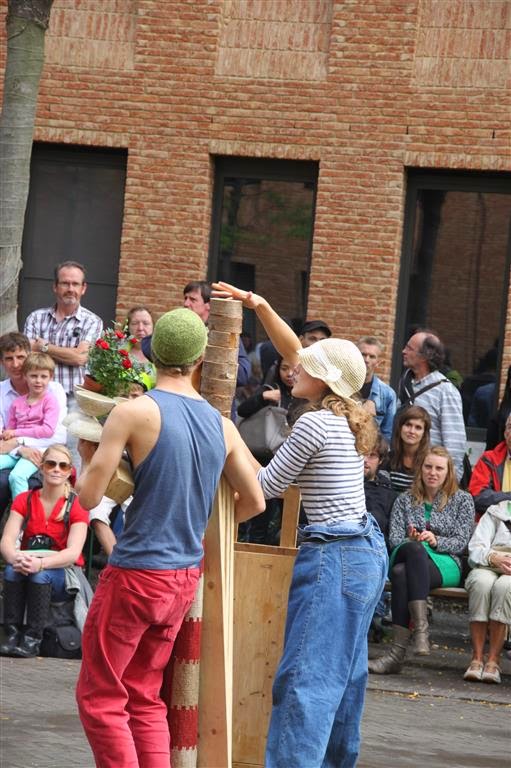 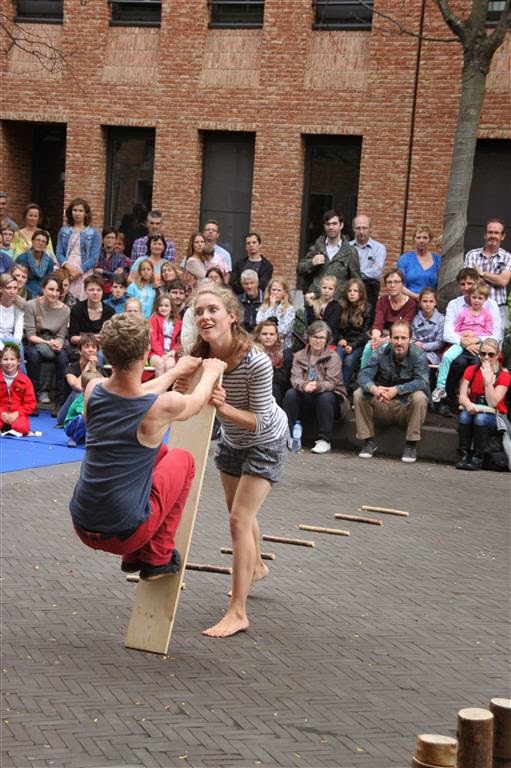 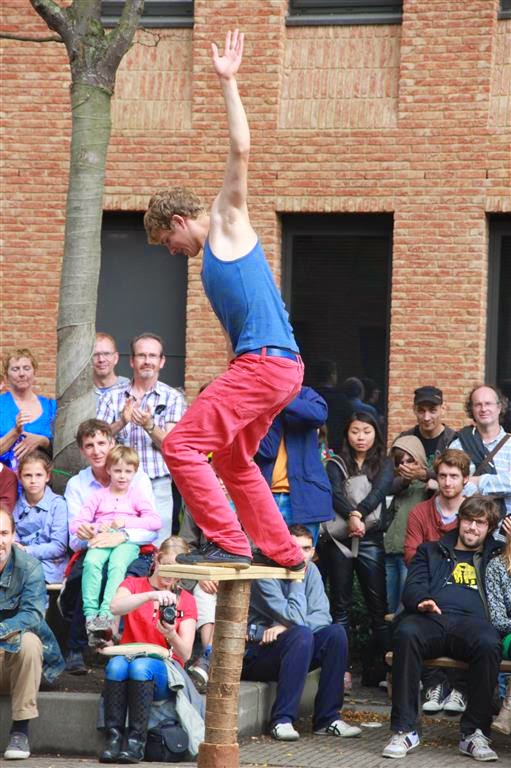 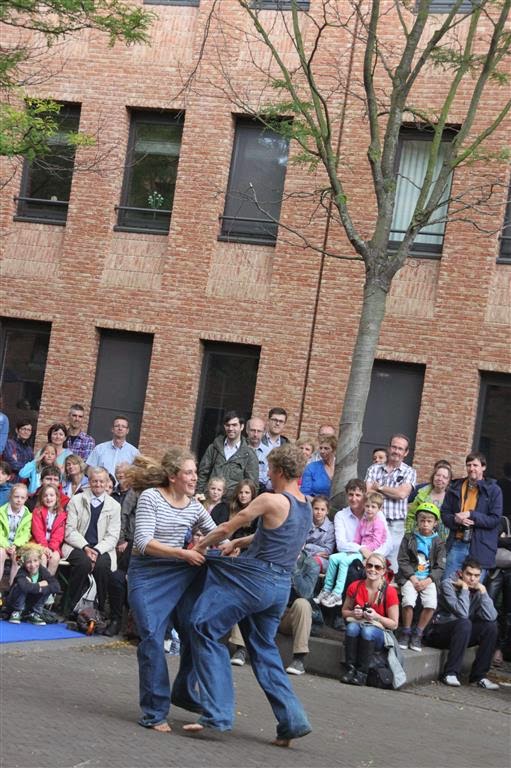 After the performance we quickly headed to the old market square to check whether by any chance Racebob's car was still racing by but there was no activity on the square anymore.   So we headed out for dinner....and were fortunately inside when for more than an hour a true downpour washed the streets clean.  So clean that we didn't see any of the small acts booked later in that evening anymore on the squares nearby.  I guess the Leuven in Scène weekend was washed out and the artist had chosen to go home as well.  In the mean time the World Cup final had started so nobody was interested in street theatre anymore and all pubs were broadcasting soccer already.

All in all it was a very fun day despite the rain and despite my mood beforehand.   I had had fun strolling around, discovering and watching artists in smaller or bigger acts.  Nothing was hugely spectacular and probably wouldn't make the national news as it had done in e.g. 2010 , but it hadn't to be.  It was a very pleasant day to be in the city, without claustrophobic crowds to discover here and there cute little things.   Cosy despite the rain.  But unlike previous years I didn't book the next date 2 years in advance in my agenda yet either.
Email Post
Labels: Fun activities Leuven