Weeks before we left on vacation, Kabouter told everyone that we'd go to the castle of Mickey.  It was clear that this was our prime goal of the trip for him and we couldn't pass Orlando without diving into the Disney craziness.
When I say craziness, I mean craziness. You can't escape. Even at breakfast in a non-Disney resort hotel the waffle looks a bit differently than at home.  Mickey and his friends are all around.  Kabouter saw Mickey's bus driving on the highway when approaching Orlando etc etc. Beforehand I had doubt a lot what to do in Orlando.  On one hand you want to see what it's all about, on the other hand I detested reading all the reviews of how busy it is, the waiting lines, the high prices, ... With mixed feelings we had bought passes for 2 days with the option to do some park hopping. 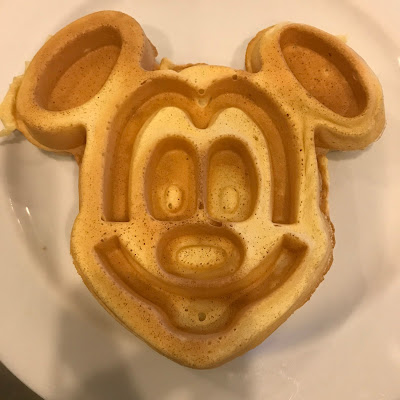 First things first, Kabouter's priority was to visit Mickey and Mickey's castle so we headed to the Magic Kingdom on our first day in Orlando.


"Megalomaniac"  and "well organised , clearly structured"  were the thoughts that crossed my mind all the time in the 45 min that it took us to drive the 10 km distance from our hotel to the park entrance along the highways amidst the Disney parks and resorts, to arrive at the 20 something parking boots that give you access to the huge parking terrains where little trams pick you up to drive you to the "transport center"  (or to walk there if you , like us with a stroller, parked on the preferred parking which is still at walking distance of the entrance), to pass all security checks and ticket booths only to then take the monorail or the ferry like us to the actual park entrance.

You can't help but feel impressed and growingly excited as you approach your goal with the famous castle in sight at the horizon.  It helps that you get to hear more and more famous Disney music at each of your stops to build up the anticipation.

Together with dozens of people, entire groups and families all dressed in colorful T-shirts "Disney summer 2017"  "family vacation 2017"  "I'm her Mickey - I'm his Minnie",   women in red polkadot Minnie dresses and adults with "Mouse ears"...we arrived in the park, clearly a bit under-dressed for the occasion :D. We love to be rationally boring. Haha, actually we had dressed Kabouter rebelliously with his new Cookie Monster hat. I loved that detail when I saw everyone else dressed in "Mickey" theme.

Conform to the dozens of other people in front of us, next to us, behind us, we posed for multiple selfie's in front of the castle. 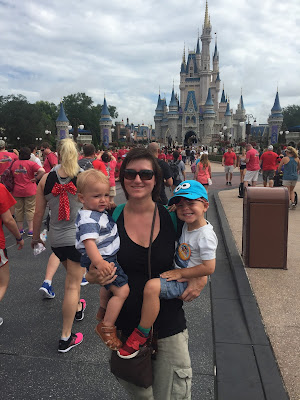 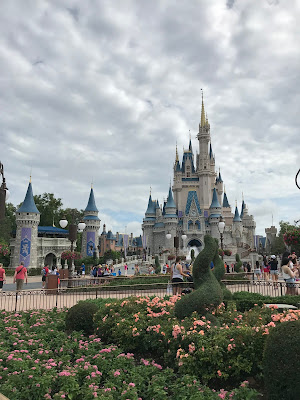 We choice the flex passes for "It's a small world", "Jungle Cruise" and "Pirates of the Carribean". We also managed to get into the "Under the sea" Ariel mermaid ride with less than 15 minutes waiting time and rode on the PeopleMover in Tomorrowland.

Together with Kabouter I went on the river boat where Jan was refused with a sleeping Beertje in the stroller. While it is wheelchair accessible, a stroller with child was refused in the most child-unfriendly way. Jan wasn't even allowed to wait for us in the shade at the entrance with Beertje. Shame on you Disney. I can understand that a lot/most attractions don't have the option to load a stroller (hence the filled stroller parkings outside each attraction) but this steam boat can do so in a safe and easy way!

When we  walked by the Pirates of the Carribean before our time slot, we heard the announcement that the attraction had to be closed down due to a technical issue.  Even though there was no height or age restriction on that attraction, it promised to be "thrilling" and Kabouter had already proven not to be a  huge fan of rides that pass in the dark or show monsters or witches or so. For that reason I was relieved to not to have to go on the Pirates of the Carribean anymore with him. The good system of flex passes released our reservation immediately from our entry cards and  allowed us to go anywhere we wanted at any moment to replace the lost reservation.  Good system! Instead we chose a Winnie The Pooh ride at the end of the day which was a success for both children.

While visiting the Tomorrowland section of the park, the rain clouds moved in again but the gentle rain was very refreshing. We hide a bit in the theatre "Carrousel of Progress".


By 3 PM we had done all of our options for little children without extra waiting time but one thing was still missing big time for Kabouter:  where was Mickey? When was he going to meet Mickey?!? Were we finally going to see Mickey in his castle?

We lined up nearby a covered passage way to wait for the Festival of Fantasy Parade, which was postponed until further notice due to the threatening thunder storm clouds. I wonder how often they need to delay the parade for that reason in the summer?
Since the weather apps were promising, we waited patiently in the rain for the clouds to move on and for the parade to start so Kabouter could see his friend.  The waiting was quite difficult for a protesting Beertje.  45 minutes later Kabouter's patience was rewarded: all  Disney heroes came by right in front of us : the princesses from Frozen, from Belle, Ariel once again, the pirates, ... and at the end: MICKEY! Finally we had proof that Mickey was around. He even waved at us and Kabouter got a high five from Donald Duck. After that we were all ready to leave. 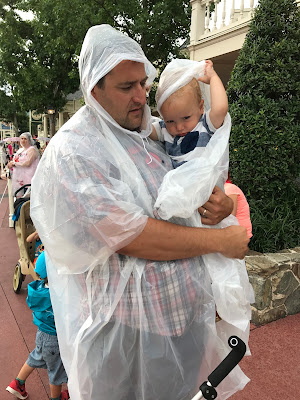 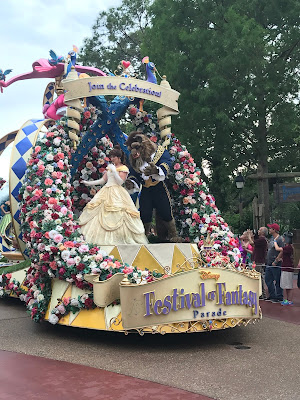 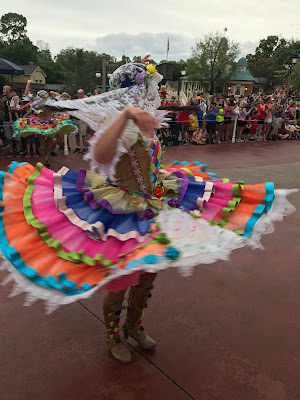 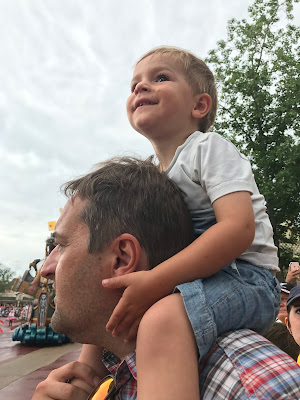 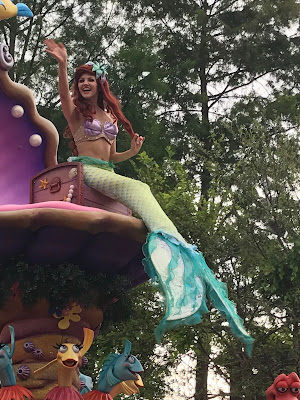 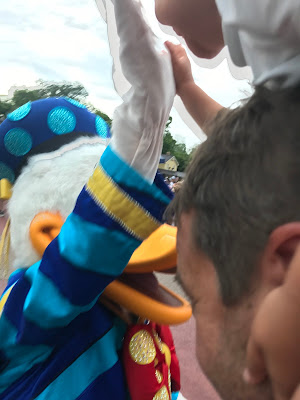 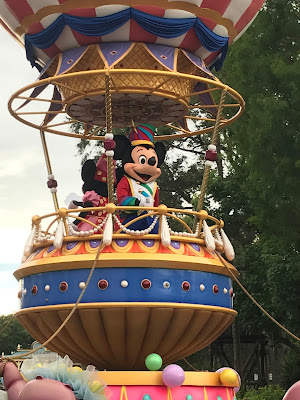