Goodbye from Kindergarten - no longer a pre-schooler

Kabouter has left the kindergarten and will start elementary school in a few weeks.

I tend to not realise milestones beforehand until we've reached the milestone.  I usually don't make a big fuss of things because I don't like making a fuss in most cases but also because I don't realise in time that the reasons to make a fuss is coming up.

In this case, I knew that there were only 2 weeks of school left after we returned from our vacation.  And I knew that Kabouter would finish his last year of kindergarten.  Obviously I knew that. But I was sort of busy getting over jetlag and get back in the working routine. When we got an invitation for a goodbye reception at 4 PM, I spontaneously reacted that I wouldn't be able to attend because I was working without too much thought.  Until I mentioned that to a colleague who said very firmly "you must be there, you must go".

And then I realised it that my oldest son is going to elementary school. I no longer have a pre-schooler  (stupid word...he's been in school for 3,5 years already).  In a few months he starts reading and writing and doing math and in his class there will be school desks.  I knew that, but I only really realised it at the end of the past week! Sometime information you know, only hits you and sinks in much later.  OMG. Kabouter was leaving kindergarten! So I cancelled some meetings and I left the office early for the goodbye reception.

Waving off and reception #1

The children walked in hand-in-hand with the students from grade 6 that also celebrated a goodbye, and we could literally wave them off.  There were some speeches and gifts. Then the children performed a little modern dance which they did really well. They all received a medal from their future teacher in grade 1 and a painted picture frame with all their class mates as a souvenir.

Then grade 6 did it all over again after which it was time for a reception.  Pheww we were all melting in the sun on the playground where the thermometer displayed 35C. 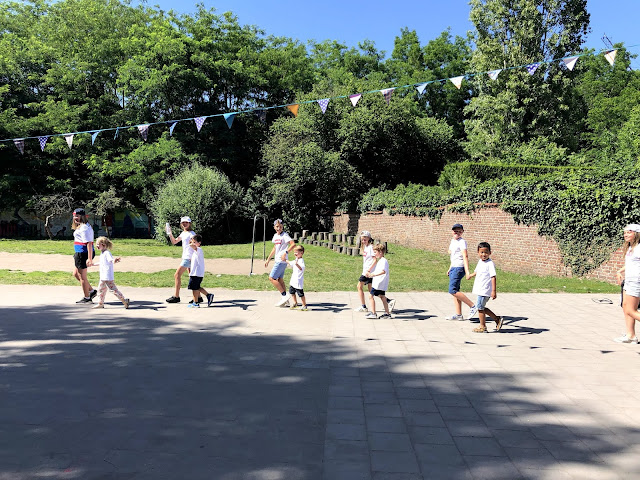 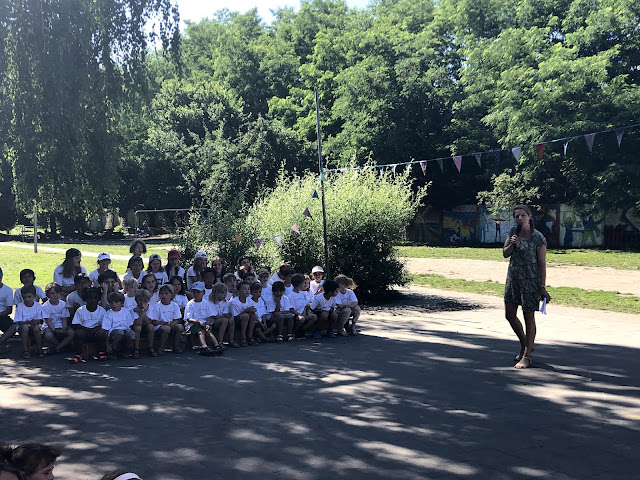 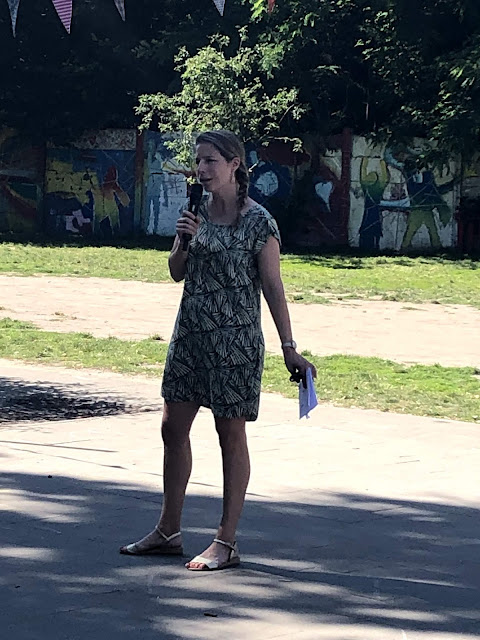 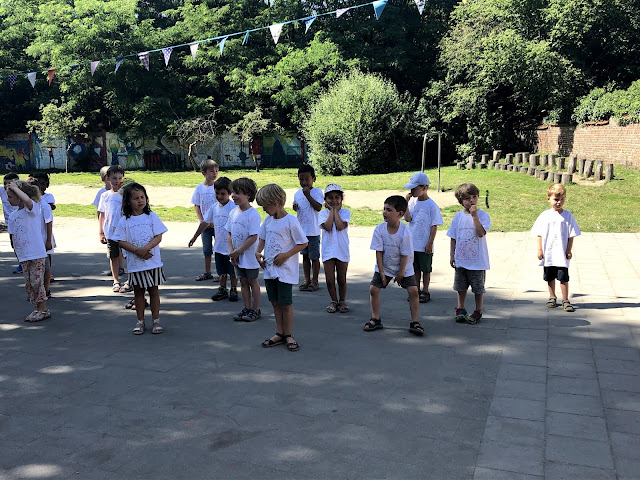 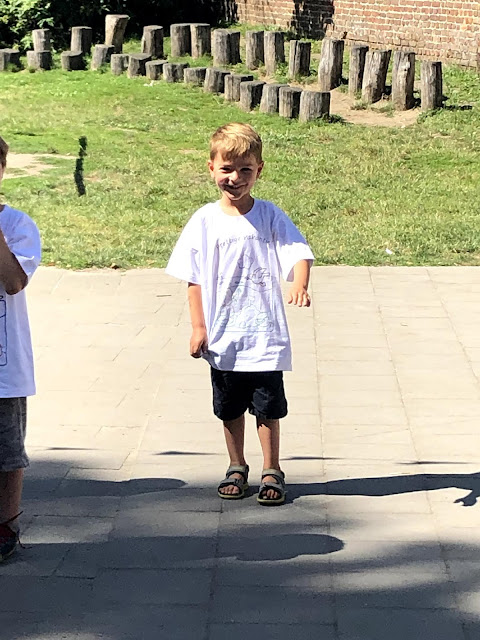 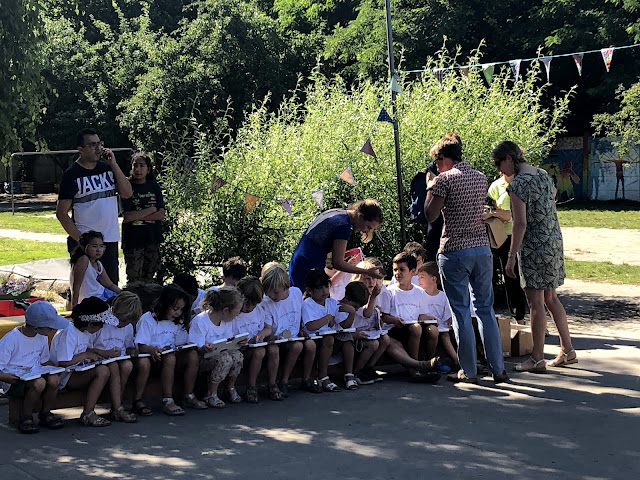 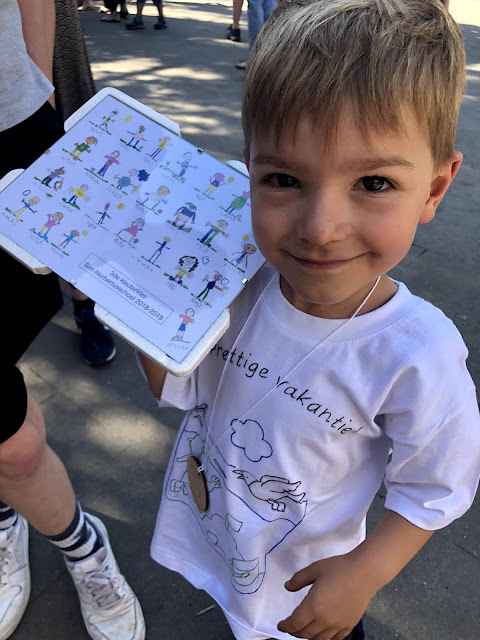 I was so proud of my oldest boy.  We had a good time socializing with the other parents with a couple of drinks.

And then more people arrived as there was a second party scheduled later on: the goodbye of the school principle who was retiring and all parents and children were invited.  There was another speech, there was some music and we all sang a song for the principle.   And then we had a few more drinks and snacks in the heat while the children were playing all over the place. 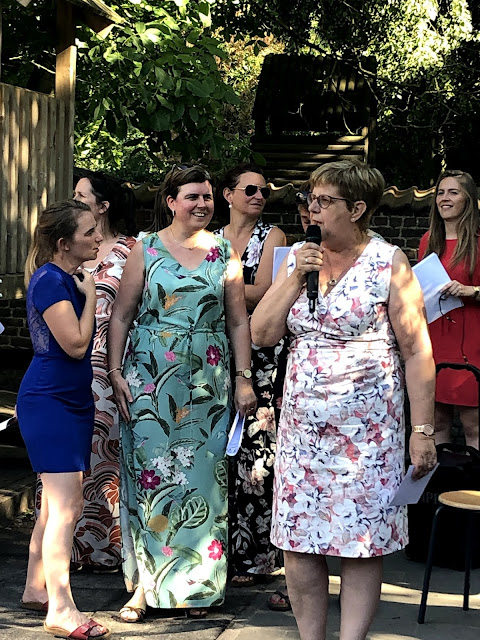 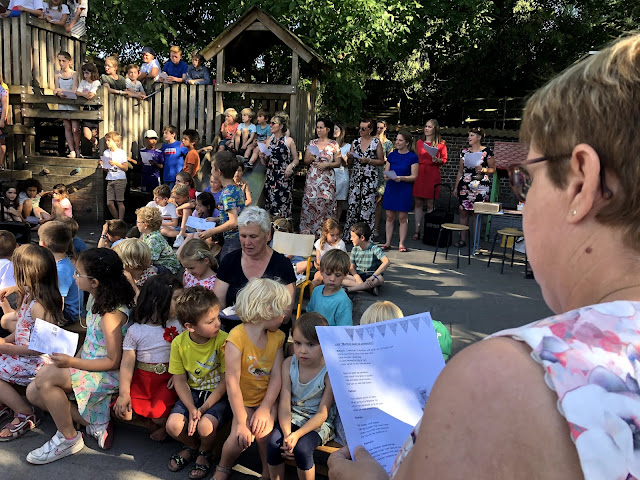 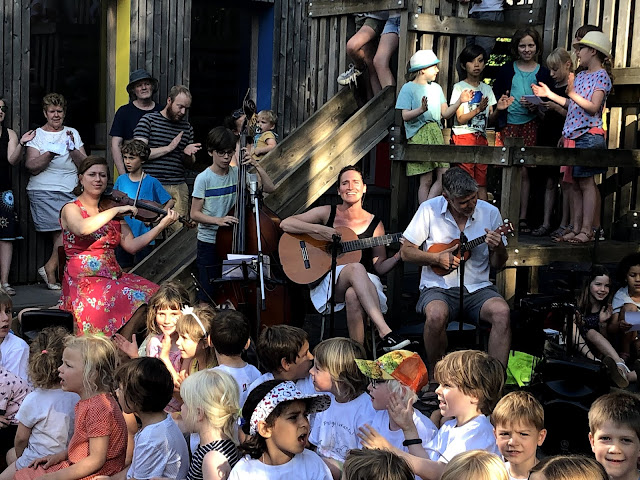 Looking back and forward with gratitude
I felt very grateful that the children are both in a school that they seem to love and that we love.  It has a small cosy size, it has lots of outdoor garden space that is constantly used and it has an fun down to earth atmosphere with attention to the children and their wellbeing and without exuberant fuss. We walked home satisfied with 2 tired and sweaty and dusty pre-schoolers.  We'll return in 9 weeks with 1 pre-schooler and 1 grade 1er.
Email Post
Labels: Kabouter