On our last day in Canmore we headed to highway 40 which runs north south into the Rocky Mountains.  It's not part of a National Park and hence less traveled by international tourists but it boasts all the beauty of the Rockies.

The valley is a higher narrower side valley, carved by a higher glacier that carved the bow valley of Canmore and Banff National Park. 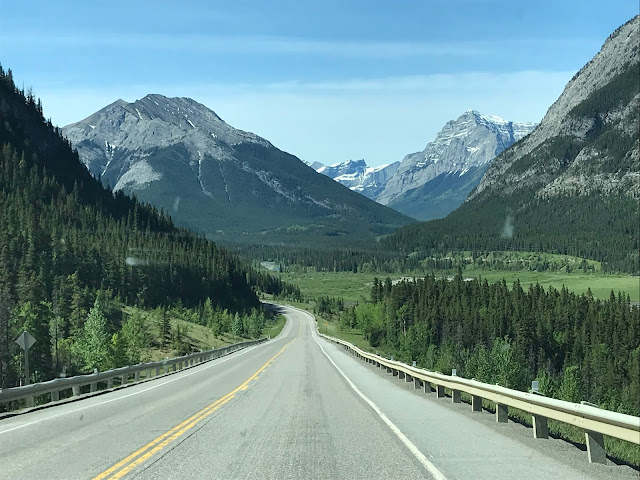 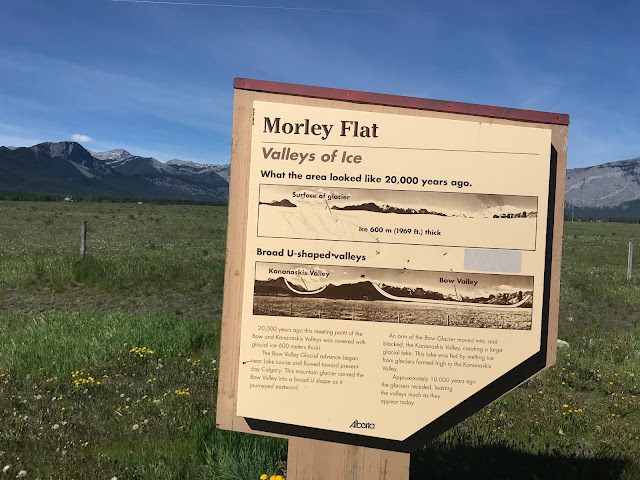 We first stopped at the base of Nakiska ski area where is the trail head of the Troll Falls hike. Equipped with our bear bell and bear spray, we took the easy walk through pine forest and aspen woods which gave us nice shade on the hot day.   We spooked some deer and chipmunks and other small wildlife. At the end we were rewarded with the Troll Falls. 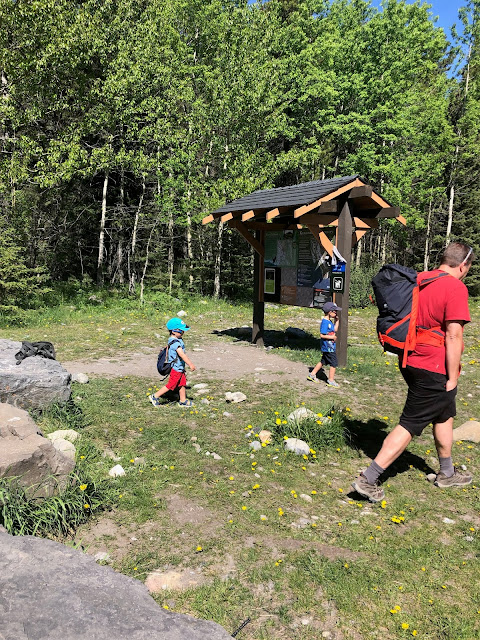 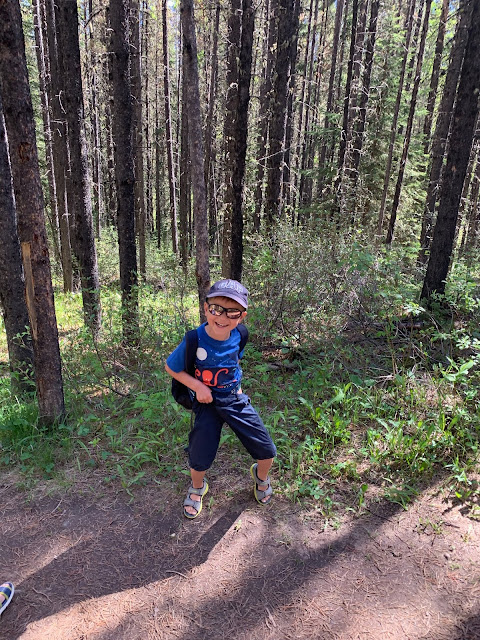 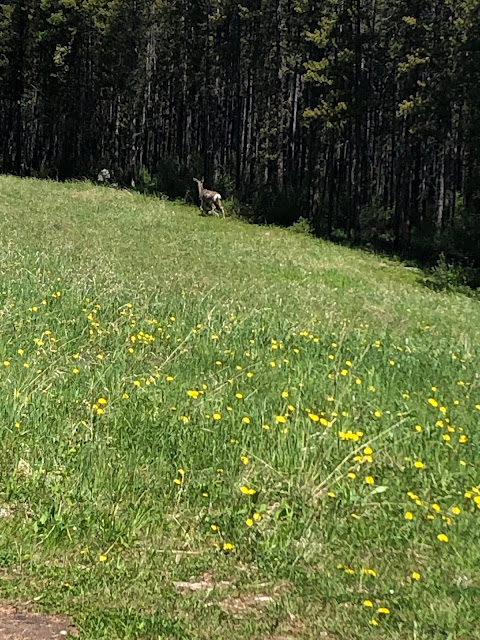 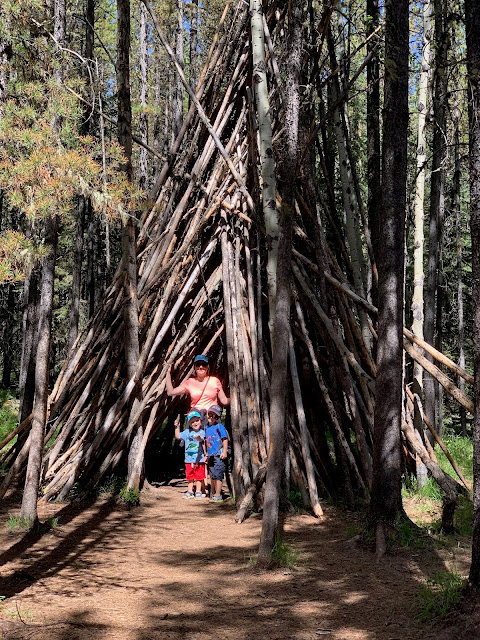 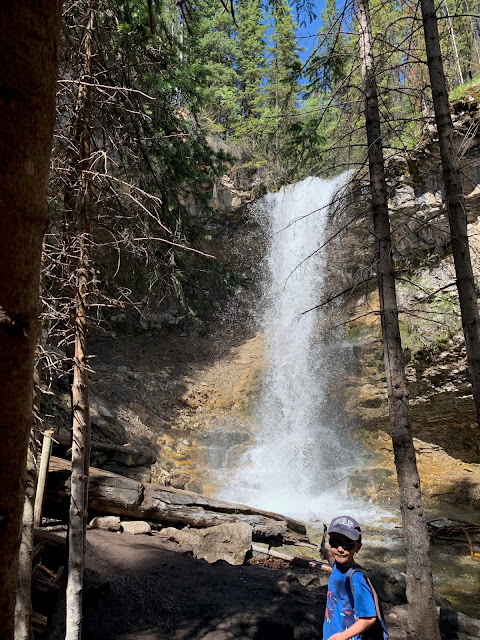 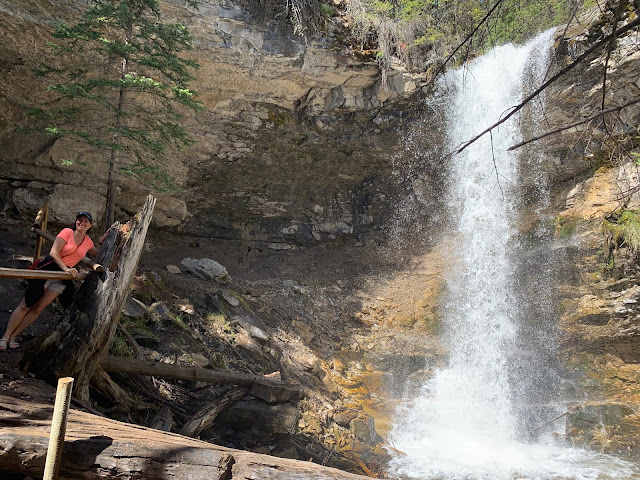 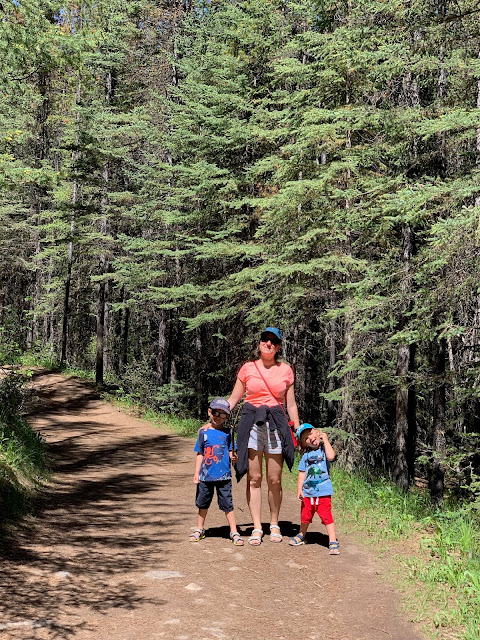 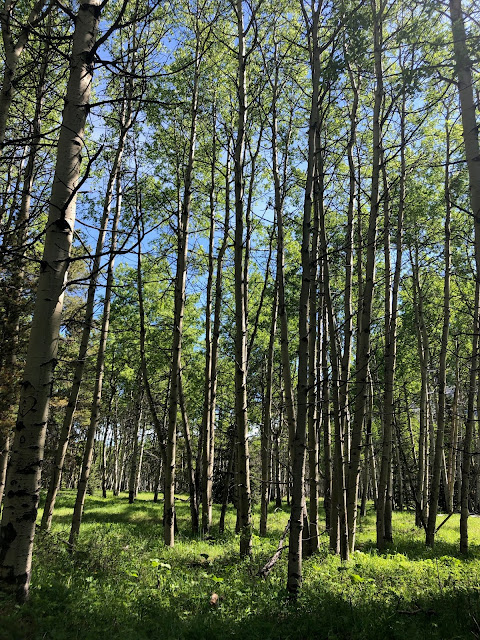 At noon we stopped a little further in Kananaski Village. Where I had expected a fully equipped little tourist mountain village, it turns out this is just a big parking lot with 3 hotels/lodge/conference centers with a little store grouped around a plaza on a plateau looking out further on the valley. Not quite the "community" I had expected, but good enough to have some lunch on the plaza in the middle of the resorts and easy to use the many facilities around us.

After lunch we took a little walk on the village rim trail which is a nice pathway along the edge of the plateau with access to several viewpoints and truly magnificent vista's on the surrounding valley and mountain ranges. Absolutely fabulous and very accessible and easy to do.  There was only one thing: were walking by each 100 meters warning signs that there was a bear in the area and we had read online about recent viewings in the previous days right close to the village buildings.  We had just had a bear encounter the days before so we knew very well that these are no idle warnings and this fluffly mamal was surely just around the corner and must have spotted us.  So even in this "village" , we walked with the bear sprey, children close at hand and when they tried out the playground for a while, I kept tingling the little bear bell and talking while I scanned the trees around us.  But we've been noisy enough to keep her/him/them away. 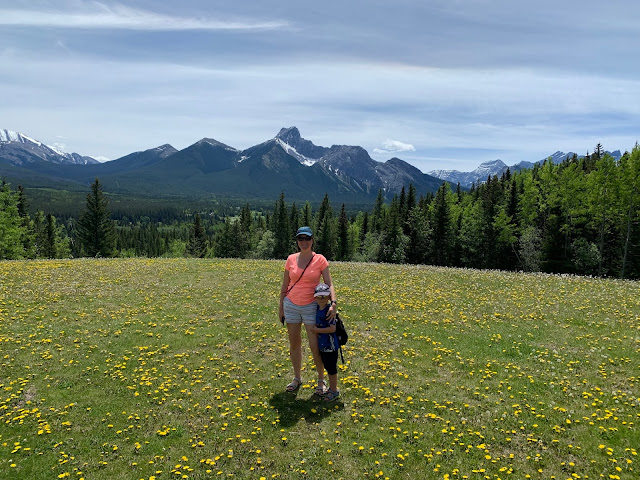 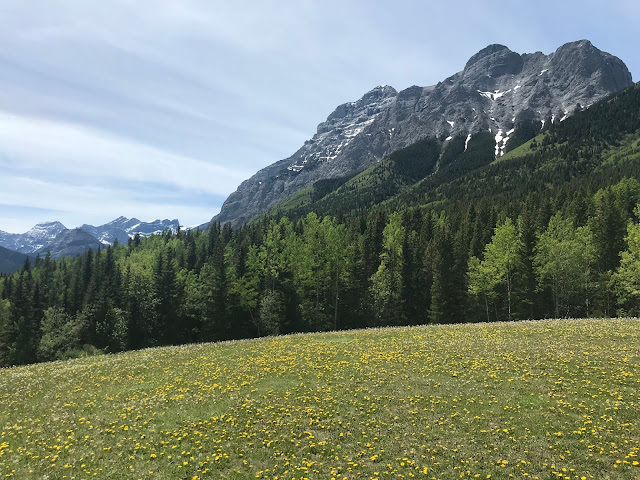 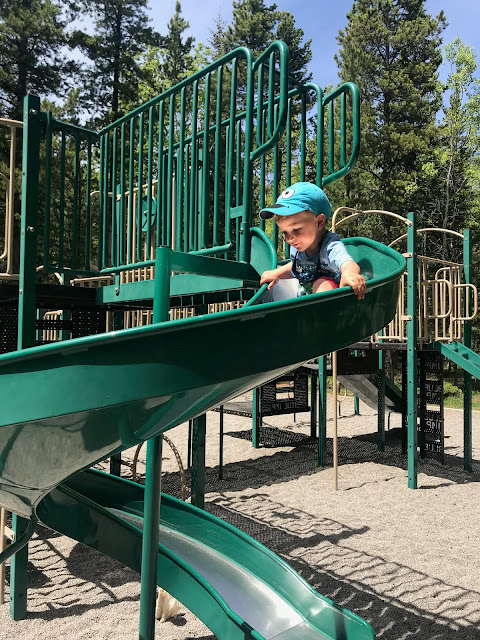 After that we continued highway 40 up to the closure point where it turns into a gravel road with a mountain pass that only opens up after June 15th.  When we were on the Cowboy Trail on highway 22 driving up to Canmore, Jan had hoped we could have taken this gravel "shortcut" right across the peaks as my host family had recommended but that had not been possible.

The further we drove, the less passing traffic which resulted in 3 more bear viewings from the car. First a black bear crossed and further more we saw park rangers stopped ...and sure enough they were hassling 2 grizzlies closeby the highway further down into the woods.  Thanks to the rangers we have no pictures of them but we did get a glimpse to see their presence.

At the highway closure, all of a sudden it got really busy because a lot of bikers parked there and profited from the closed highway to get a biketrip in the backcountry on the highway.  Must be cool! 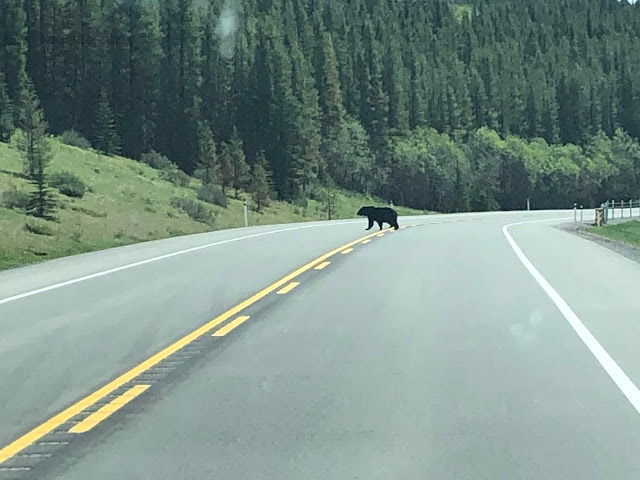 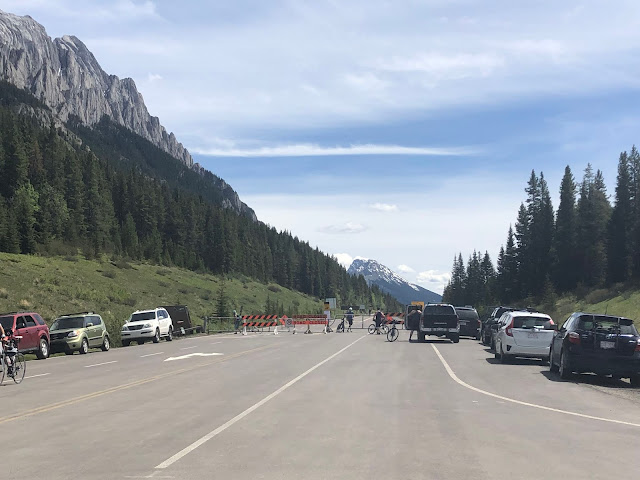 We turned off to go and see the park's facilities of Peter Loughleed Provincial Park and also the connecting gravel road to Grassi Roads at Canmore (that we had started in the evening but never riden).

Then we turned around and returned on highway 40 from where we came to our hotel and enjoyed once again the beauty of this valley...and the abundance of mountain bighorn sheep that all of a sudden blocked our road and couldn't quite decide whether they'd move to the left...or right, ...or no, let's go to the left again...or should we move to the right? In the mean time we waited for them to move over and impersonated a bit more our friend "Harry, the confused stupid bighorn" with silly voices. 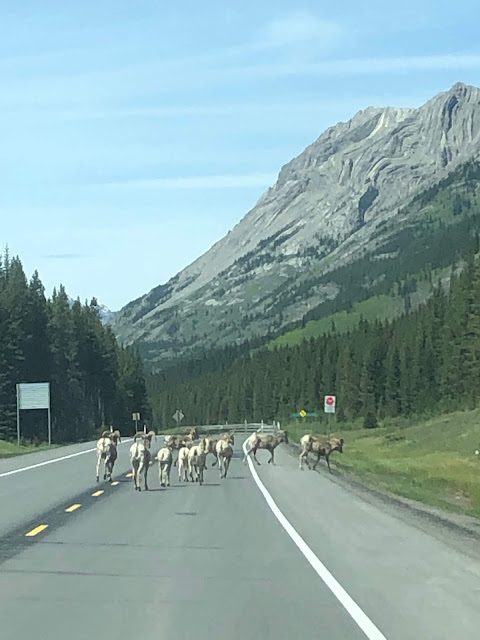 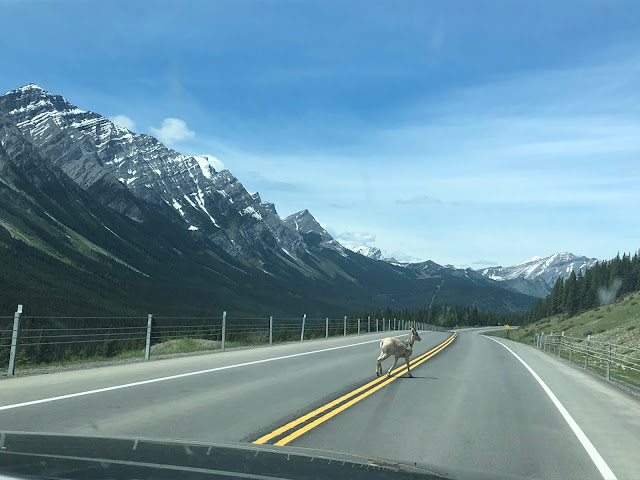 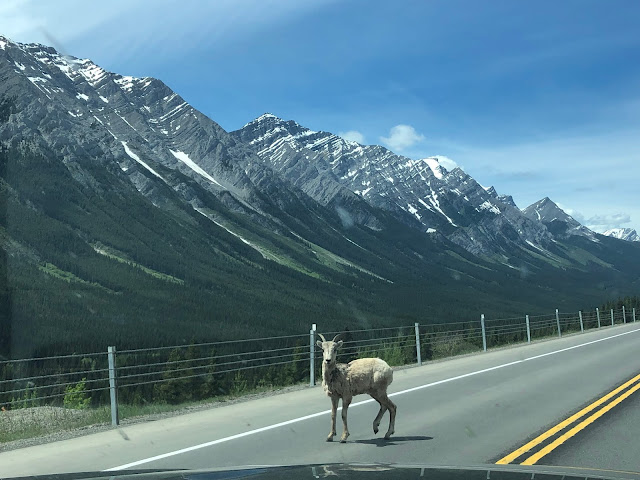 And then we returned to our hotel for our last evening in Canmore, some more swimming in the outdoor pool of our hotel and finish our laundry  (never been on a vacation where I return with only clean clothes in the suitcases).

The next day we left our beloved Canadian (Rocky) Mountains and lakes behind with sad sad hearts and drove back to Calgary.  Before we had to go to the plane we had time for one more visit in Calgary which was described already in this post.