Our transatlantic roadtrip with 2 small children: in the air and on the road

We often get surprised reactions that we travel transatlantic with our children. Well, people that know us well are not surprised as it has become a little bit of a habit in the previous years.  For Kabouter this was the 5th vacation in North-America and for Beertje the 3rd.

So in all honesty I didn't feel very stressed about the travel aspect for our vacation anymore. Both children seemed to be well aware of what it meant and seemed to look forward to spending many hours in the plane.

Just as I described in 2017, we put a lot of effort in searching good affordable flights but also good combinations that we consider child-friendly. Finding a good flight is in fact the decision point to go or not go on a particular vacation.

If there are no direct flights (as is the case to Western  Canada), we try to have connection changes early on the day in Europe and then fly afterwards in one go to our final destination.  This way we can settle quite quickly on the 2nd plane, nap or sleep , play without interruption of a transit halfway with another disappointing half that needs to come. Once we land...we arrive.

As stated before, it had not been easy to find good flights to Calgary and we had almost aborted our idea to go all together and were looking for alternatives in the US.  But in the end we found what we were looking for leaving in Schiphol, Amsterdam early in the morning.   In order to avoid all stress and traffic jams and nightly departures, we left the evening before after work and school and checked -in in a hotel near Schiphol where we could park and leave our car behind during our stay. For our vacation in Florida in 2017 we have benefited from the same Park, Sleep, Fly formula. Very practical to start off hassle-free. 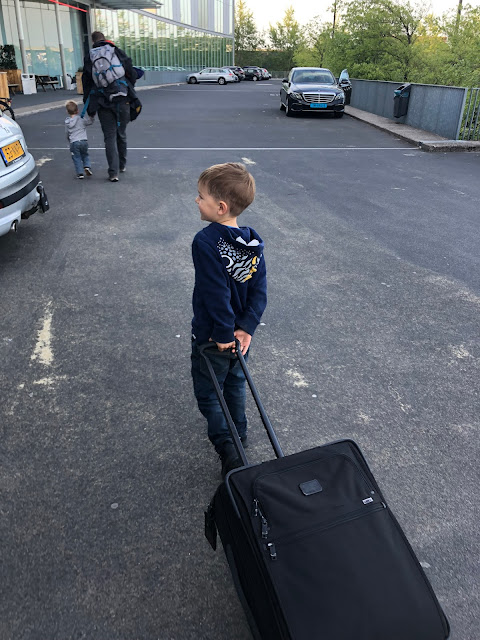 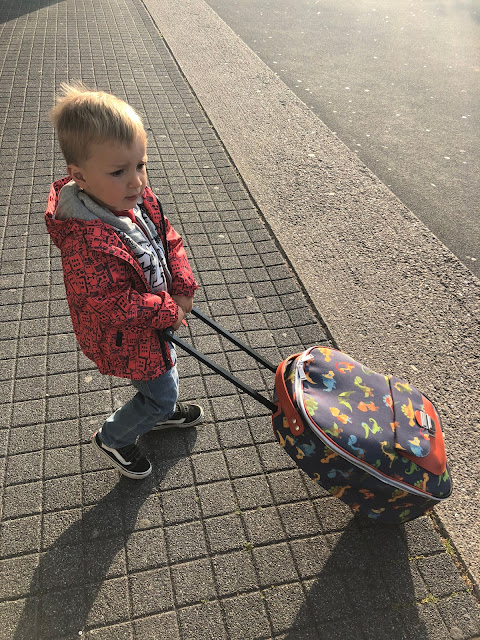 I must admit that our children are spoilt by the habit of having lounge access thanks to Jan's frequent traveler status. So after checking in our suitcases at the airport they believe that the next step is going to have a drink and a snack while we wait in the seats. I adore this picture from Beertje who seems to be a perfect barfly already at his age...hanging on the table in a very experienced way :D. 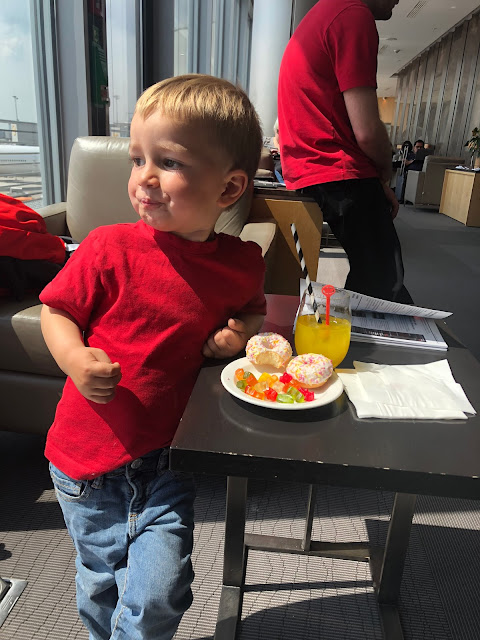 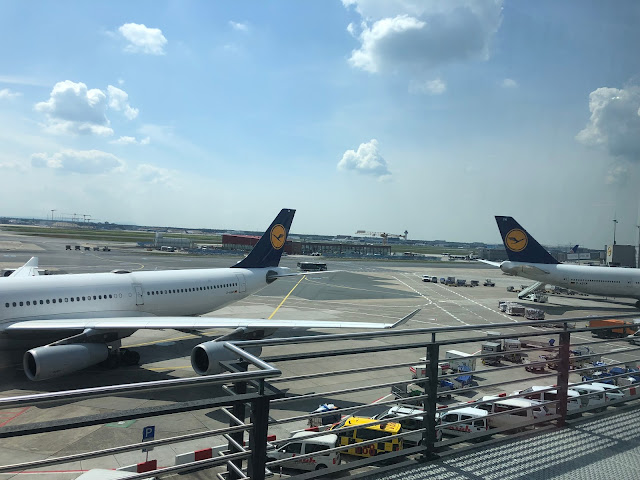 For the first time we had a 3+1 seat configuration which meant that one adult would have both children next to him/her.  That was the first time since usually we sit 2+2.  Previous year already we noticed that Kabouter didn't require any special attention and could keep himself quietly entertained all flight but at that time Beertje still needed getting entertained.  But he was one year older now and was better prepared on what was going to happen.  Both boys hooked themselves up to the entertainment system and with their ipad... and we didn't hear them anymore. 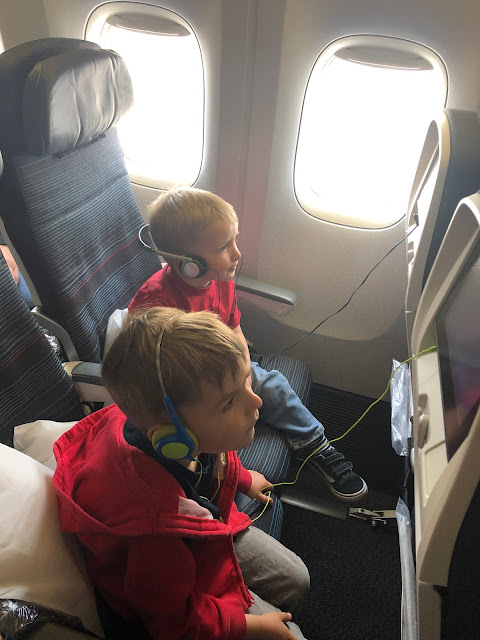 Beertje is a boy who will sleep sufficiently and will go and have a nap when it's needed. So it was no surprise that after a few hours he nestled in his seat and had a good long nap. Kabouter on the other hand, was despite all our encouragements "not tired". When we urged him to sleep a bit as well, he closed his eyes for a minute and then claimed he could not fall asleep. We told him to sleep since afterwards he'd have to continue to be awake for many more hours... but he stayed awake.

During the bumpy landing he became very pale "I don't feel very well".  I belief it was more fatigue than motion sickness. And so we arrived in Canada and went through customs with one tiny happy energetic boy and another pale one carrying an empty vomit bag against his lips out of precaution.  Fortunately customs and the rental car process went smoothly and slowly also Kabouter started to feel better again.
Our hotel in Calgary was just a few minutes away from the airport and we all jumped into the hotel pool to get re-energised and stay awake a few more hours.  However the children didn't make it for our early dinner anymore: when their ordered meals arrived in the restaurant, they were in the mean time sound asleep :p. 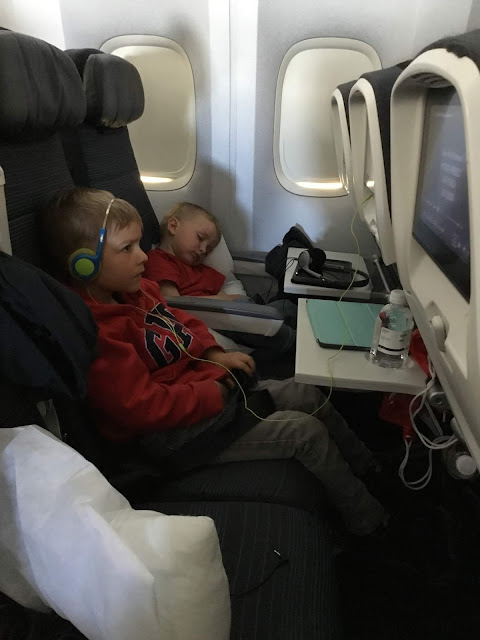 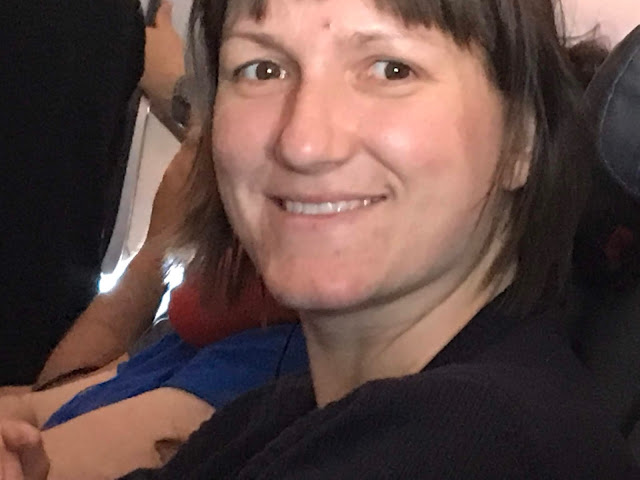 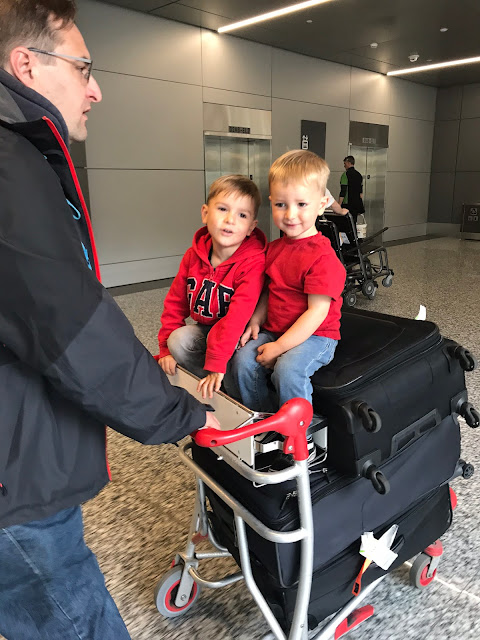 For our return flight, we had some lessons learned and we had preached to Kabouter that he was obliged to sleep during the flight.  It was a night flight so chances were slim that he'd manage to stay awake but he was briefed anyhow. After the meal service on the flight we implemented a true mandatory "bedtime" for the boys, which worked out fine this time.  We all managed to get about 4 hours of sleep. Ugh still not as much as I hoped.  I wish they did meal service much sooner on those return flights but it is what it is.  At least we had an other uneventful flight with our 2 little experienced passengers. 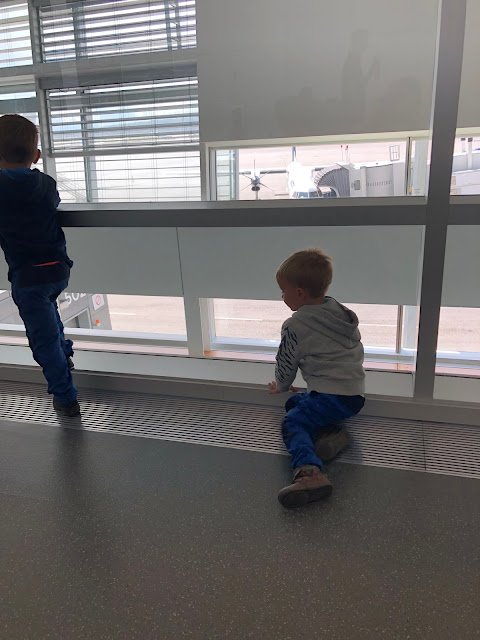 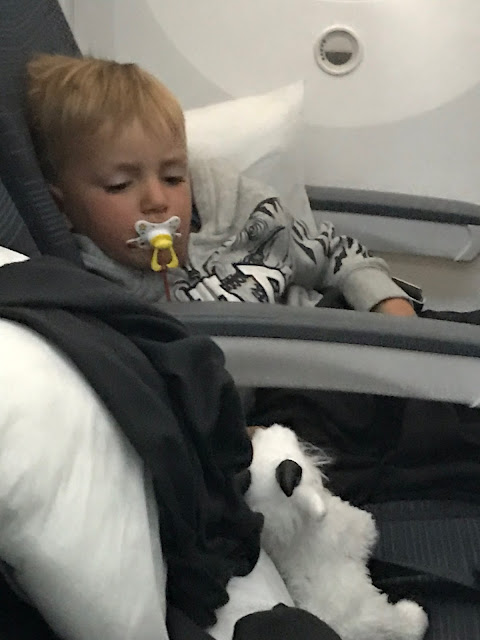 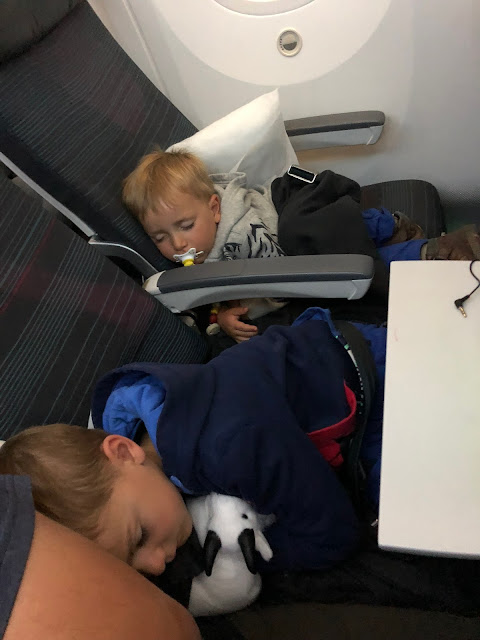 When we design roadtrips with the children we try to calculate our destinations at maximum 4 hours driving. In theory, each morning when leaving a hotel, our GPS stated that we'd arrive for a late lunch at our destination.  Perfect for them and especially perfect for me, as I must admit that I hate sitting in the car for a longer period. That really stresses me out for no rational reason.

But with driving stretches of 2-4 hours a day and stops at any tourist worthy stop, it breaks up the driving a lot. We tend to pick-nick a lot in beautiful landscapes, visit all visitor centers, try to do small walks, visit musea, ... After each stop, our car seemed to collect more booklets, flyers, stone collections and a pile of sticks in the backrows.

Our car had been upgraded to a ridiculous sized big black truck with blinded that would seat 7 people and a big trunk for all our suitcases. A perfect car for a mob ;).  A standard car wouldn't have fit all of our luggage though. We rent the child seats at the rental car company. North-American cars (and north american child seats) tend to have some cup holders which proof to be very important during a road trip to provide the children with regular drinks or cups with left-over

After some visiting the children usually had a nap in the late afternoon in the car, which made driving very peacefull.  When they were awake, we listen to a lot of music playlists composed by the favourites from Kabouter mostly (we got rid of most Studio 100 crap , yeay, and are now totally into Ketnet hits and #likeme. You don't hear me complaining).

For the first time both boys started to manage to have periods of self-entertainment. They were showing creativity in inventing some games themselves or continue some games we played without our participation. The introduction of the guessing game "I see I see what you don't see..." was a big hit and we've also spent hours interviewing each other. The interviews were mostly just asking "what is your favourite meal, drink, color, film, book, animal, ..." without much depth but now we are all clear on what our favourite things are in life.  Of course we were also always searching for wildlife...or yellow schoolbusses (that was Beertje's vacation mission).  And when approaching our destination, the children had to look out for it and see who could spot it first.  Such winner could sometimes win an ice-cream!

I had also feared that the just recently potty-trained Beertje would trigger some emergency stops but that wasn't the case in the end. 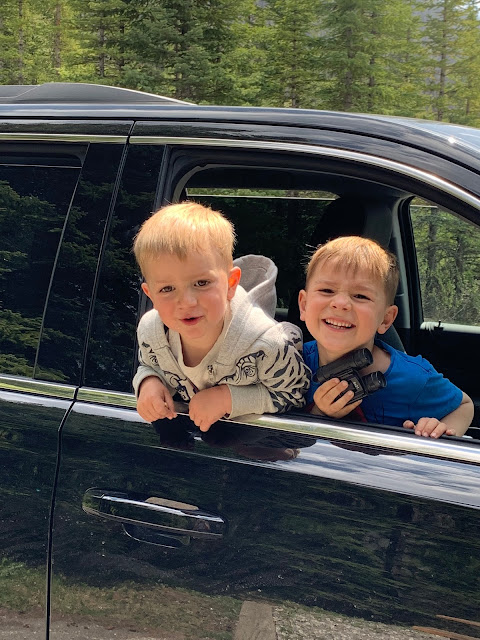 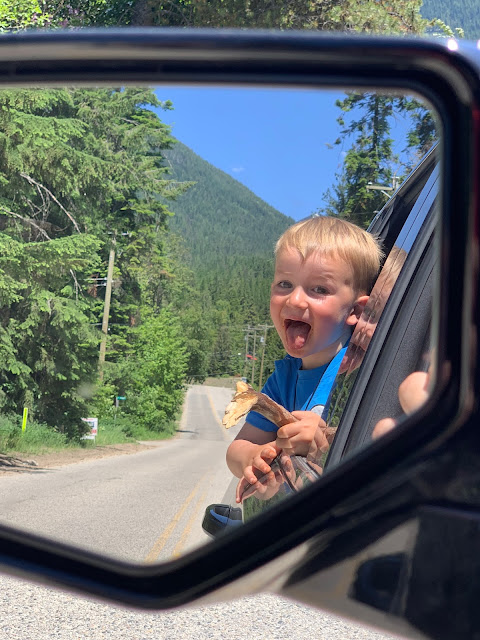 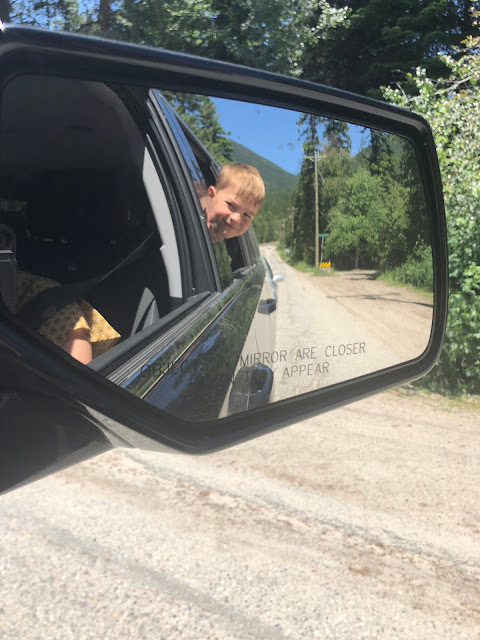 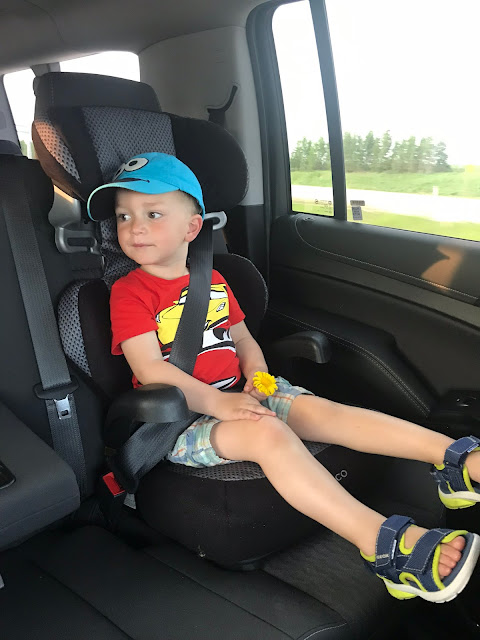 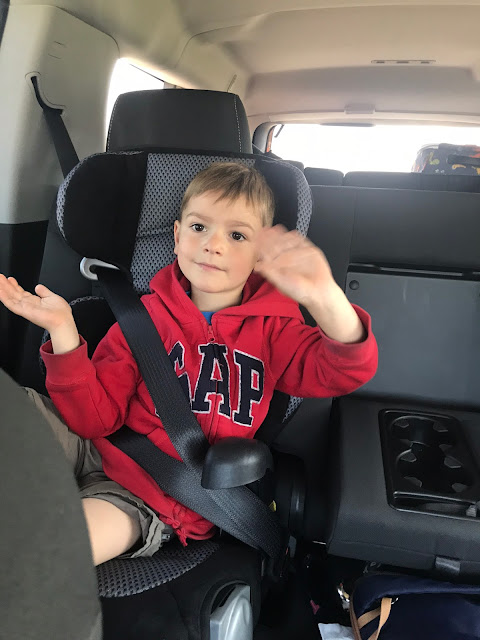 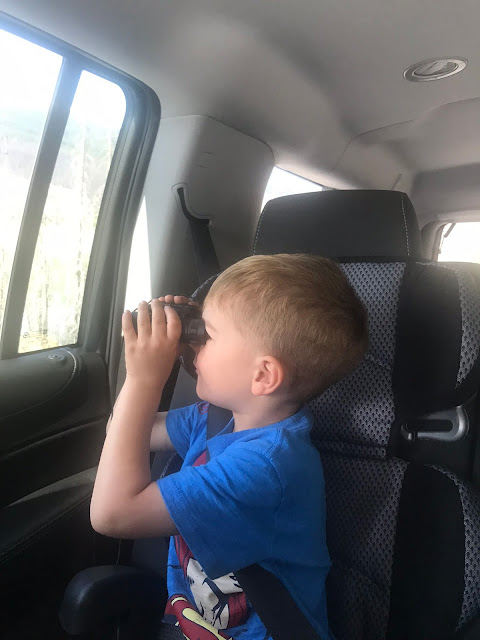 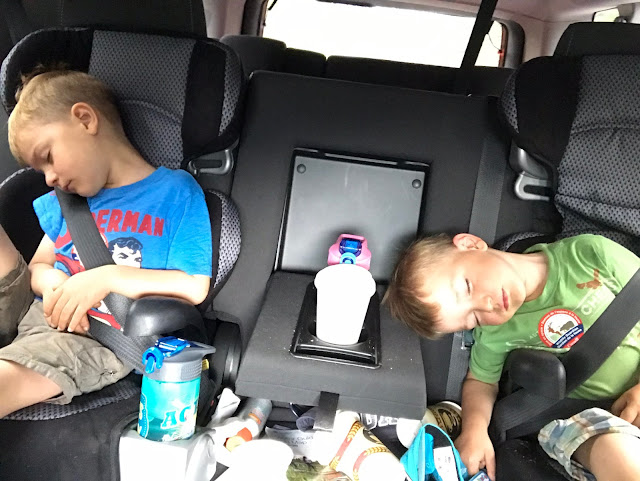