Fall in our little garden 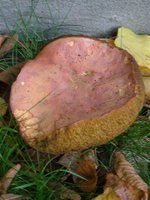 This thing was huge!! I had never seen pumpkinlike mushrooms but now there are 4 of them in our little garden. Beauties, don't you think?

By coincidence I made some pumpkin soup this afternoon, inspired by a Martha Stewart recipe I saw on tv. I don't like her show really since I think it's too much of a stereotypical "housewife" idolation and too much an "ego" show with ideas presented that aren't even that great or stylish at all. But since a couple of months, Vitaya (a lifestyle tv channel I often watch) seems to be completely invaded by Martha so I can't escape her really.

But this recipe seemed cool and I kept watching the explanation: pumpkin soup finished with some berries and roasted chestnuts. And the tip to easily deal with pumpkins helped a great deal. Usually I struggle with cutting up a very hard pumpkin to pieces to then boil it soft. Following the tv tip I just cut it into 2 pieces and put it in the heated oven for a while. Afterwards I just needed to scoop up the soft meat out and it was already a orange puree. No more need to mix it either. Now I can't wait to taste this soup.
Email Post
Labels: Home sweet home Weather gods