This winter I had redone our bathroom . The clean fresh bathroom was such a relief but the all-white felt a bit sterile so I dreamed already quite a while to add some color.

Just when I was ready to tape off the edges, I noticed that the paper started to show some small swollen cracked spots.  Darn. Well if you try to do everything yourself, you also make mistakes. It turned out that our choice of paint for the humid bathroom had not been sufficiently strong to withstand all the damp.  Arrrrgh, big  disappointment.  Instead of coloring 1 row of tiles quickly, the bathroom needed a bigger make-over already to prevent more damage.

So last weekend our camping plans were cancelled due to the rainy cold weekend and how else to better spend an unexpected free day on a grey rainy day, than to paint? 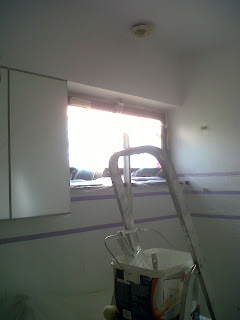 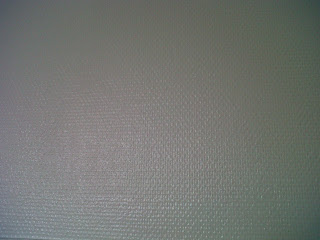 A few hours later all walls & ceiling looked nice shiny white again, this time with paint that should not get bothered by the damp as it could be applied on the outside of our house as well :D.

And then it was finally time to add my little funky color. I was so excited to get it finally done, looking forward to the result. One row of tiles in bright turquoise with the name "snorkelling". I just had to have that color. 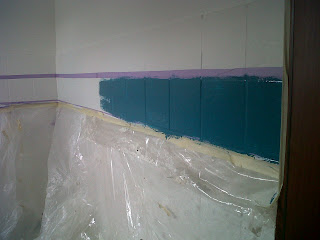 While painting I got this weird feeling that despite the hours of carefull taping I had done, the result would be disastrous. The big color contrast needed a delicate lining effect but I did not dare to create it by free hand.

As soon as I was done, I pulled off all tape immediately as I knew that letting it dry first, enhanced the risk that the paint dried through the tape.  But it was too late already. The result looked horrible, as if had not taped anything at all. Everywhere drips had managed to roll down behind/through the tape. If the paint had been red, it was a horror scene. I was so terribly disappointed.  My friends on FB could have guessed something was wrong as I had announced the painting...but no pictures followed. 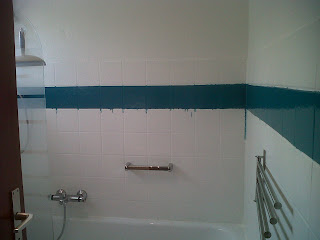 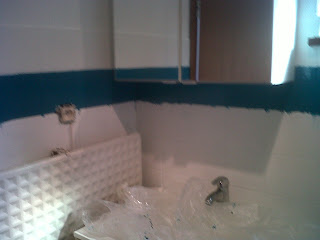 But this weekend I spent several hours with a tiny brush, religning the white edges carefully & patiently layer after layer with my free hand until it finally started to look like I had envisioned it.   I can still see the 'retouches' I've done, but I hope it looks decent enough to show to our visitors now and that it is no longer screaming "amateur".  I'm still very fond of my concept :) 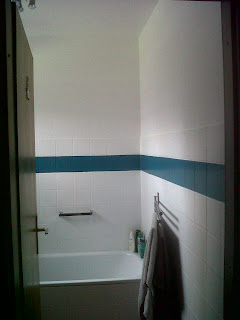 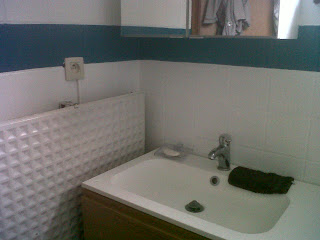