Two years after the first edition of the circus festival CIRKL in Leuven, there was the 3rd edition in the 3rd weekend of May.

While I had already a lot on the agenda, I was happy to find a little bit of time to head downtown and explore a bit again. We must have missed it previous year due to our vacation period.  The big predicted thunderstorms were nice enough to wait until we were back home in the evening.


Follow-me by BeFlat
The children peddled bravely on their tiny bikes to the other side of the city...which is a nice distance for them to cover. Just before arriving on the festival terrains, we all of a sudden ended up in the performance of Follow-Me by Be-flat.   Under the drumming on street poles and fences, 10 parcours artists from Leuven, climbed walls, roofs, up to the chimney of a nearby house above the 3rd floor where we could spot 2 pairs of feet in the air in some handstand. 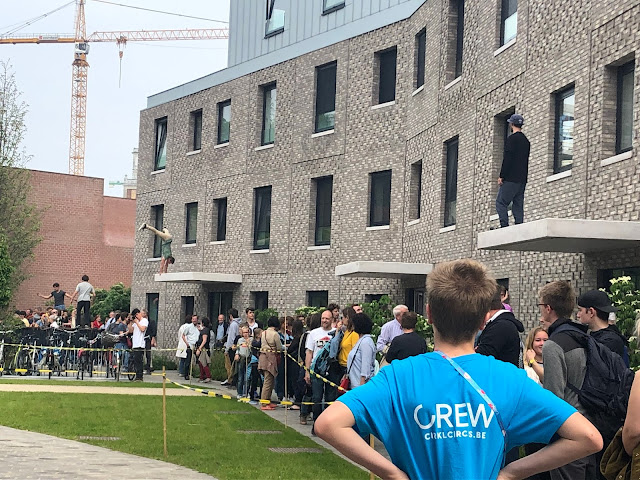 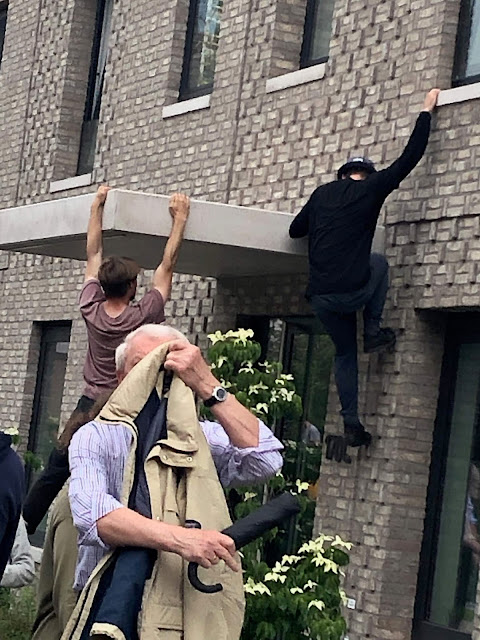 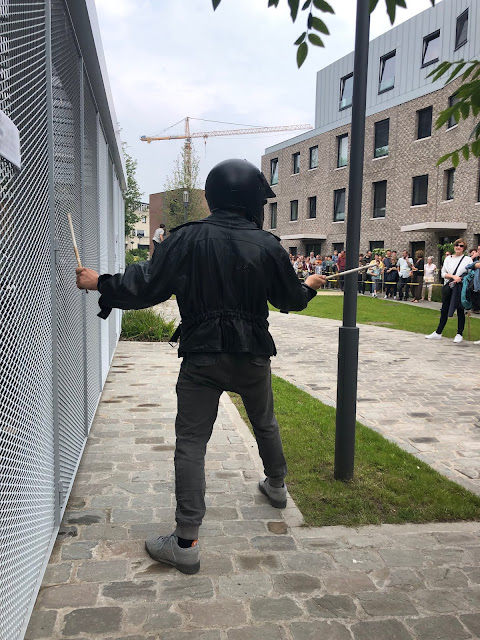 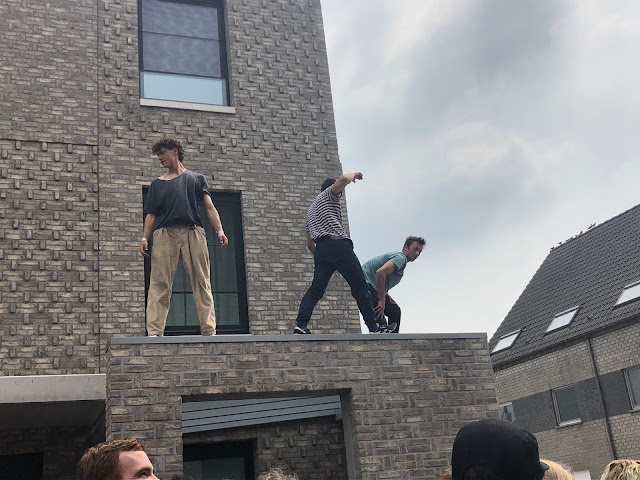 We went to the harbour of Leuven where Beertje only wanted to watch the boats and play around in the art installations.  We ran into Kabouter's best friend and then we all joined the performance CIRKLorama .   In this performance you join a little movietheatre inside which opens the curtains and turns around slowly multiple times so you get a 360° view on the surroundings...the people outside , some of which act and some of which just walk by or observe the theatre. For the observers, it's fun to see the actors and participating extra's, that also turn around behind the back of the theatre to get changed and to keep out of sight :D.
For the viewers inside, it's hard to spot who's in the act and who isn't but slowly you start seeing a little love story developing of a man meeting a women, exchanging phone numbers, phoning, exchanging flowers...and it ends with a wedding.  Some little other stories seem to happen. Pretty cool concept, but not certain whether the little children grasped it a 100%. 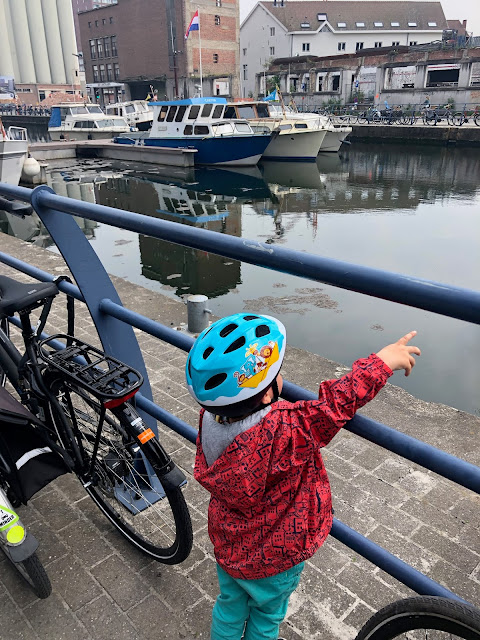 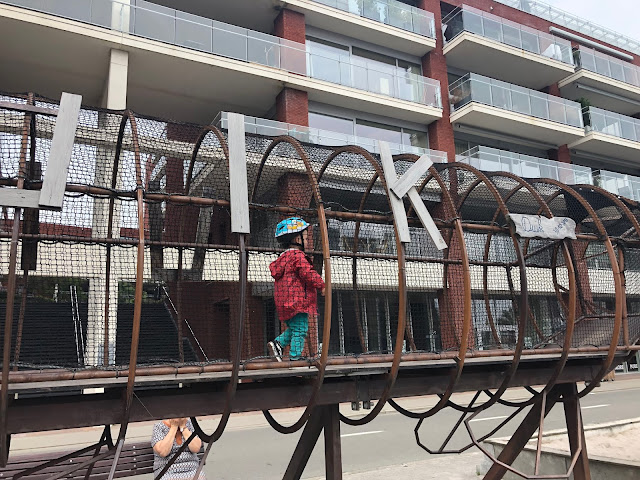 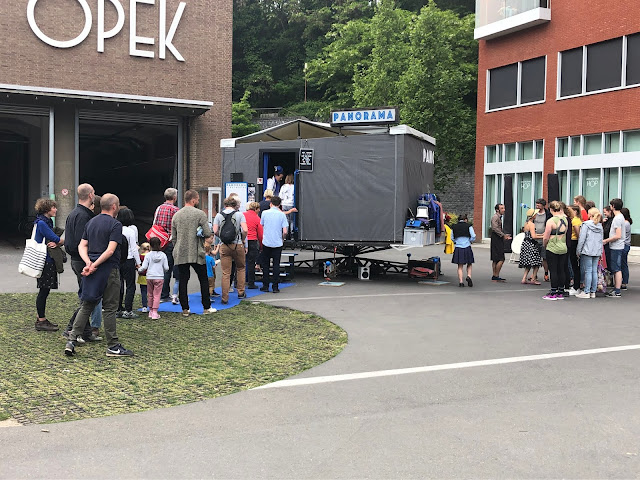 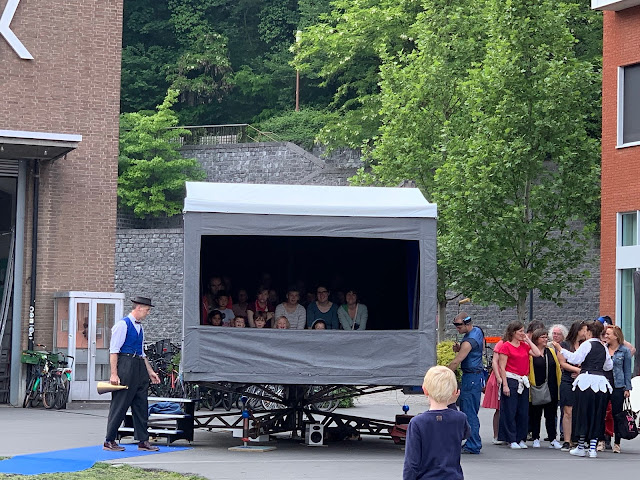 We joined the 2nd half of an acrobacy performance on the new square under the viaduct nearby the harbour. To my surprise it was a cosy place to go and watch the artists. 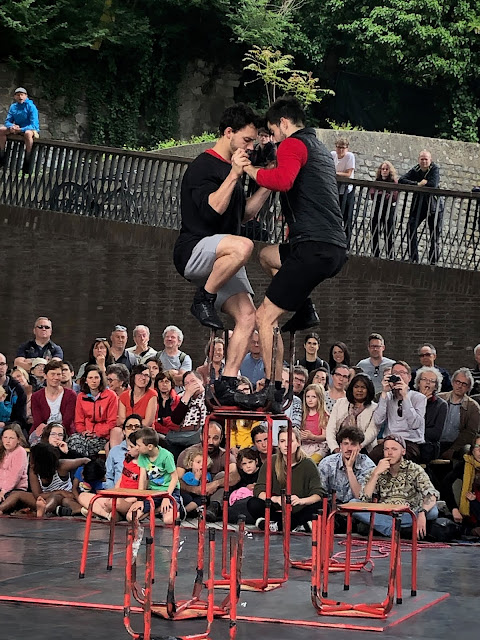 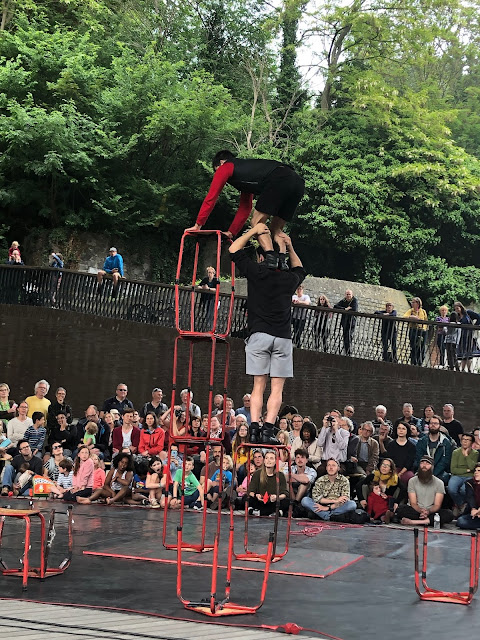 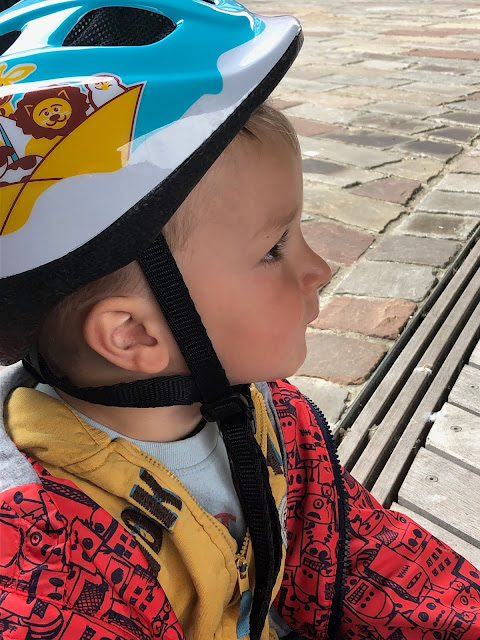 To end we returned to the Sluispark which is the festival's main park with a lot of performances around it, but we just hang out a bit and let the children explore a bit the circus activities and toys.  And then our children were eager to start biking back home...just in time to be inside before the rain really started coming down. 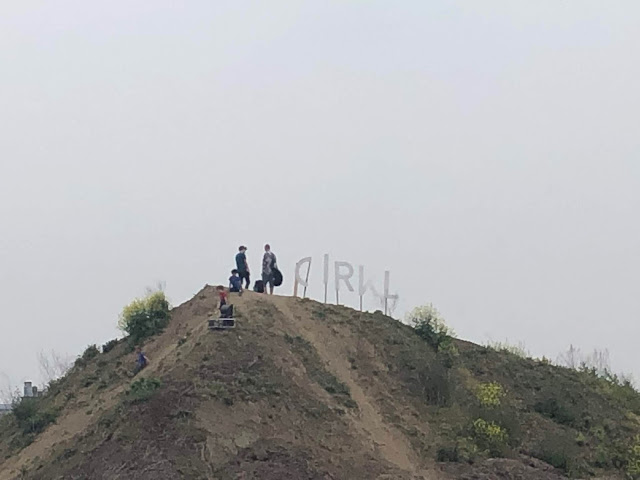 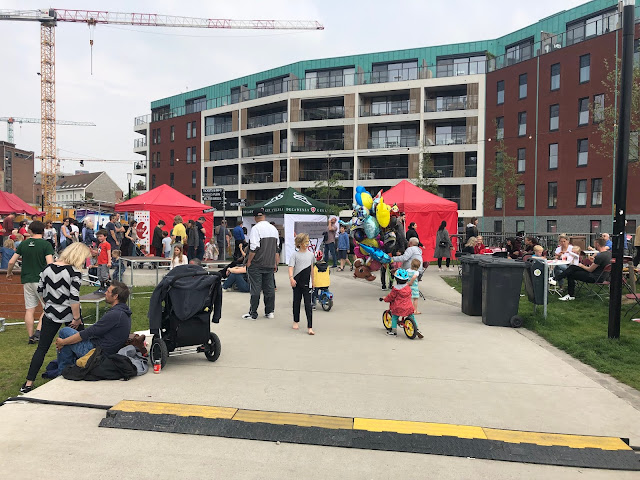 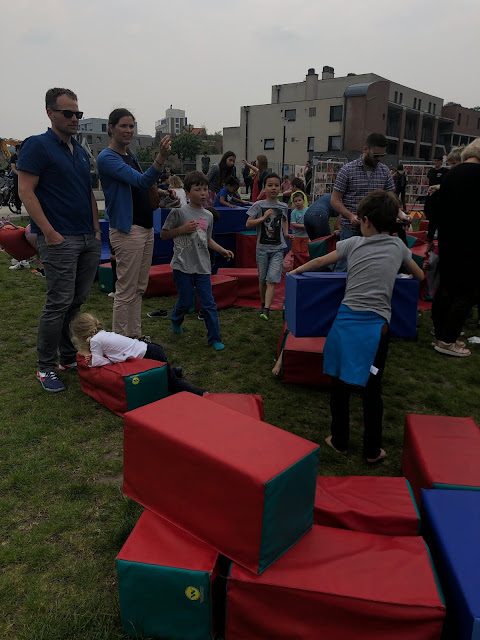 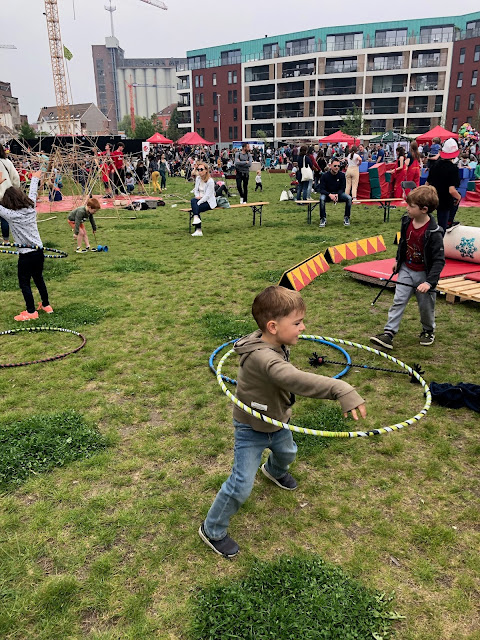 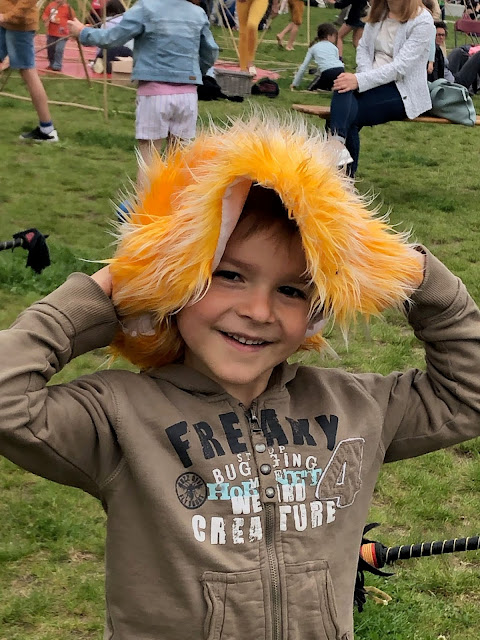 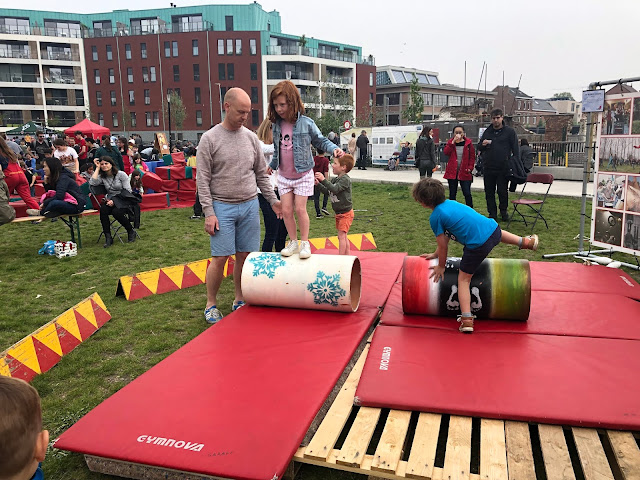 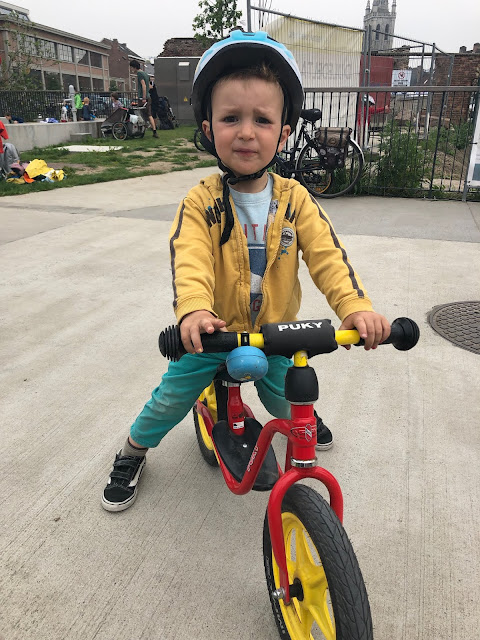