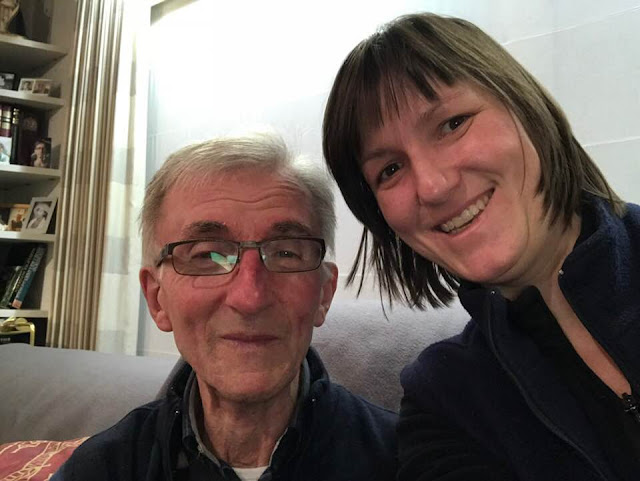 This was my most liked picture on Facebook in 2017.

My facebook memories can be quite confronting. I post and use Facebook a lot and therefore it's my best diary.  I realised today by reading those memories that this day has brought us a remarkable amount of turning points in my family.

Hope, joy, fear and stress
Your future gets defined now
We all hold our breath
On Dec 3 2008 I tried to work as a distraction not to go crazy at home, while my father was more than 8 hours scheduled in neurosurgery.  During this risky operation without anesthetics (!!), he'd get electrode implants to stimulate his brain and stabilize  the progression of his Parkinson's disease.  My sister and my mother alternated part of the day since a close relative had to be present in the room to monitor my father's responses and observe exercises he'd do to check whether his responses were still "him".  I was so grateful that they both had volunteered to do this as there was no way I would have had the courage to have been present.   I still don't have the guts to watch documentaries on this type of surgery on tv.
My fb memories show my worries and stress during the day and the relief to have been able to visit him in recovery in the evening.

The recovery took months and was nerve-wrecking since it takes time to find the right tuning of the electrodes and it's a trade-off between physical mobility and mood/personality changes.  But it all ended well and it froze his degression for many years.

On Dec 3 2017 I posted the above picture when my father returned home after spending 5 months in the hospital.  In spring 2016 he had broken his hip on vacation in Spain. The month that followed were months of surgery, recovery but also a strong regression of Parkison's...mentally and physically.  In 2017 his hip replacement was about to break again and had to be done again...which led to more difficulties , another fracture and surgery, ...too many anesthetics in too few months for a Parkinson's patient.    But after months of worries, on dec 3rd my father could return home.

On Dec 3 2018 we had just spent a weekend in Paris  and I had two days of training nearby my old hometown, sleeping back at home for a night.  I felt the difficulties at home, the stress, the confusion and realised that my father would need different care in the future. I knew everything would need to change.

Today was an uneventful day.  My cold seems to be on the mend.  That turning point is good enough for me today.
Email Post
Labels: Family Health