Sculptures and statues in Leuven

After I posted about the street art in Leuven. (which was actually the 2nd time but I had forgotten about this one from 2014) , I figured I'd pay a bit more attention to the sculptures and statues that are around.  To be honest, it is something that I rarely pay attention to but maybe it would be more exciting if I simply started paying attention to them.

The first sculptures were actually a discovery that excited me before I even planned this post.  They are situated next to the trackfield of the University of Leuven. 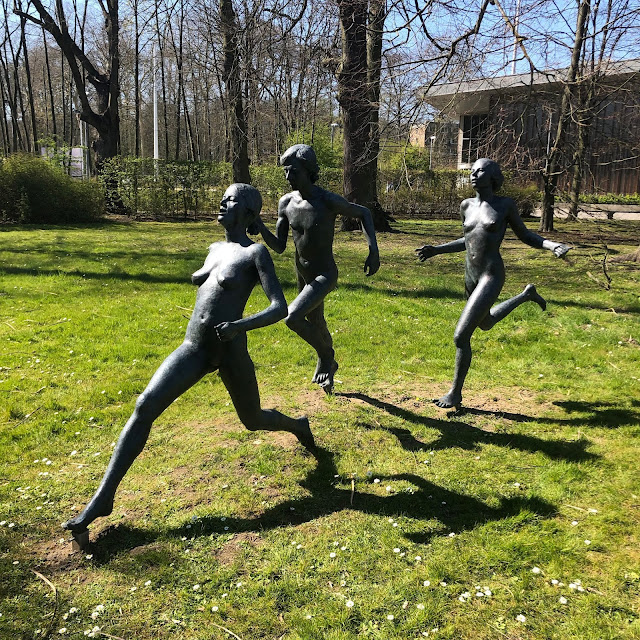 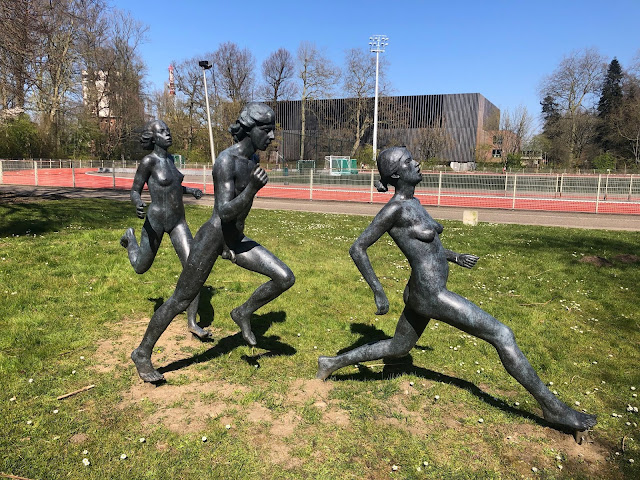 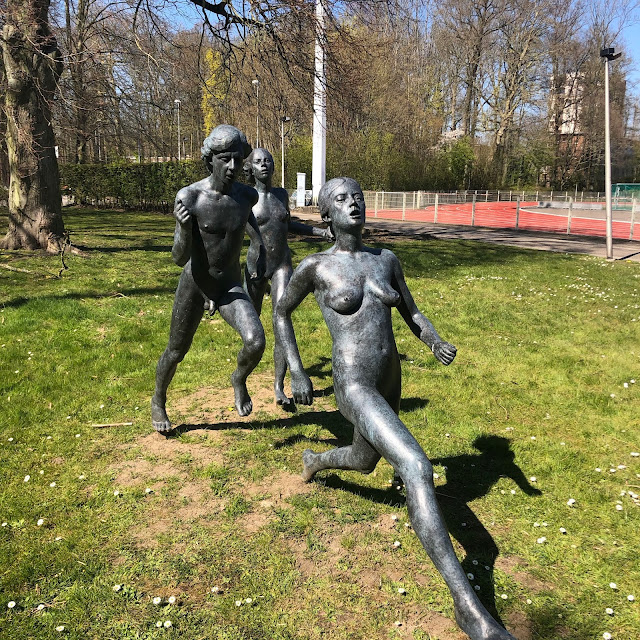 This one is found in front of the faculty of social studies.  I've overheard a tour guide once when walking by that it is called "zus en zo" because that's the answer of students on how their exams went. "so and so". Fonske, the fountain of wisdom is the symbol of this university is probably the most known sculpture and he's right in the heart of the historic city center.  He pours beer in his head while studying his behaviours...or he is a true fountain of wisdom :p.
Every year he also gets dressed up during the Abraham celebration by the Men of the year , those that turn 50 year old.  Local sweets are also "Fonskes". 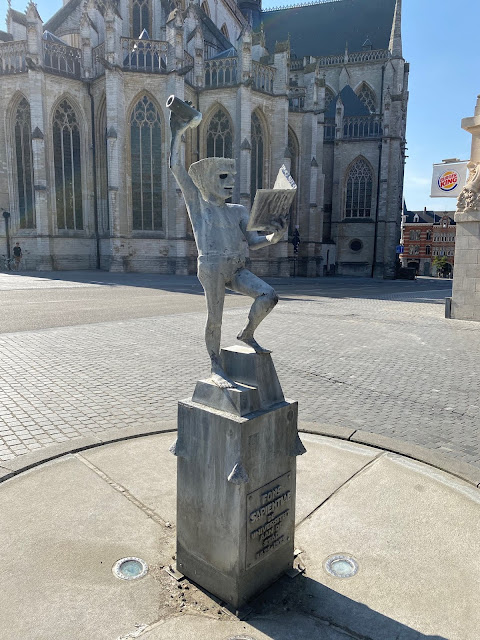 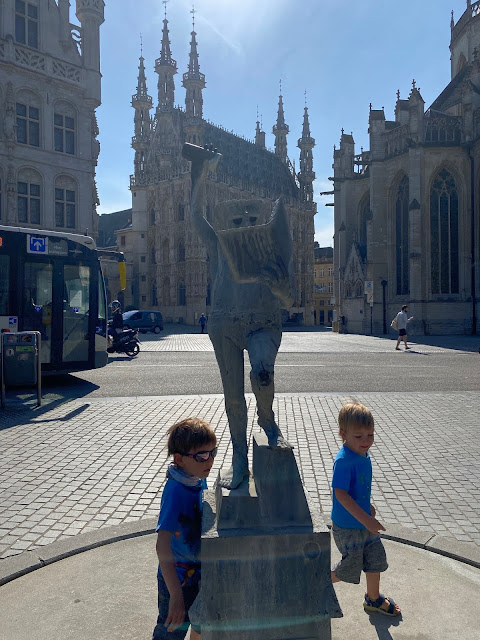 Kamerood Sestig in the city park is also part of the Abraham celebrations and he always gets dressed by the Men of the Year that turn 40. 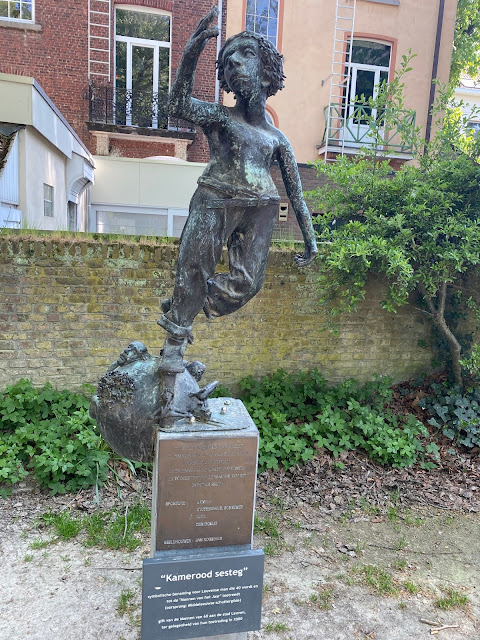 And of course Abraham is the place to be during the Abraham celebrations because here the men of the year have seen Abraham when they turn 50. 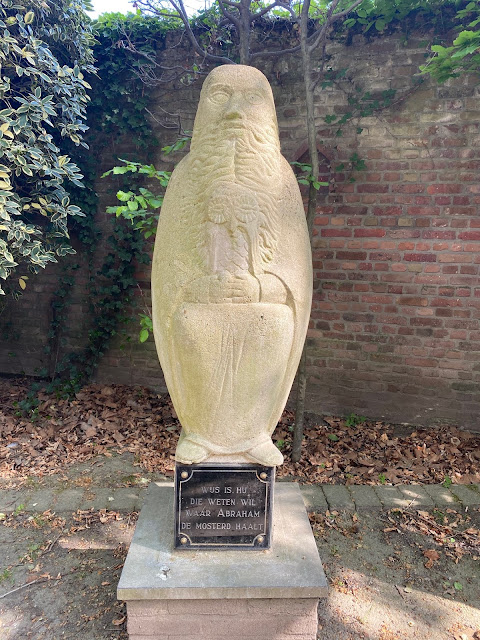 On the Herbert Hooversquare, there is a statue for Edouard Rémy, the founder of the Rémy industry which is the world's biggest producer of rice starch and all rice derivates (but currently part of a German group).   In Wijgmaal you can find the heritage buildings of the old factories along the canal and in the city center there's also local service centers and care centers named after Rémy.  He's also a well-doer So if you ever wonder what he looks like: well here he is. It already dates from 1899 and is in art nouveau style designed by the famous Victor Horta.  Edouard Rémy is in the middle with weirdly multiple people full of sorrows at his feet. 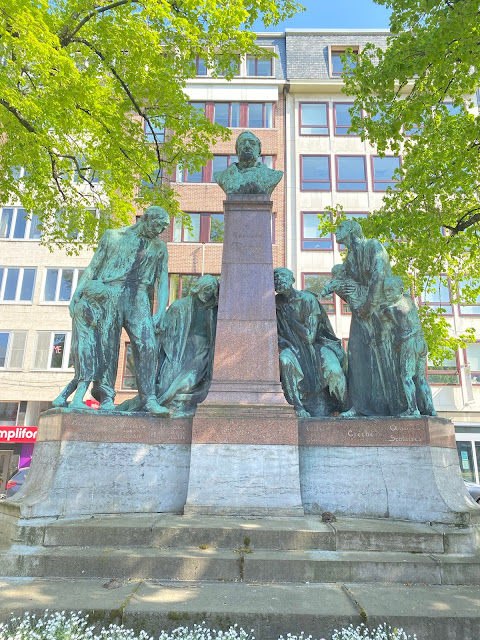 Justus Lipsius dominates his own square.  He is a local humanist that studied and taught at the university. 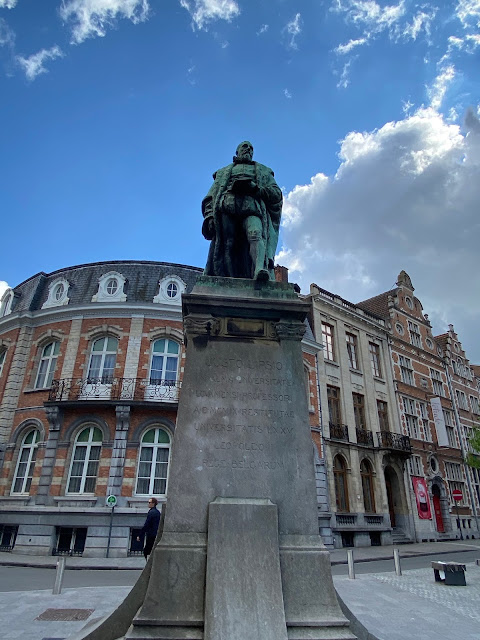 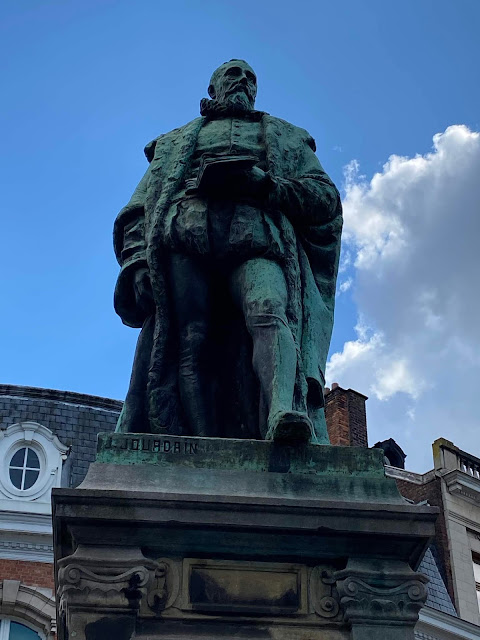 Mercator, the Belgian pioneer in cartography has lived and studied in Leuven as well so you can find him a little bit outside the historic heart of the city. 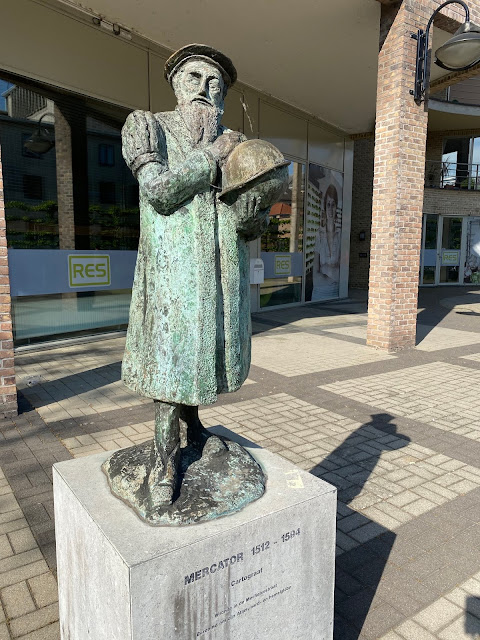 Sometimes you have to look up.   I discovered a week ago that a recent appartment building downtown in the Tiensestraat has this mysterious figure as a sculpture on their terrace. Very intriguing and fun to discover. 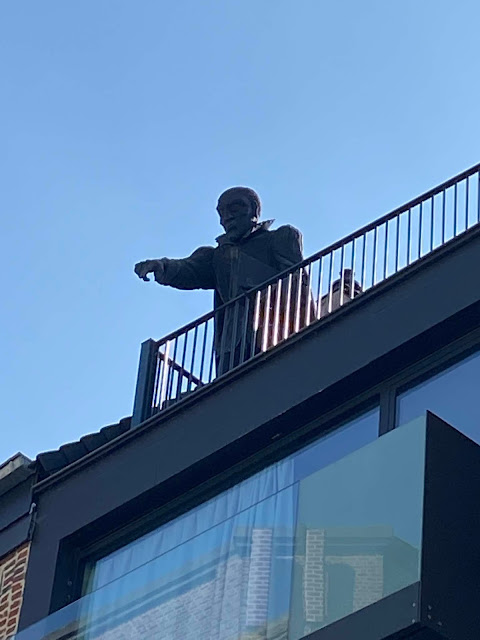 On the city ring 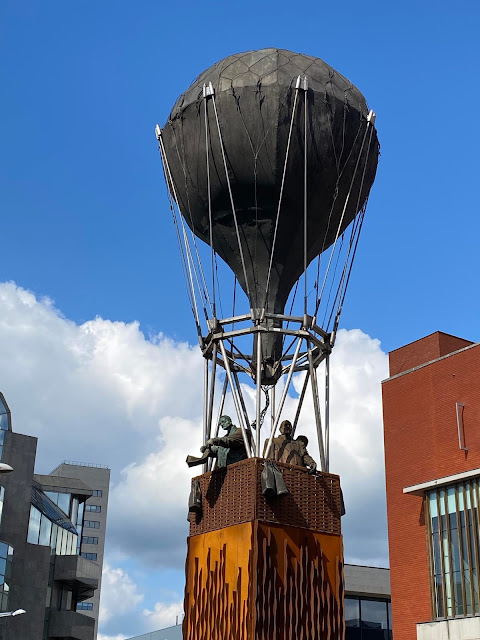 In front of the city buildings there's this abstract sculpture.  No clue what it represents. 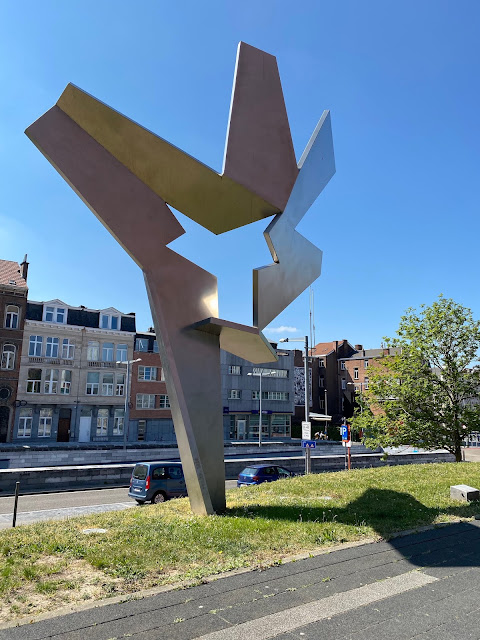 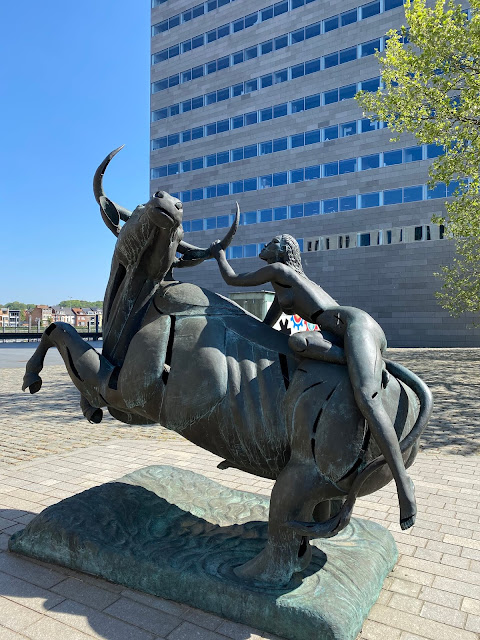 In front of the St Antonius church a lot of old sick chesnust trees had to be cut down (as well as elsewhere on the ring road).  At this spot, part of the cut tree was has been transformed and received a "Leuvense stoof" , a typical regional stove on top of it to represent the community gathering around the stove and finding a spot of gathering and cosyness. 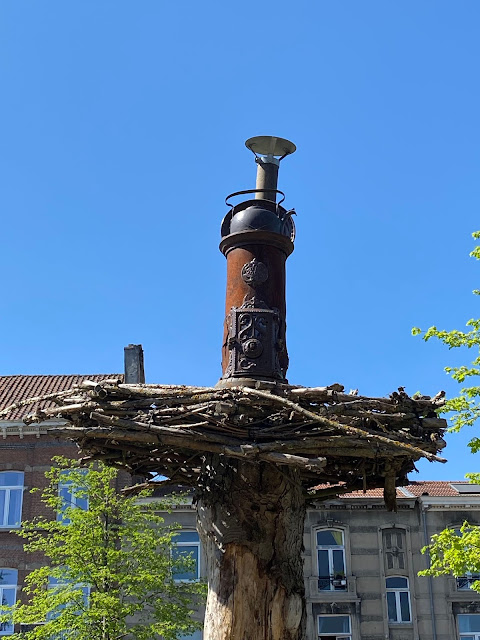 Closeby the Tiensepoort you can find this monument at the Léon Schreursvest about Léon Schreurs. He stayed behind as infantrist on 14th of August 1914 when the Belgian army withdrew. He killed the first German soldiers arriving in Leuven but lost his life as well as the last defender of Leuven in the first World War.  Originally it was located at the crosspoint where he lost his life but now it's moved a bit further. 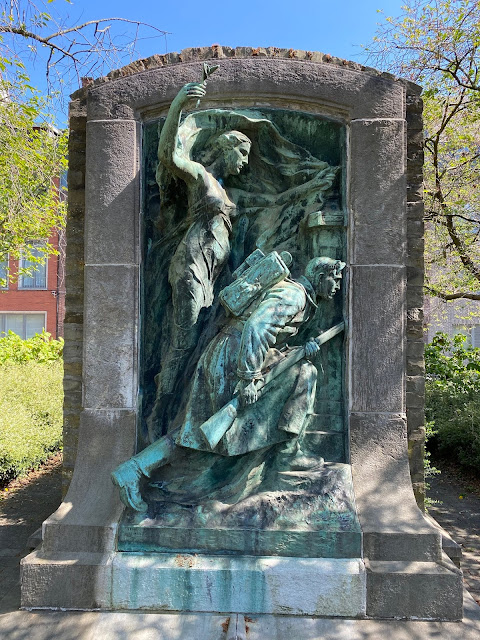 At the city cemetery, you can also find some beautiful sculptures of local celebs such as politicians, mayors, ... 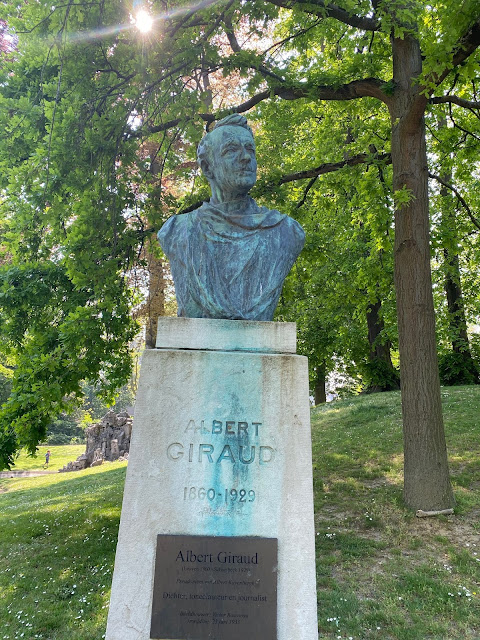 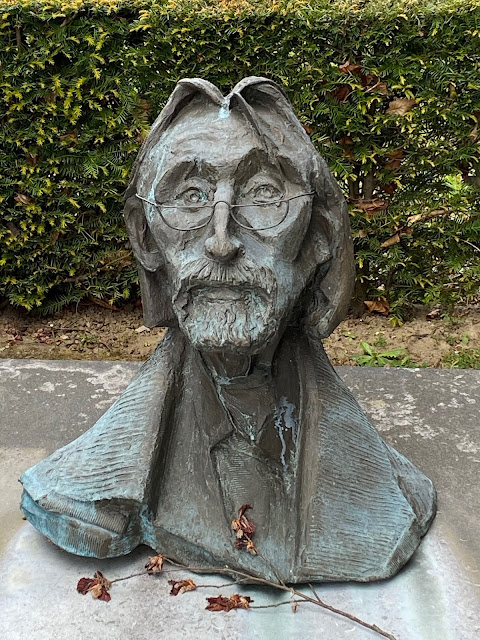 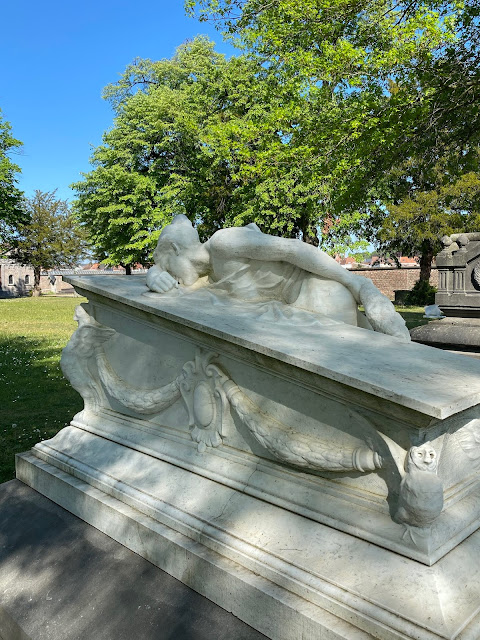 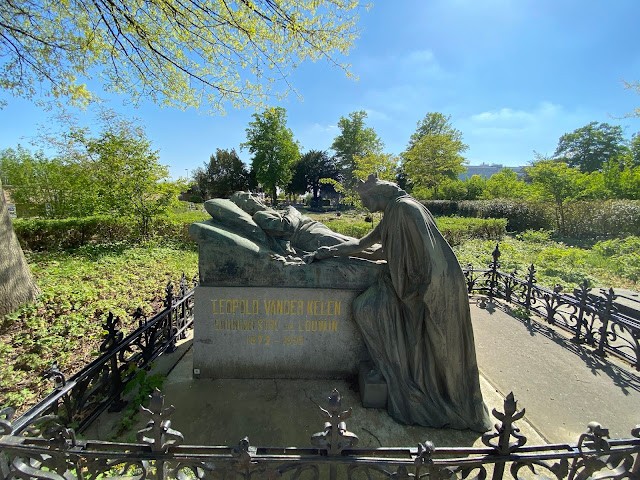