Since the end of the Easter vacation schools in Flanders (not in Wallonia) must do pre-teacher: offer new content.  The focus is on language and math development and putting all other topics on hold.

He still gets 3 mandatory tasks per day as of the start: a math exercises, a reading exercise and another language one.  But now he gets new material. He has learned to read 2 new sounds and starts doing math exercises between the numbers of 10 and 20.  So for each exercise the teacher has now recorded an instruction movie. That means that he is no longer sitting at his little table with his printed instructions and exercise books but with a PC next to him.  We are lucky to have sufficient laptops at home so he can do it even while we are both working from home as well. The teacher made the conscious choice to use recordings instead of live teachings however, to avoid exactly the "lack of pc" problem because the recording can be used whenever it suits best.

The first day he came to ask for explanations a couple of times " I don't get it what I have to do" and turns out he had not clicked on the explanation video first.  That didn't take long and he seems to be able to do it independently now and he picks up the info.
I find it quite a privilege to hear and see how he's learning. How often do you wish to be a fly on the wall of the class when they set their first steps in reading and writing...well I'm now just the parent in the room at home 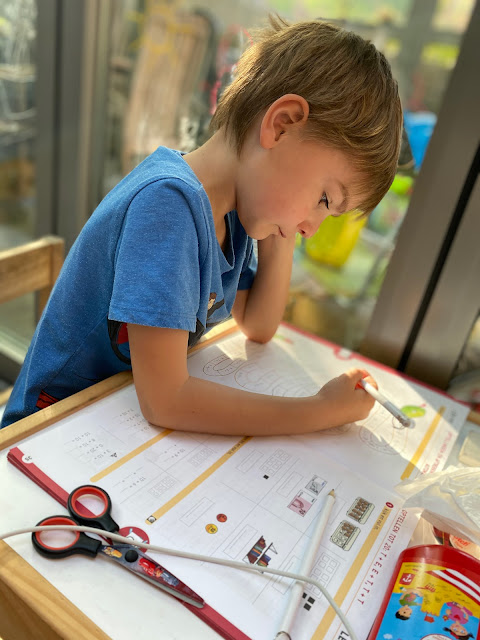 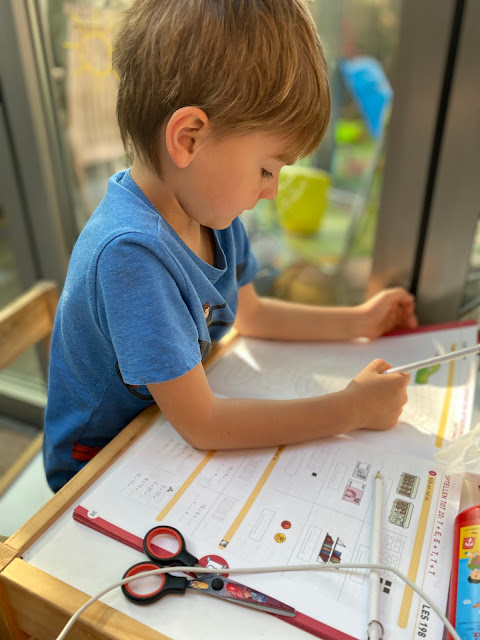 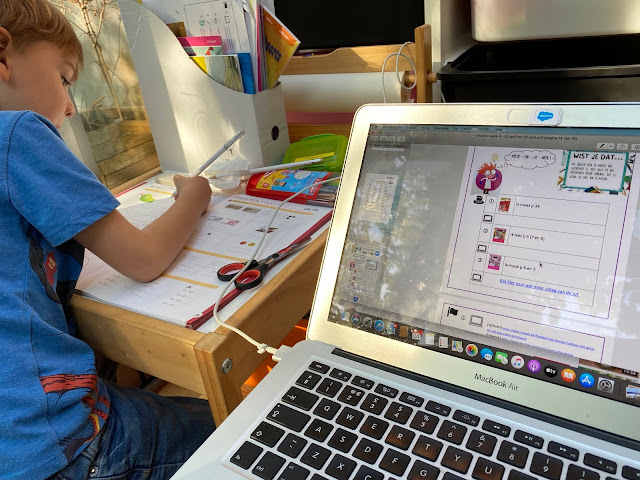 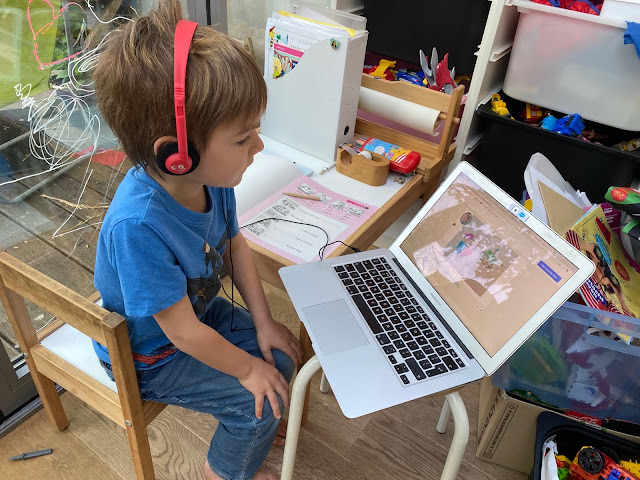 Twice a week on fixed moments he also has a 20' live class with a small group in which his teacher makes them each read in turns and do some live math exercises or other.  So no more social meetings, but a true brief teaching moment that enables the teacher to check in and see how the children are coping.
For us it isn't too long to supervise Beertje from disturbing at that moment. 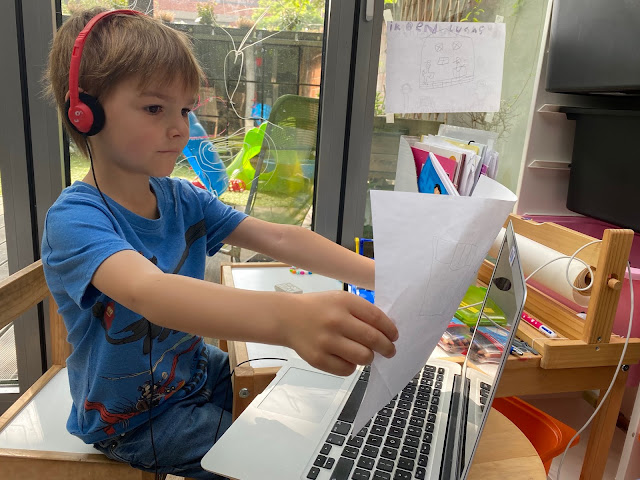 A third call is with the entire class group and is more a sort of exercise game (eg math bingo or so). That's always cute to see how they are happy to see each other again. 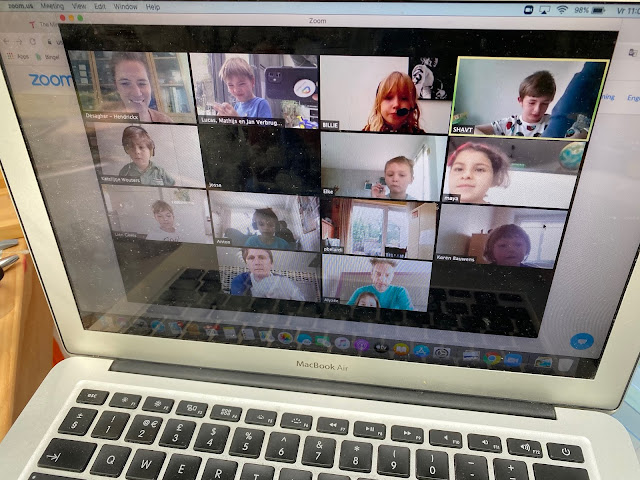 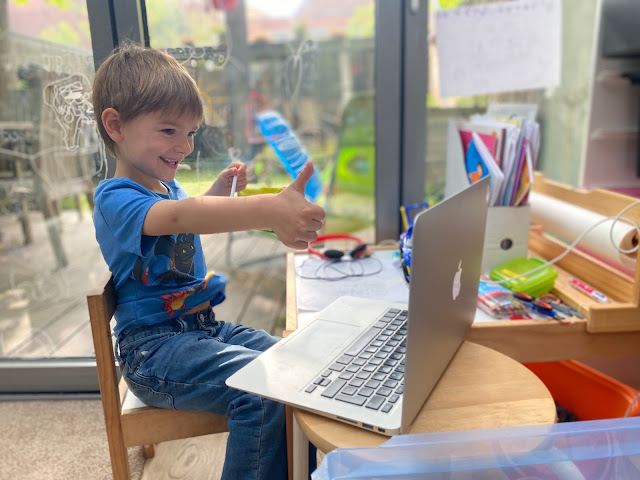 We try to get a rhythm to start doing homeworking right in the morning as we learn it's postponed endlessly if it's not done right away.  Our involvement is merely checking that he keeps his focus, because he can lose concentration and start dragging his exercises endlessly. If we are not in the room, he can potentially work 20 minutes on one sum!
If he speeds up he can be done in 30 minutes but there's days he drags it up to 1,5 hour. Then there's not much motivation left to do any optional exercise. In the last week he's not done much optional tasks at all (unlike the first weeks of homeschooling).  Oh well, we ask them to do some now and then anyhow but don't push too hard since they are optional after all.


We've found some toddler exercise books and introduced them to Beertje to give him the impression he got to do tasks like his big brother as well.  Some days he's really into it, some days not at all. He has a strong will. One of 3 books is completed. I notice he values speed more than detailed accuracy. 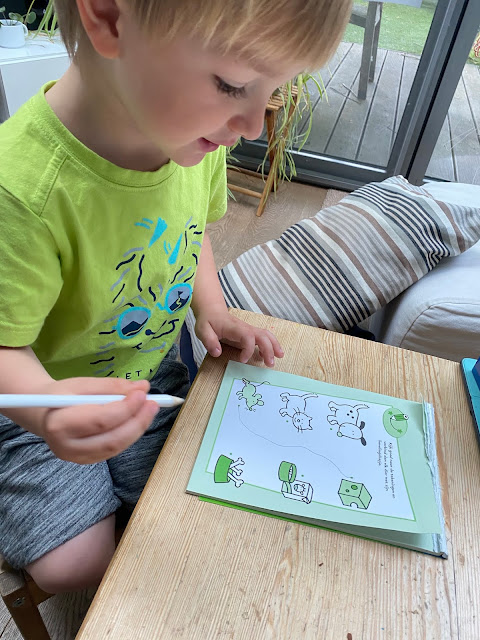 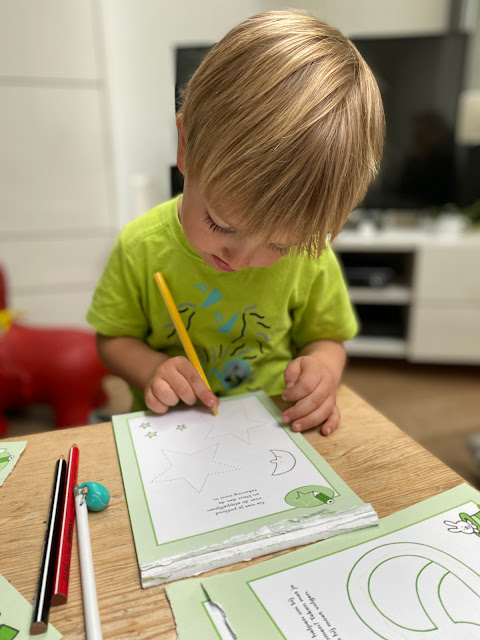 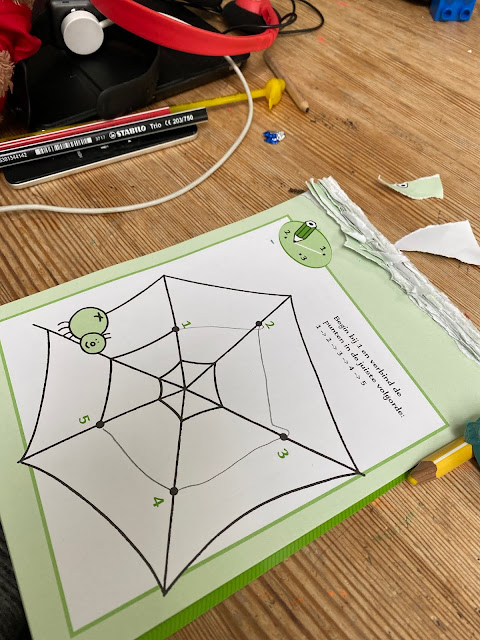 His teacher sends out little films and linked suggested activities sometimes around a theme , eg previous week was rainy so it was drawings and songs etc about snails.  He wasn't too much into it and since all of these inspiration tasks need our involvement and we were working, they were not used.

Beertje also has once a week a one-2-one call with his teacher which seems to work well. That's a moment he can sing with her, show off some toys, she can read a book, ...

Once a week they also do a class call. The first attempt was very chaotic but even the little children start to understand the concept and we co-host the call where we mute all participants and then unmute the child with finger up that gets to speak by the teacher.  Cut to see them all nicely with finger up. 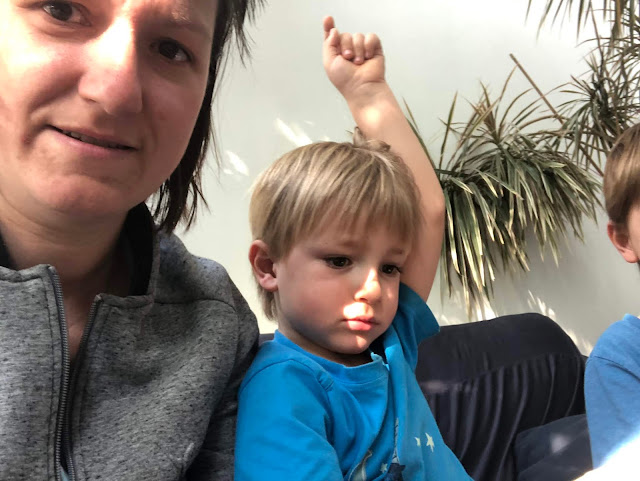 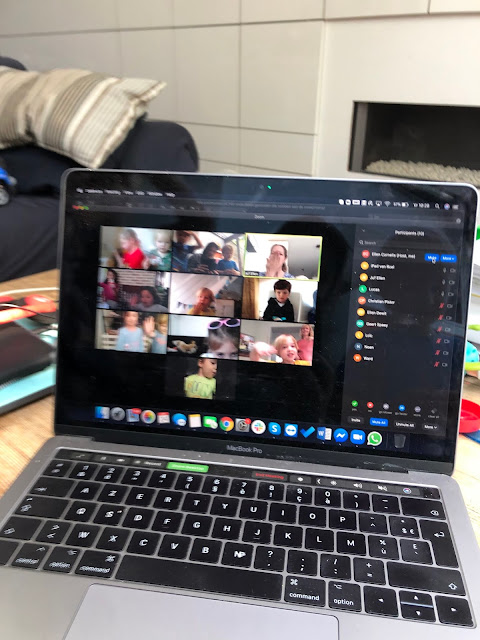 Previous Friday we had a call too, deliberately planned on a national holiday since it can allow some working parents some more flexibility in participating.   It was a morning pyjama call and it was a lot of fun with all of them doing a little dance with the teacher. 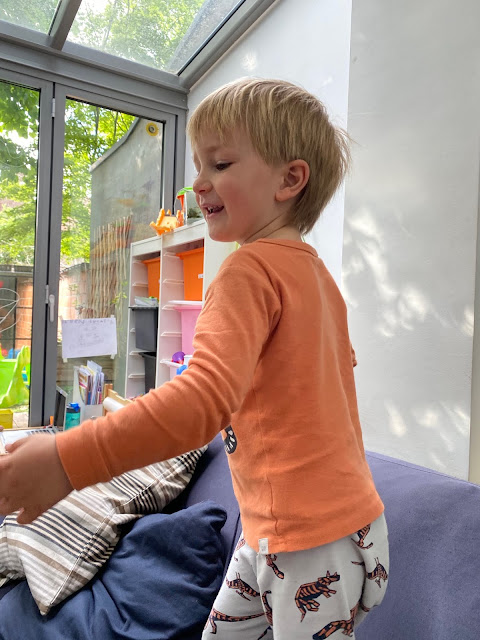 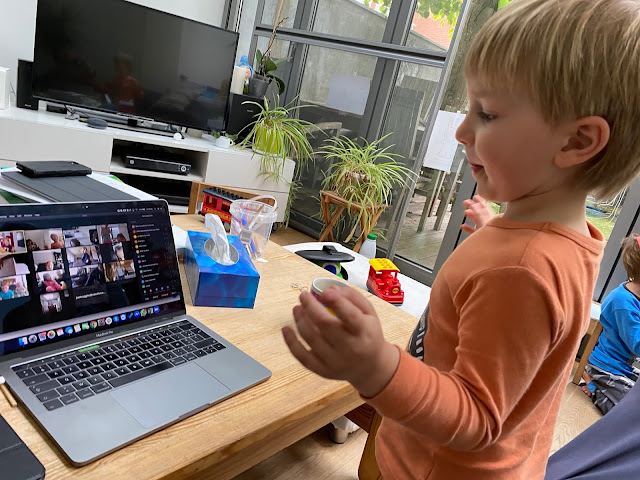 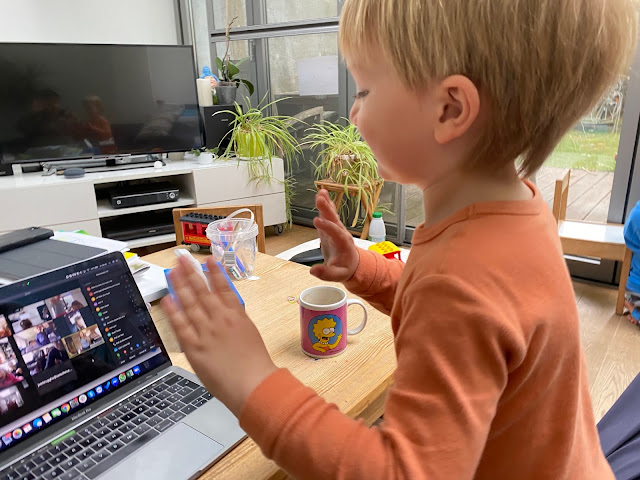 What about the scheme we introduced at the start?

Frankly I gave up a bit with the scheme.  In April I took quite some vacation days and on such a day I do not want to be stuck to an obligation to puzzle at 2PM or make a drawing on 11 AM.

On the days we work,  I've learned that you can't expect the children to follow a scheme on their own.  So I use it rather losely.  Mostly it's a means of communication and setting expectations with Kabouter in the morning: shall we do homework in the morning? Would you like to have me take a break today and spend a little time puzzling with you...well I have mostly meetings in the morning so that'll happen somewhere in the afternoon.   If we make it to the park for a break it'll be before noon or ... I do expect you to do some optional tasks today but you can choose when you do them during the day.

Since we still get up each day at exactly the same hour as always, get dressed and have meals at same times and also have a fruit break in the morning or a cookie break in the afternoon, the big rhythm has remained untouched though and is similar to a real school day.


So we'll do this for another 2 weeks. Then all might change when/if Kabouter has to return to school and his younger brother must still stay at home.  I imagine it will get much harder then for the little boy who has to keep himself busy without his brother and for us who have to keep him entertained without his brother's help.  And I'm not sure whether Kabouter will enjoy school as much if it is accompanied with a load of security measures.  We'll see.  I guess we have to trust, no?

Els said…
So sweet to see them working so nicely. With the 14yo it's not that sweet anymore unfortunately (but very hard work with lots of live lessons, recorded videos, assignments and a lot of self study )
4/5/20 22:20