New Year's Eve in The Netherlands

I hope you've all had a very pleasant New Year with a fancy party or just a cosy evening at home, as you like it the most!

We had the pleasure to spend the evening with very good friends of us in the Hague. While arriving in the late afternoon, we figured that there was a house on fire in one of the neighborhood streets as a thick black smoke came out of the street...but it only turned out to be kids already setting little fires and exploding little bombs hours ahead of midnight! 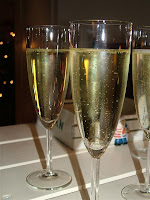 We had a splendid evening with loads of excellent seafood, champagne and fun little kids to play around. It was a very relax evening among friends, exactly as I had expected it to be.

The entire evening there was already fireworks in the neighbourhood going off. So we had to teach the children that this was a fun thing; that it was nothing to be afraid off in order to prepare them for the inferno that would burst loose at midnight. With every boom we enthousiastically cheered "yeaaah fireworks!". We know that in the Netherlands, just about everybody launches heavy fireworks. There are strict regulations, stricter than in Belgium, which results in a Dutch invasion in Belgium in December in any shop that sells fireworks. In Belgium there is also ever more fireworks launched by citizans in the street but it is not yet comparable with what happens in the Netherlands at all.

When the clock had struck 12 and all the wishes and kisses had been exchanged we got out of the door to enjoy the spectacle. People nextdoors were rolling out a few meters of bombthingies in the middle of the road, after which they set the thing on fire. Cars driving by had to simply avoid the fireworks on the street. Those bombthingies were rather popular, other neighbours had them as well later on. 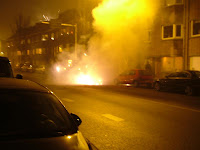 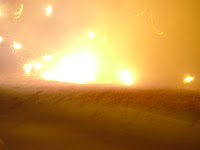 A couple of houses further on the other side, one after the other great professional looking fireworks were launched from a bottle at 2 m in front of them on the sidewalk. Nutters, what if it falls down at the moment of getting launched???? Across the street one big cardboard box of fireworks after another got unloaded from the back of a car. There surely isn't an economic crisis in the Netherlands if they can buy so much fireworks! It was fun but I must really admit that I did not always feel at ease at all. With the smoke in the air and light flashes near and far and sizzling sounds coming by, I sometimes wondered how different this really was from a city getting bombed (thinking back at CNN images of Sarajevo or Bagdad or something). Only people wouldn't be there outside cheering with a glass of champagne in their hand as their reality would be a little different than ours! 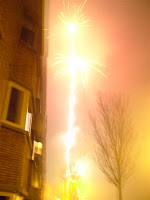 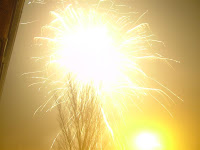 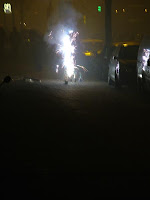 If you don't believe me, also check out Jenn's testimony of her fireworks experience in the Netherlands!

And you know what the biggest wonder was: while some explosions were so loud that I ducked down and lost half of the champagne in my glass, the toddlers in the house slept through it all!

Jenn in Holland said…
It is a wonder to think that the babies can just sleep through it! Andrew did too even though he was inches away from our front window which was a full view to all the wild action!
Fun stories to share though, eh?
3/1/08 21:51

Gudrun said…
Even Wolf slept through it all here, and people were launching things right next door.

Jen said…
Wow! It truly looks like a conflagration. I'm glad you had such a lovely start to the New Year, though. And I love your new profile picture!
4/1/08 03:29

anno said…
Incredible! I guess that's one way to ensure that nobody falls asleep on the sofa before properly greeting the new year! It sounds quite invigorating!
4/1/08 03:57

Wholly Burble said…
I'm glad it all turns out to be fun--I'd be thinking of people blowing their fingers off, setting their house on fire, and having third degree burns LOL.