On Tuesday evening Belgium got a much bigger shock. Our prime minister Yves Leterme went to the king to resign while stating "The federal consensus-model has reached its limits". Pretty scary when a federal prime minister loses faith in the federal model. Our king has not yet accepted the resignation but has started a week-long consultation round. 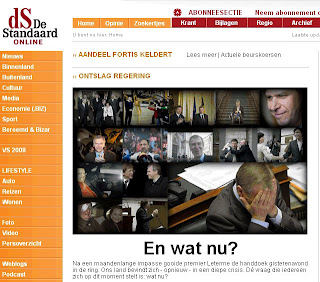 And now what? titles one of the main Flemish newspapers De Standaard. Good question.

How could we end up in this mess? Sure there are people in this country that want to split up Belgium, but this crisis is not about splitting the country or not.

* It's about the centrist political party CD&V joining a kartel with the more radical right-wing nationalistic party N-VA. Even though the NV-A wants to evolve to an independent Flanders, the CD&V only wants a consitutional reform that gives more autonomy to the regions. In the race for the 2007 elections they make bold statements about a state reform.

they'd bring "good governance", "would not step into a government without an agreement for an extensive state reform in the government agreement" , "split BHV with 5 minutes of political courage" etc...

Unrealistic statements that would lead them straight into impossible negotiations and the choice to lead a government without credibility or abandon their own political leader and make the government fall.

* It's about Yves Leterme and other politicians making a career in the regional governments and rising up on the political ladder without any federal experience, without the need to keep the delicate balance between the 2 country parts , being able to make controversial statements that created distrust on the other side of the language border.

* It's about a group of Flemish politicians and citizens so scared to loose their own identity and clinging to something that in reality does not exist anymore: the pure Flemish identity of the villages around Brussels. Brussels is a multicultural city where many languages are spoken but Dutch is surely not the main language. The peripheral is more and more evolving to a Frenchspeaking region despite the official Dutchspeaking statute. Rather than accepting this reality, activist groups enforce the road signs on the ringroad in Brussels to be solely in Dutch because on Flemish territory the roadsigns must be in Dutch according to the law. They want the facilities that are active in those peripheral towns around Brussels with a considerat minority of Frenchspeaking people to fade as a temporary integration measure and not a permanent acquired right.....There's activists that lookup any media event to show up with Flemish flags and wave them in front of the camera's, creating very ambiguous feelings for me when I see the Flemish flag which is a reason I resent them for. The examples given in this article are incidental but shamefully true.

* It's about a generation of "navel-gazers" , thinking that there's no more important problems in the world to tackle but our own regional relationships.

* It's about a generation who mistakenly thinks you can force/prevent a negotiated compromise through deadlines and provocations.

* It's about paranaoia Wallonian politicians not even trying to consider moderate state reform propositions that could rationalise our current state structure. They scream "no" to everything as if they are afraid to gain more autonomy myself. While they give cooperative messages on Flemish tv interviews , they give other views on the Wallonian tv. When the prime minister resigns they all act surprised. How hypocrite can it get?

Can you tell I am slightly disgusted by the current leading politicians?

The irony is that this government did agree about economics, finances etc... All parties in the mean time do agree as well that some reform is necessary! If the CD&V and N-VA wouldn't have created their own deadline for a state reform agreement, they would have been able to govern and spend 4 years of their legislature to work out a consensus about our future state structure. Then the frenchspeaking parties would obviously need to agree with one of the suggested structures at one point. I do believe the Flemish had softened their demands already a lot over the last 13 months.

So what now? They'll work something out even if it is once again a technical temporary government or some temporary legal workaround to organise new elections. But it'll delay all important decisions and operations once again and that was the last thing Belgium needed.

blah said…
You know I KNEW you'd have post on this - as soon as I saw it in the news I thought - E!

I so hope you all can get it together - I bet the whole thing has been stressful !!