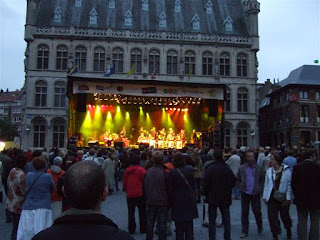 Jo Lemaire at the Grote Markt

We missed the folk edition of Beleuvenissen last week due to our camping trip, but last Friday night we headed downtown again. After a brief walk around on the Grote Markt and Margaretaplein , were respecitivaly Jo Lemaire and Sergio & The Ladies were playing, we headed to the Oude Markt. Jo Lemaire has a magnificent voice but I did not like the brassband that was accompagnying her. And Sergio's duet with his ladies didn't even meet my expectations for an unknown cover band. I surely will see better next week on the Gentse Feesten.
So we headed over to the Oude Markt as De Kreuners would surely make the market swing. We were not the first ones with that idea as the market just got closed off when we entered the entry road and we really had to squeeze ourselves into the crowd. Quite soon people started leaving though, creating some more room to move around. I couldn't blame those who left: although De Kreuners were playing their well-known songs and new single, Walter seemed to be totally uninspired and just doing his job. It really looked like a bunch of successful tv-presentators, tv hosts and producers got back together to sing because a contract obliged them too, but they didn't know to rock anymore.
As De Kreuners aren't really a band you can catch on singing 100% at the perfect pitch with stunning musical voices, neither are their lyrics moving literature. But De Kreuners bring fun, atmosphere, many many hits to sing along. 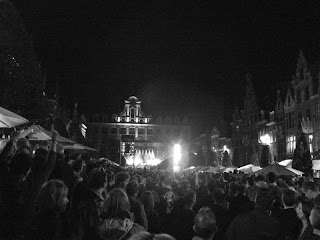 The Oude Markt at Beleuvenissen

I caught myself singing along out loud on songs I had not heard anymore in years, but which had played endlessly 15-20 years ago. Words bubbled up with ease from long forgotten parts in my memory. I saw myself sitting at my desk again with my tapeplayer on while doing my homework. When I was 12 or 13 my sister arranged with my parents that I could go to my first concert ever while she'd take care of me...De Kreuners indeed :p. I was the only one in my class who could go.
And the years afterwards I looked in all popular magazines for posters and pictures of Berre Bergen. Hmm how insane can you be as a teenager :p? (while I am at it, I must also admit having had posters of the long-haired André Aggassi and Matthew Broderick (Ferris Bueller!). Oh gosh, how shamefull).

After a while Walter found his old self, started getting in touch with the public, his stupid jokes came back and he managed to have the crowd sing along loud on most of the hits and to even turn around with their back to the stage for a picture for the back of their next CD. This concert was taped for one of their live DVD's....I'm somehow suspicious that they only needed one hour of material. Anyway, the last part of their concert surely rocked and I am very glad that I didn't leave in the first 15 minutes. 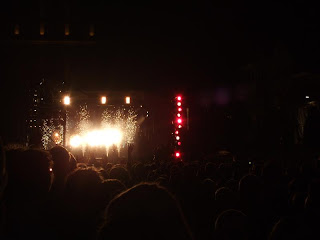