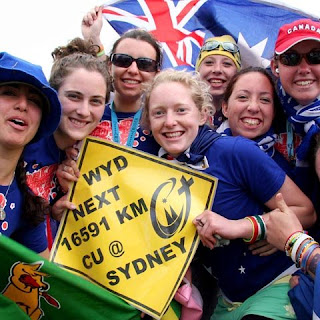 While the World Youth Day 2008 in Sydney is over already and I was reading the different media coverage on the event, my thoughts went back 8 and 3 years frequently over the last days. Some flashbacks and thoughts to share....

When you are regularly getting together with people you've met in Rome 2000 and you know the persons working at the episcopal youth organisation planning the World Youth Day tour for the Flemish delegation, it seems obvious that you go to the next World Youth Day . But when you are already 28, working, in a relationship, it becomes a bit less obvious as well. And yet it takes place in Cologne at 3 hours from where you live. Surely you cannot miss it.

So I joined the Flemish delegation with another 100 of us just for the closing weekend of the World Youth Day in Cologne. In the days before I left, I followed closely all media news on the event from home. It was very frustrating to see how the way journalists approached the pelgrims over and over again: we got to see protesters distributing condoms, they questioned youth about the pope and his visions on gay marriage, female priests, etc... This is getting so old. You either agree , partially agree or disagree with the Vatican and for western Europeans it's usually the latter. But it's so frustrating that focus in the media always goes to the same 5 or something controversial issues when covering the catholic religion. Yeah sure, condoms, ....that nicely brings the essence of the Christian faith. That surely is what the World Youth Days are all about. Grrr what a narrow-minded approach in its own.

We got on the busses on Friday afternoon on a grey cold August day and drove to Cologne. As we only joined for the last 3 days (2 nights) we were hosted in a schoolbuilding unlike the majority of the Flemish delegation who was staying in host families in a parish at the edge of Cologne. As a matter of fact, the majority of all pelgrims at the World Youth Day was staying with German families. I find that very impressive and doubt somehow that the Belgians would manage/be willing to do so. Thumbs up for the German hospitality!

In contrast with Rome where the public life had completely disappeared , Cologne still seemed to continue its day-to-day activities with the pelgrims mingling in between. The traditional Road of the Cross on Friday evening was taking place in the neighbourhood where we staying together with other groups hosted in neighbouring parishes. While Germans were glancing at us from behind every window, we walked in a slow solemn march through the city towards a park for a short celebration. I felt their eyes peaking at my back while we were staring closely in the candle we were holding and shielding from the drippling rain and while were trying to sing our songs a little more firmly.

This morning we had celebrated a last Eucharist with the hosting parish and all the host families. Even though I had not been in one of them, I could feel the warmth that had surrounded them all week. What a great community.

After the long goodbyes we all gathered in busses to drive to our assigned parking lot...in the middle of nowhere in the fields out of Cologne. On the highways we saw bus karavans going in all directions but luckily no traffic jams got generated. From the parking lot we started our hike towards Mariënfield where the night wake would be held by Pope Benedict XVI. Some other thousand of pelgrims from all nationalities had to leave from the same parking lot and we all hiked in long rows of singing, chatting, ...people through the fields. From across the fields and trees we could see other lines of people waving flags , praying out loud, ... coming nearer to us until roads merged in bigger and bigger groups. 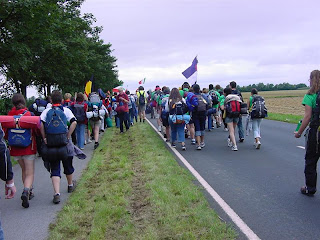 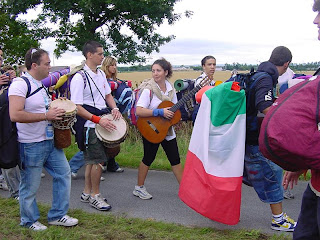 When we arrived at Marienfield at our "entry gate", we saw people from all sides arriving and filling the location. Flags everywhere, all going to the same central point. Somehow I wondered if the arrival of a Crusade would have looked like that. (or any other big invading army). But this army was singing, laughing, having fun.

We installed ourselves in our designated sector and I find a little big of space to unroll my sleeping bag next to a Mexican (who still sends me an e-mail now and then of which I don't understand a single word), a group pelgrims from Strasbourg France and an American family. Later on I heard that each pelgrim had 0.7 square meter....I had exactly the room for one sleeping bag while using my backpack as pillow. If you wanted to go somewhere, you had to jump from sleeping bag to sleeping back. So at each walkway, you saw people taking off their shoes and tiptoeing on their socks over the other people's belongings gently. It was noted in the press afterwards that this clearly was not a rock concert crowd as they had never seen youngsters being so respectfull for each other. (I read similar press comments about Sydney this year: the city would have first been a bit reserved or even hostile against this invasion of pelgrims but slowly the friendly happy open pelgrims would have won the sceptic's heart...I am not surprised.)

The crowd didn't overwhelm me as much as in Rome: first of all I had expected it to be huge, secondly it was less than half the crowd as in Rome (800000 people slept there at night, the closing Eucharist was attended by 1.2 million people).
However this time my pelgrimage was not preceded by an exhausting week, so I could pay much more attention to the service, the texts , the vigil, etc (in Rome I had dozed off by the end of the evening and was woken up by the fireworks at midnight :p). This time I truly was curious to "meet" the brand new pope Benedict XVI. As was the habit with his predecessor, the crowd started scanding his name upon his arrival: "Beneditto". He waved it away, but still seemed to enjoy it very much. Whenever he mentioned the previous pope John-Paul II he got a huge applause...and I started to have a feeling that he mentioned John-Paul II quite often (on purpose?). Other than that he didn't allow much spontaneity in his teachings. They all seemed well prepared and structured and whenever the crowd interrupted something he sayd by applause or scanding or so...he simply paused until we were quiet again and then continued where he had left off. No spontaneous jokes in between....only heavy theological explanations. Although good, ...it was heavy to listen to. 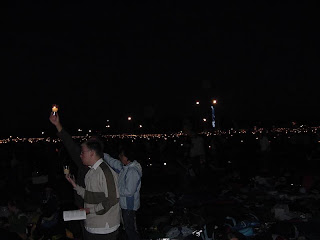 I remember the weather predictions to be quite desastrous for the weekend: cold and rainy. I was equipped with a big plastic to use as a shield if necessary. But somehow the clouds remained in a big circle around Marienfield with an opening above ourselves. While that weekend there were inondations in Belgium (border at 30 min drive from Marienfield!)....we stayed dry and even got some sunshine. I have pictures of the clouded sky making a big curve around us with a nice blue whole above us......I don't know what to think about that phenomenon to be honest, but it sure struck me. 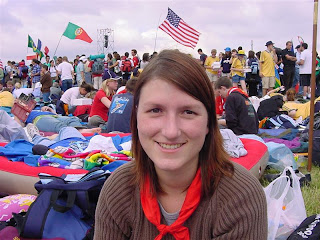 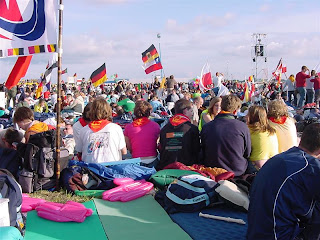 Rome 2000 was overwhelming and I remember mainly the friendships I made and the international meetings with the other pelgrims. Cologne 2005 had much more focus on the content for me. I am really greatful to have been able to participate twice. And from now on I follow the current participants with all my heart and thoughts during the next World Youth Days. I hope it is as powerful for them as it was for me.

Jen said…
Thanks so much for sharing these deep experiences of your youth! It really gives an insight to these activities and conferences.
25/7/08 14:20