Jenn in Holland announced him first,
Lies saw him already although vaguely, her children got some letters,
Kate really got a good view,

but last week I got to phone with Zwarte Piet! I must say I was a bit confused when a phonecall to my sister got anwered by a very young sounding Piet who told me that Sinterklaas had proclaimed that all children have been good this year. For a moment I thought I was talking to Stef but nope, the voice confirmed to me that he was Zwarte Piet.

So I wasn't too surprised that I saw Him coming by when leaving the public library. 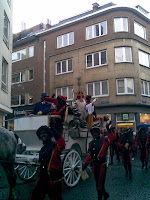 But the Holy Man still keeps busy at his high age as he had visited my parents that same evening and had left them already some presents for Stef. Lucky boy 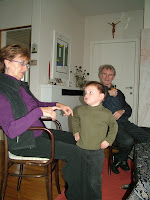 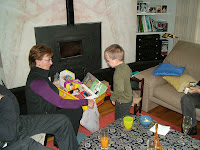 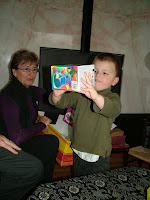