You have not heard me complain about the summer yet. That's because it's actually quite nice: not too hot (or never long) , not too wet and cold ( or never long), .... In the beginning of July the best days were always on working days but now it just goes up and down between 20 and 30 and some showers and sunny days. Nothing exceptionall, just generally nice.

Yesterday was very hot. the 15th of August is traditionally a family BBQ at Jan's family and sometimes we need to sit in a tent for shelter against the rain & cold, yesterday we were in the tent to look for shade. But since the tent also prevented all wind, we all ended up sitting in a long row in the small patch of shade along the trees. Quite a funny sight.

So this morning I ventured out to church, despite the cloudy sky in a T-shirt and some shorts. Brrrrrrr. I looked like a defeathered chicken. Our daydreaming yesterday about cool dives had evaporated. So we ended up checking out a bike tour in the woods around Leuven. Last week we had been biking in Limburg with our in-laws and it was very very nice. I've been in awe in the past with the nice biking network available there...as well as elsewhere in Flanders. Over the last year we had gotten a few of the cycling network maps and with those and the fietsnet.be site we mapped out a nice little tour, smaller than last weeks so it should be nice and relax.

Just when we were about to leave ready with long pants on (goosebumps, remember), the sun came out bright and shiny. Ok, give me a minute, let me change back into my shorts.
Sunglasses: check, T-shirt : check and shorts: check we were off.


The woods were lovely but the roads were not paved. After a series of bumps, branches and rocks on the road my arms were more tired than my legs. Wow, this tour wasn't going to be as smooth as last week's! 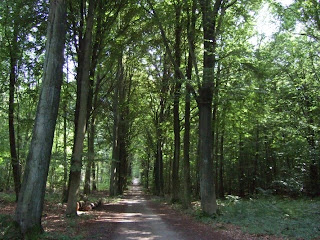 And then only the cobblestone patches started....bbbbbaaaaadddddddllly ppppaaavvved ccccobbbleeestoone. I think we did part of the Via Appia as the road surely wasn't maintained in a long time anymore. And I started feeling whiney and longing for nice concrete patches while I wondered if my bladder muscle would last on all the bumps. Oh don't get me wrong....I love the Belgian countryside cobblestone roads, but I now know I am not made for cycling on them. Heads of for the cyclers in the Hell of the North!!
At one point there was a board next to the path: "warning, road in batch shape". No fucking way, really? So cool you tell me, now can you give me an alternative, please? 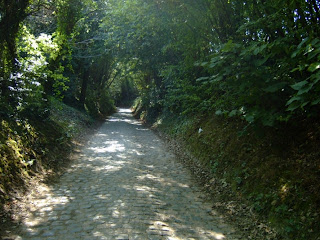 (a well maintained cobblestone road...unlike some in the forrest) 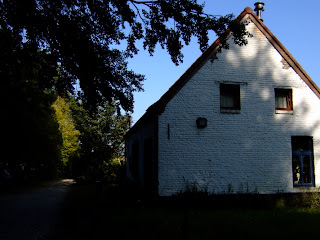 a house at the edge of the woods 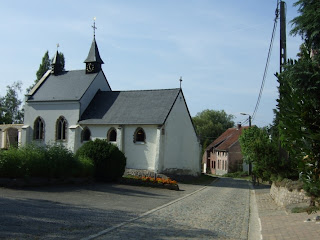 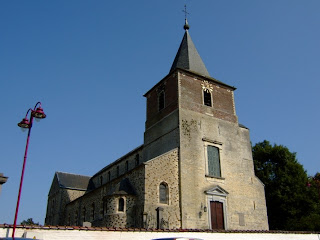 Fortunately after the woods we ended up near corn fields and villages...which of course have a pub on the main market square with a terrace out to lavish the many cyclers coming by. All refreshed I made it in one piece home...although my shoulders and my ass...ough.

anno said…
Maybe those trails were hell to ride, but from here it looks like enough beauty to make up for the pain: totally charming
17/8/09 02:48

Korie said…
Ugh, the cobblestone roads are the worst! It used to bother my butt the worst but now it does make my legs really shaky.
17/8/09 15:37