Life is tough in Belgium during the summer. Each weekend you miss out on fabulous music festivals since there's so many scheduled at the same time :p.

So after Beleuvenissen folk, I slept in and then I jumped on the shuttle bus with some friends to Werchter, the nearby festival village (hosting Rock Werchter, TW Classic, indivicual concerts such as Madonna, The Rolling Stones, ...  and home of StageCo the world's best stage building company, making eg U2's famous claw stage) .

Saturday was TW Classic, the one day festival hosting veteran acts and young Belgian acts. As a result the average generation on the field is no longer one of dominantly students, but a nice mix enjoying the day out in a relax atmosphere.  Fortunately the grey clouds were only threatening a bit but remained dry and opening up regularly to wrap us with warm sunshine.

We arrived just at the end of Selah Sue's opening act and then were hosted by some more Belgian/Latin/jazz sounds from Gabriel Rios. 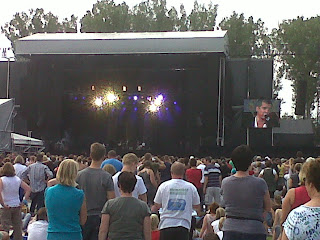 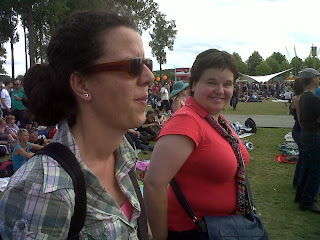 I had never heard of The Faces before and since they were featuring Mick Hucknall, I had "Simply Red" music in my mind when they started but to my pleasant surprise The Faces bring a lot more good solid rock.  It took me all concert to figure out why the guitarist had such a very typical and familiar rock face...dugh, Ron Wood, that's why :p. 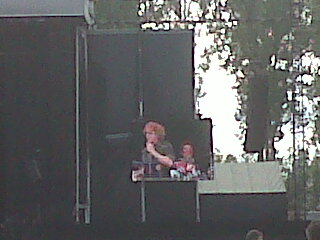 When James Blunt got on stage I expected a dull whiney/ballad/boring intermezzo in the afternoon and I settled down in the sun with the newspaper. But somehow his young and genuine enthousiasm kept my attention and "You're beautiful" sounds much better live than when you hear it for the 10000th time on the radio.  He even was rebellious enough to ignore the 'no crowdsurfing' rule and had a go on top of the crowd for a while and a bit later he was dancing on his piano. 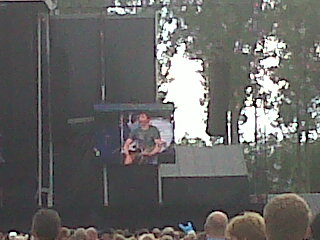 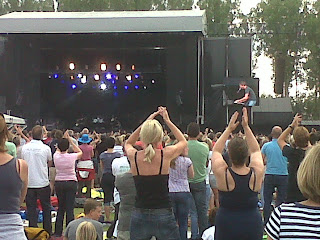 Ha, but then things really got started.  Within one minute with the Simple Minds on stage, everybody was clapping along.  Jim, on his birthday, still can do it, although it was not the best I've ever see them do. Maybe it was still too sunny and relax outside, never seen them in daylight before. Nevertheless it is always a joy to see them perform. 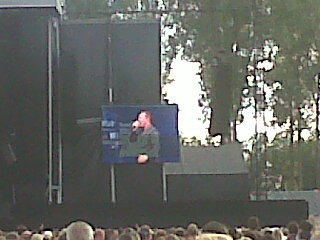 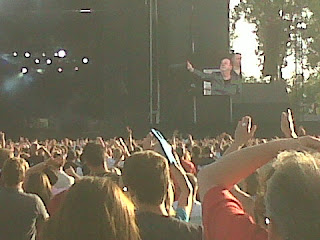 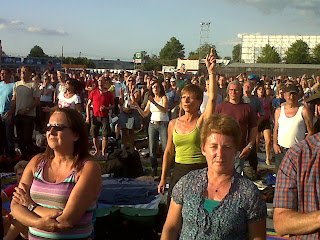 I knew Texas and I love their songs but the spontaneous charisma of Charlene Spiteri was a revelation to me. Gosh, I like that woman immediately....would she want to be my friend on FB so we can have a fun chat and I can poke her now and then and she'd give me a snappy but fun remark for that? 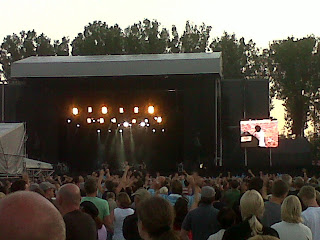 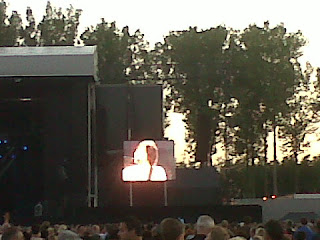 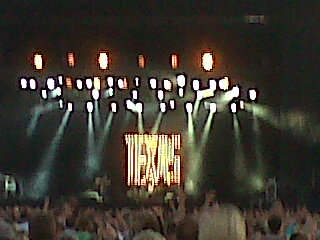 Top of the bill was Bryan Adams.  A lot more strict rock, loud guitars and bright black/white visuals than I remembered his pop (?) hits in the nineties.  Maybe I was already too tired and a bit cold, but somehow the whole set stroke me as a distant and not reaching out as if I was watching a video clip. The moment he invited a girl on stage was the only exception but during the rest of the set there was hardly any interaction with the public. All newspaper reviews were very positive though, so blame it on me, but I like the Simple Mind's sing along "la la la " more or Texas's impression of Elvis Presley.  I couldn't help but notice that a bit part of the crowd was already leaving before the end, something which was not the case last time I was at TW Classic, watching The Police.
Email Post
Labels: Music

Virtualsprite said…
What fun! We rarely get festivals like that where I live in Wisconsin, and when we do it's mostly Country music. (Not my cup of tea.) I love Simple Minds, though, and I hadn't thought of them in ages! It's good to know they're still around.
13/7/11 22:47

Goofball said…
@virtualsprite: country is not my cup of tea either but fortunately it is very rare in Belgium :)


Yeah, the Simple Minds are alive and kicking and have a fairly big fanbase in Belgium. I think they come across each year. Last time I saw them was in 2009 on Suikerrock, another city music festival at the end of July at 20kms of Leuven. That concert was better than this one, I thought. Actually, I just read that they could not be scheduled later on the evening last Saturday as they were headlining another (much smaller) music festival elsewhere in Belgium on the same evening :).
13/7/11 23:20