Last year Maes & Studio Brussel launched the container "music box" concerts:  in several Belgian cities in September & October they announce that the Music Box is arriving. They also have a list of Belgian top acts that will perform. ....but you never know who is in the container until it opens. So in fact they are all surprise concerts.  Free surprise concerts , live on the radio, from top bands.
Last year there was never a date or location that worked out for us, but last Friday the Music box was in a nearby city , in Mechelen.  After a very too budy work week, and still more left to catch up & prepare for the start of the next week, it felt great to escape for a moment.
We hit some traffic jam and just barely made it to the square to see the container opening....so cool & exciting to stand and wait and guess.   Triggerfinger was last week in the music box so they dropped from the list of candicates. Jan was already in Mechelen that afternoon and had seen they were setting up & soundchecking for guitars...so we ruled out Ozark Henry already from our guesses. I was hoping a bit for Hooverphonic.
At exactly 8 PM, the container side slowly opened up and 3 men with guitars walked to the front ()....It was Customs in the box. yeaaay, never seen them yet before and since my﻿ post on them, they've scored some more fun hits.
And so we enjoyed the free concert on the square with some good beer of course ;). Thank you Maes & Studio Brussel! 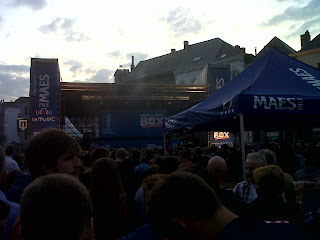 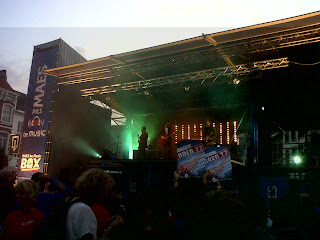 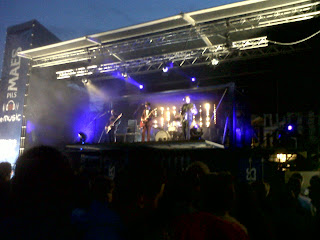 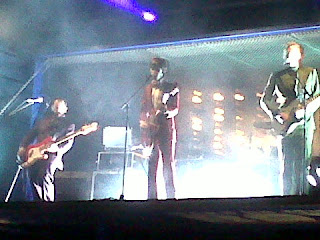