While Jan and the midwife helped me wrap up and warm up and get on the bed, the anesthetist arrived and managed to apply an epidural in between 2 contractions when my shaking had finally stopped.

I was still cursing at the quit painful needles when the midwife stated abruptly "Wow, you just had a big contraction, you didn't feel that right?"
"huh? what? now?"
"yes, you are in a contraction at the moment"
"What do you mean, I had a contraction, huh, no I don't feel anything"
"yes you had a contraction, look at this graph"  pointing at a peak with her finger.

In fact I could not feel a thing to such a degree that it was creepy.  I can totally see how epidurals freak out people.  I could not move my legs or feel anything below my hips: the anesthetist had just effectively paralyzed me.  Apparently that strong effect would wear off, at least so I hoped. For a moment the thought crossed my mind "what if something went wrong and my feeling doesn't return"?

With the epidural, peace and quiet had entered the room and both Jan and I could recuperate a bit from the previous +24h of contractions.  The graph next to me plotted my contractions dutifully and as of now you could hear this type of conversations in our room
"ha look at that one, that one was big...look, those before were only 40%  but now it was a full 80%"
"wow, Jan, look, I just hit a 90%"
The entire labour process had reduced itself now in reading a graph to check that my contractions were still ongoing.  We tried to rest and snooze a bit but were regularly interrupted by the midwife who was checking in upon us.

"Do you mind if they can measure as well, ...they are in training"  she asked once when she arrived with 2 midwive students.   Ha, the disadvantage of being in one of Belgium's biggest hospitals is the fact that you constantly run into nurses/doctors/specialists in training.
"Oh sure, go ahead" I said without much hesitation.  Hey, the more people measure my cervix dilation, the merrier. Why don't we all have a look and feel inside there? Anyone else who wants to have a try? Bring on the party!  No seriously, don't we all want to have medical practitioners with much practical experience rather than book experience?  So why refuse these students to practise on me while I was totally pain free at the moment? And as a result, I could listen and witness the students feeling...thinking...remaining silent while their colleague was feeling after which they all could bring forward their measurement and I could listen why they had different results/ had to retry and what they had to look for.  Hour after hour however the conclusion remained the same :  4 cm.   Ugh, this was going to be a long night/morning...

In the mean time I was also laying on my side with a leg lifted higher in a brace as apparently our little men was facing forward rather than backward and they hoped he'd still take the initiative to turn himself. Hence probably the lack of progress, as you can't expect these little ones/your own body to multitask too much: descending , turning, ...

Early in the morning I got a baxter to enhance the contractions.  All of a sudden the graph showed a lot of 100%'s ...one peak after another. Fortunately I had also already received my first refill of the epidural!  Jan and I stared a bit in amazement to all the activity but then went back to snoozing away, trying to catch all the rest we could still catch.  However all of a sudden I had dilated up to 8 cm in an hour, so we quickly calculated that we'd hold our little boy in our arms by 9 - 10 AM. Wooohooooo.

At 8 AM our snoozing got abruptly interrupted by a medical team marching in. In a waze, I stared to the 10 white coats at my feet who all stared and smiled awkwardly back at me.
"Hello, I'm doctor Somethingso-or-so, I am in charge of this team and we are starting our shift. We'll take care of you in the next hours" .
I threw back a vague sleepy smile and cursed as I had no interest to see our intimate peace and quiet in the room interrupted in order to salute the new troops on roll-call. I'm sure it was done with the best intentions but I had no need for this interruption. In the hall-way I could hear the increased level of activity with sounds: people running around, a woman next door where audibly the labour process progressed quickly and were rewarded with a crying baby, ... At the same time the frequence of the midwife checking in on us reduced....we managed to nap for an hour.
Clearly we weren't going to make our "deadline of 9-10 AM" . Instead we were stuck again at 8cm stagnation while the dosis of the baxter got increased and increased and my little graph was basically non-stop peaking at 100% now.   But the good news was that our little boy had turned itself around and was now nicely positioned in pole-position to advance downward.

By noon, I had already finished 1.5 box of cereal bars.  For all future daddies who might ever read this: don't mock your partner if she's packing loads of snacks to eat in the delivery room!  For all future mommies:  you need plenty of small energy snacks!  Even when resting a bit with an epidural, your body is working very very hard and I was often hungry.

In the mean time my epidural refill was empty too and my senses were clearly coming back.  But since I finally had progressed again , the medical staff wasn't going to give me another refill.  So it looked like I was going to be pushing quite soon without any pain medication.
"We'll be back in half an hour, by then we estimate you'll be ready to push"
Rationally I was happy and relieved that I wasn't going to push with an epidural since I knew I'd be able to rely on my instincts, driven by pain, to do the right thing whereas with an epidural you need to push "upon instructions".

pain sure was coming back.

I managed another 15 minutes when I ordered Jan to ring the midwife to come. I was NOT going to last that long anymore.  I was going to push!! Fortunately someone arrived quite quickly and I was told how to start pushing while they'd alert the gynecologist on duty that I was ready.

"Ok, when you feel a contraction coming, now you have...."
"WRAOWRLLL GRRR  AAAU"
"Are you having a contraction?"
"WWAAAAA   yessssssssss"  [ugh, don't ask the obvious]

They insisted that I pushed while pulling my knees and holding my breath, while I had learned from both my physiotherapist and yoga instructor how to potentially breath out during the pushing extractions.  In my mind that seemed much more logic & natural in one big releasing flow downwards.   Much to my frustration they corrected me when I released my breath and they insisted that I had to hold my breath. Argh, old school midwives.  But in the midst of pushing contractions, it's not the moment anymore to discuss much.  So I held my breath for as long as I could but usually released before they wanted and when Jan held my knees as instructed, his hand got quickly slapped away.

There was a lot going on in the other rooms as well and sometimes a nurse came in and discussed something with them at the door.  Well while I can understand that for them it was a daily job to deliver multiple babies, I was rather in the middle of the most important event of my life so far so I would have appreciated it if they kept focussing a bit on the job.
"AAAWRRRLAAAAAAAAH" (while I quickly exhaled since they were not looking anyway)
"Keep your breath, you must keep your breath"  (ha, of course they did notice that)

For over a half hour I made no progress at all and I looked at the clock in dispair in between 2 contractions. When the gynecologist came in, he stated after one glance at me "I'll make a cut"
"no please noo" I grumbled but I had nothing to say in this decision.

They tried to explain and instruct me to push in a different direction...which apparently I did after a while when concentrating on the constipation feeling it all started with.  Jan encouraged me that whatever I did differently, they truly saw the baby move  downward now.

So I tried...and I tried...
I had no more strength, I was out of breath,  the contractions keep coming while the baby wasn't there yet.


And I pushed with all my last strength
And I pushed once again
And he was there  (at 1.20) ...
And I was crying while I heard him crying and was handed him on my breast... 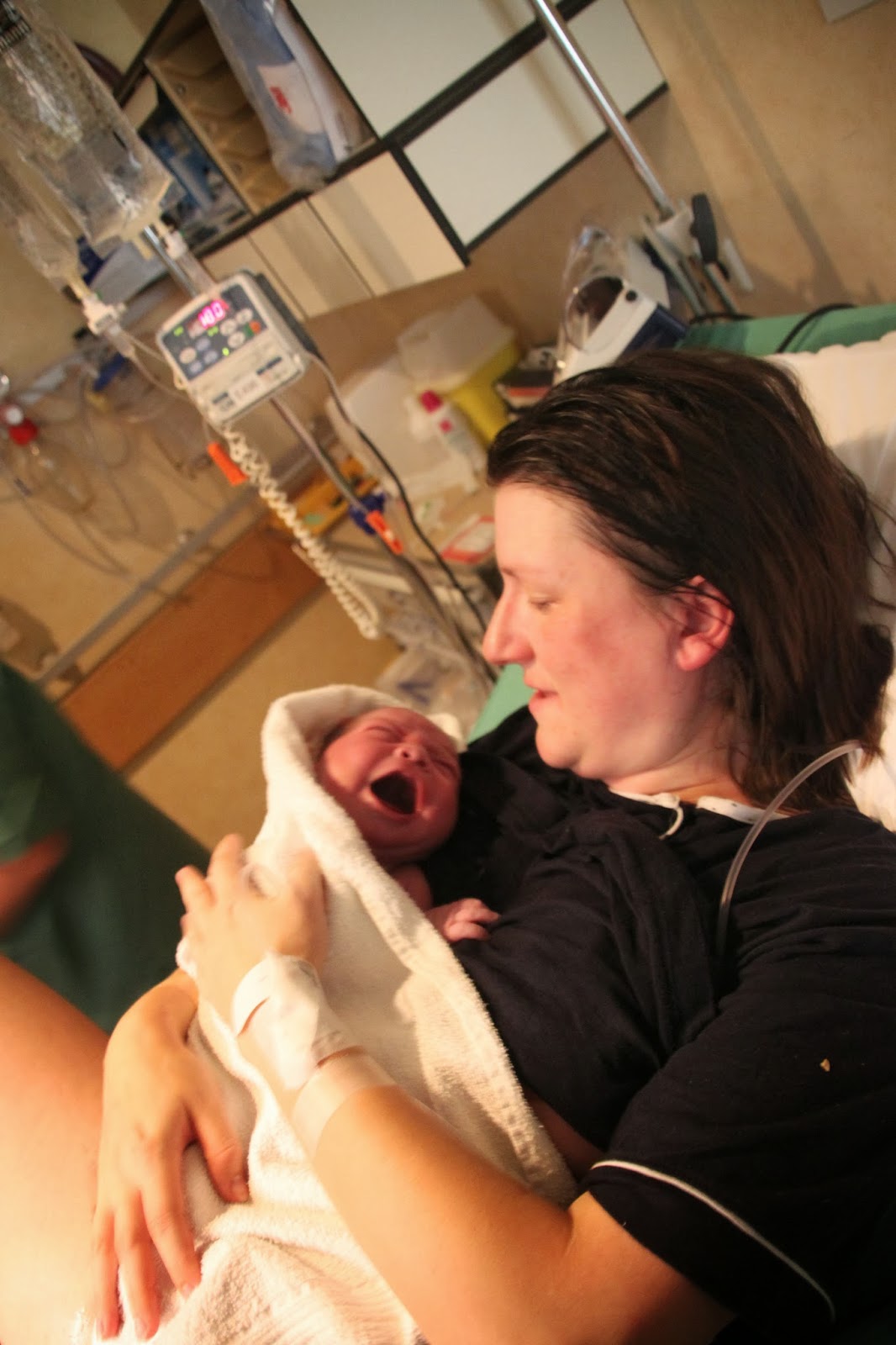 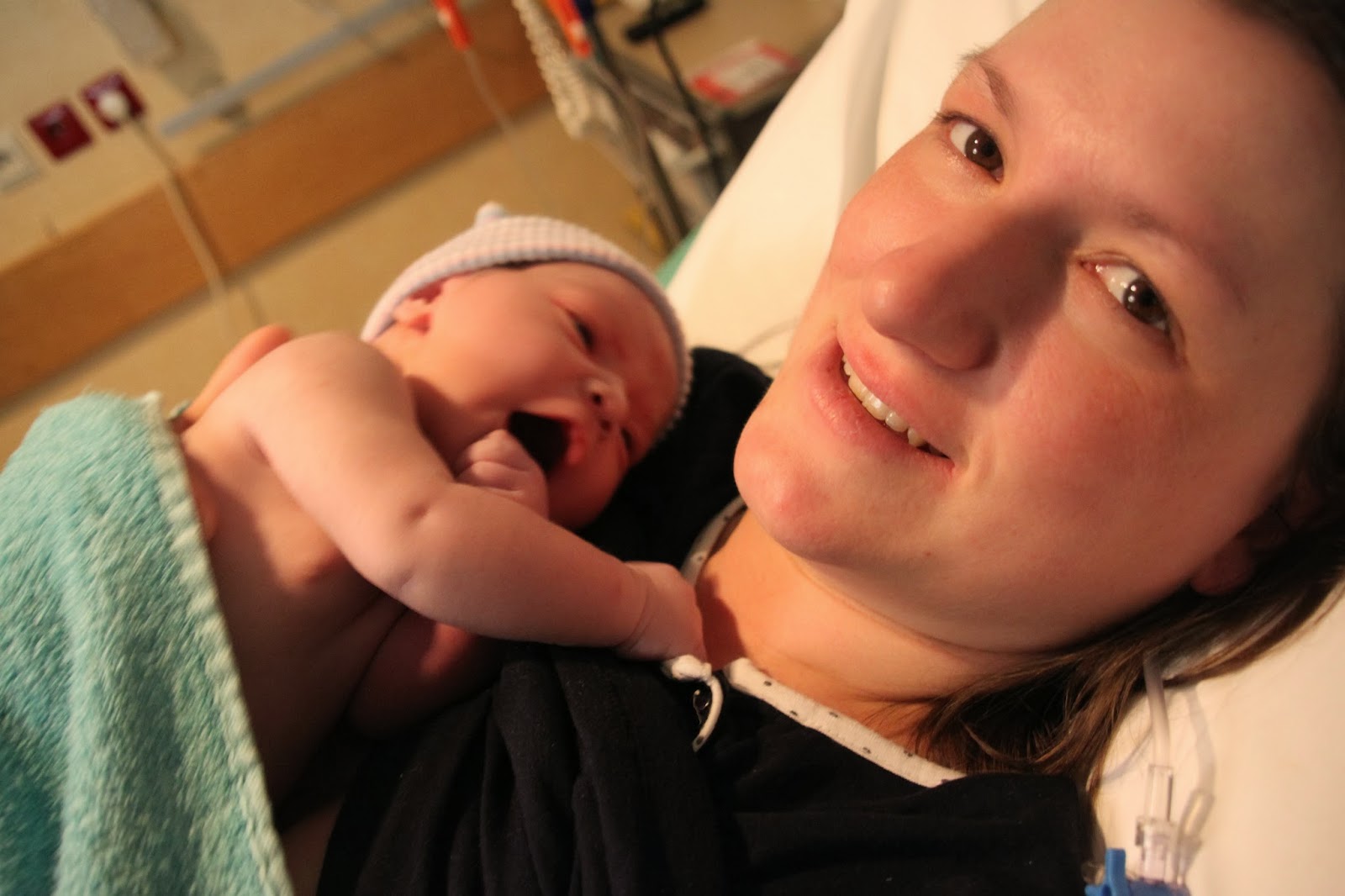