During our "vacation week" in the Ardennes, I took the children to Forestia.  This animal park and adventure park is located near Theux.  In fact, it is very closeby "Le Monde Sauvage Safari park" which we have visited in the past. However, since our long traffic jam to get into Le Monde Sauvage Safari park on a sunny day, I'm not too much a fan to return there anymore in a top season. Fortunately Forestia seemed a bit less busy and first has a big parking lot before you go and pay for your entrance at the entrance gates. That makes way more sense and avoids cars standing in kms in line to pay entrance!

Forestia is not a safari park or zoo with exotic animals. Its animal park features forest animals that live in a European-like climate: lots of different types of deer, boars, wolves, black bears, bizons, lama's ... It stretches out on 2 hillsides of a little valley in the woods, so the walking tour gives you pretty steep climbs and descents.  It took us 90 minutes to complete the tour and I've been puffing at moments to push up the stroller. The website states that the park is less accessible for wheelchairs for this particular reason.  Obviously once we conquered the slope, the children offered to push the stroller themselves. 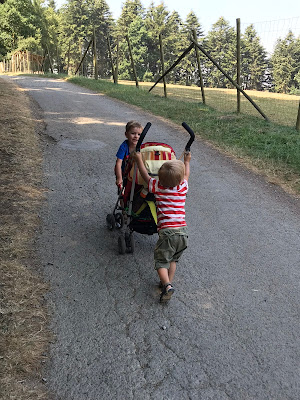 Since a lot of the animals are in the woods, the trails are most of the time in the shade which was very welcoming in this hot summer!

At your entrance you are asked whether you want to buy some animal food.  The bags are priced 1 or 2 euro's so you tend to buy some food in an impulse.  I thought it was a bit commercial and strange for an animal park to stimulate animal feeding.  I figure they do this to avoid that people would feed the animals anything less suitable.  So at each large animal zone, signs will indicate - and so do the icons on your little park map - whether you can feed this particular animal or not. Most deer and lama's could be fed.

Obviously Beertje took the bag and dropped it all over the trail right at the entrance gate, so first thing after arrival, we were all on our knees trying to pick up and rebag the bought food and clean up our mess.  Later on we had to do real effort to spend all of the food, so a bag of 1 euro would have been just fine instead of the double size.

The children were first a big hesitant to feed and Beertje didn't really get the concept of keeping his hand with food open instead of making a fist...but in the end it gave a lot of giggling and "more more" "once more" and a lot of filthy hands.  Feeding the animals is not an activity for people with mysophobia: all these animals extensively lick your hands and your hands look very filthy afterwards!

Lots of types of deer

Given the heat, a lot of the animals were sleeping further in the shade of some trees, but there were always some curious ones that approached the fence to greet us. 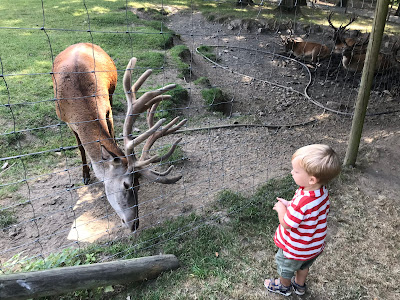 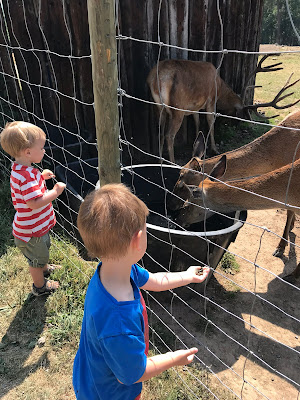 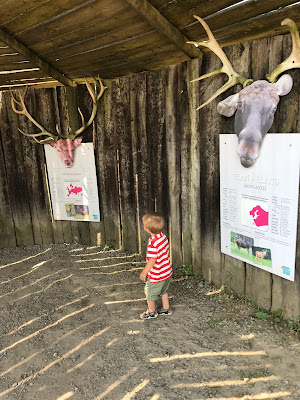 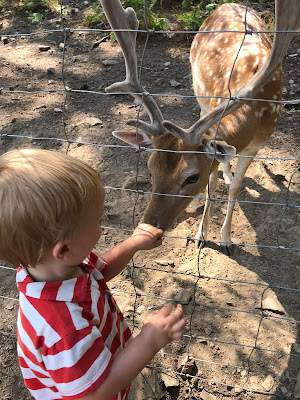 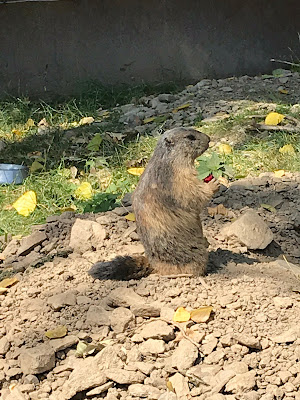 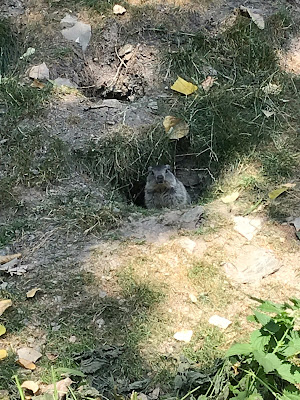 In the center of the animal park is a little valley with a tiny stream. That valley area is dedicated to a large bear zone. We only noticed 2 sleeping bears. I'm not sure if there were more, because they sure have a lot of space to roam around and hide. 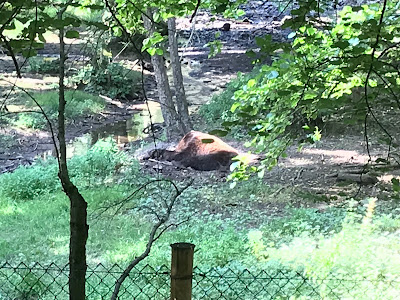 Observing the wolves in a silent zone 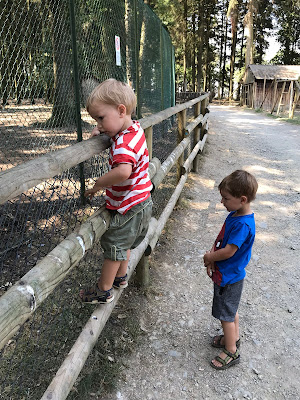 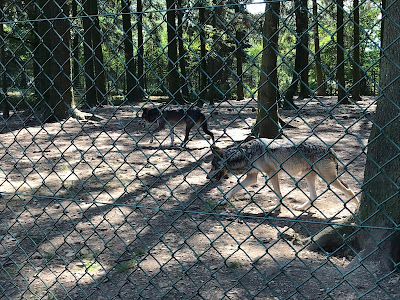 All lama's were quite eager to get food, exept for 2 that were too busy with other romantic activities. 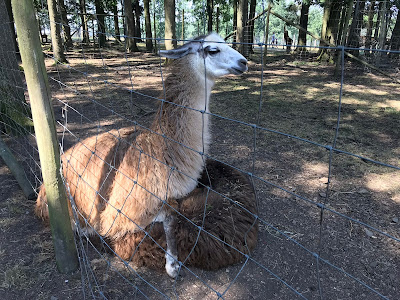 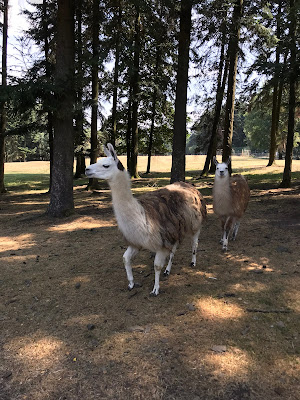 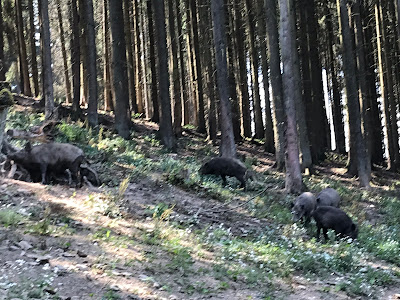 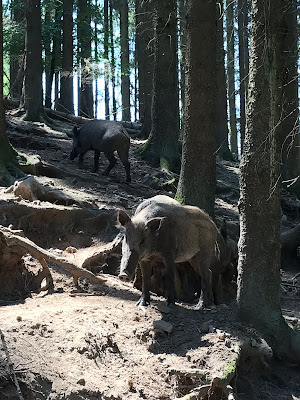 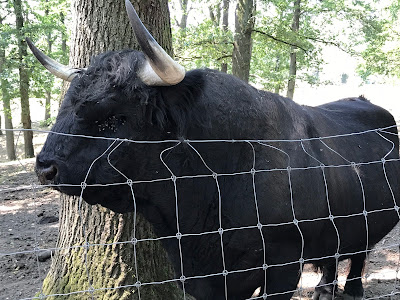 Apart from the animal park, there is a 2nd large "adventure area" which requires a supplementary entrance fee and boasts a lot of rope challenges.  Although their website claims to have a little trail for 2year olds to climb and one for 4 year olds, I didn't think this would be very interesting for the children, so we didn't go to that part of Forestia. We limited our visit to the Animal park.

After our long walk through the park, we had a nice lunch at the terrace of the cosy Forest Bar, after which the children played a bit at the playground. I think the change after all the walking was welcoming to them. There's only so much deer that can keep you interested. 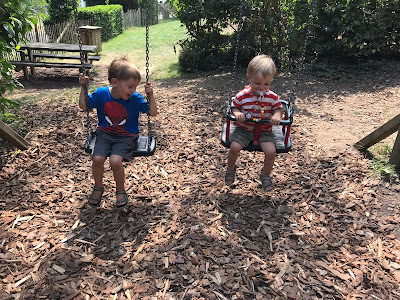 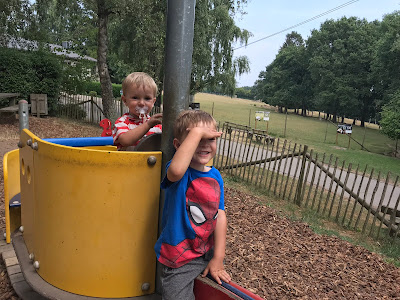 We enjoyed our visit, but I don't think I'd consider a subscription to this park to visit it more than once a year. The prices are comparable to a zoo, but a real zoo with more spectacular animals thrills the children more.
Email Post
Labels: Fun activities Ostbelgien Canton de l'Est