The queen of the stinkerkes 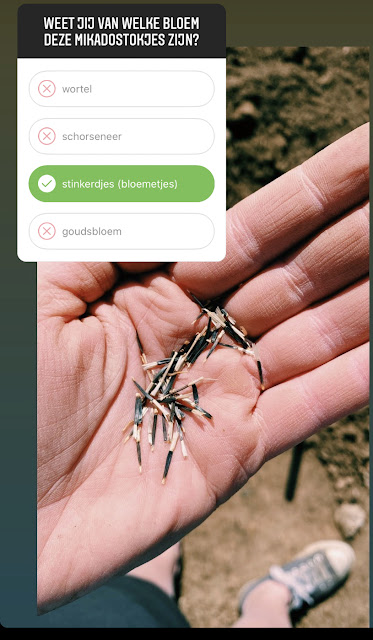 Just an hour ago I came across this post on instagram...I recognised the seeds in an instant without the slightest doubt and it brought back so many forgotten memories.

As soon as I was 7 (?? ok I'm guessing here) my dad took me around the garden and showed me the faded flowers all around.  He taught me how to pluck the old flowers, dry the seeds and helped me the first years to saw the new plans and get the planted in the right moment. After 2 years or so, it became my sole responsibility.  I was the master of the marigolds that were found in all corners of our big garden.

In September/October we had to pick the old flowers and brought them in the basement in large boxes where we spread them out on newspapers.  It was important to spread them sufficiently and turn them a few times in the early days to ensure the moist got out and avoid mold coming in.  If the flowers were old enough you could break them up right away into these micado seeds.

In spring it was time to gather some old plastic transparent containers stashed away in the corners of the basement. I filled them with a few cms of fresh soil and scattered the mass of seeds across the dozen of boxes.  Each of them were put on all the windowsills of the kitchen and living room.  From there we could see the little plans break out of their little seeds while doing the dishes. The tiny little twin leaves pop-up searching the light and a tiny white root dug deeper.  The advantage of having all the plants in the middle of our daily household is that we'd never forget to water them.

The next task was a bit more work: when they grew bigger I had to transfer them in many little plastic posts per 3-4y.  These were moved to the garage or the terrace outside which made it also a lot more work to water.

At the start of the summer the hard work was complete however and I could dig all over the garden little holes to plant my yellow and orange gold flowers.  Hundreds of them in little clusters everywhere.  They took in full summer 22 buckets off pumped water to keep them happy.   But they were happy because I was the queen of the "stinkerkes".   Until they faded again when summer retreated and it was time to collect the old flowers. The  circle was rounded...the seeds could get harvested and rest for the winter in the basement.

I don't think there are marigolds anymore in my mother's garden. They went out of fashion during my adolescence. Right now I feel like buying some for my garden. Maybe I can show Kabouter how to pluck the dead flowers in autumn and show him the seeds inside.  Maybe