19 months after the first edition, Jan's work had organised a 2nd edition of Kids@work.  In the office building, all families with children could come and visit again and discover some childfriendly activities.

Unfortunately the weather was rather whimsical, cold and wet at the end of April when this took place, so the jumping castle outside wasn't used very much. 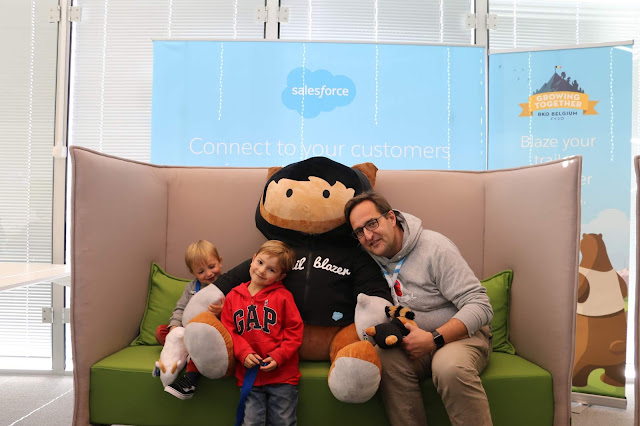 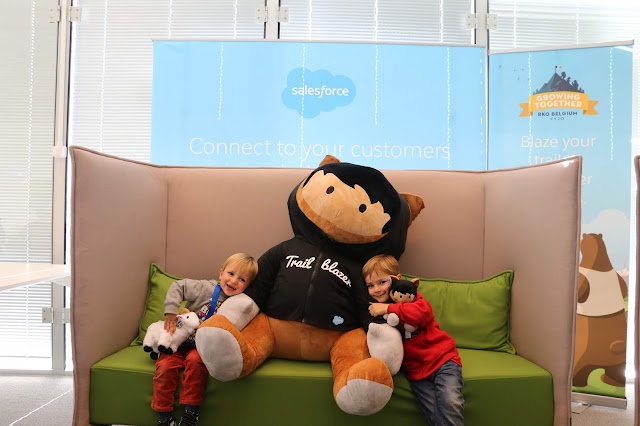 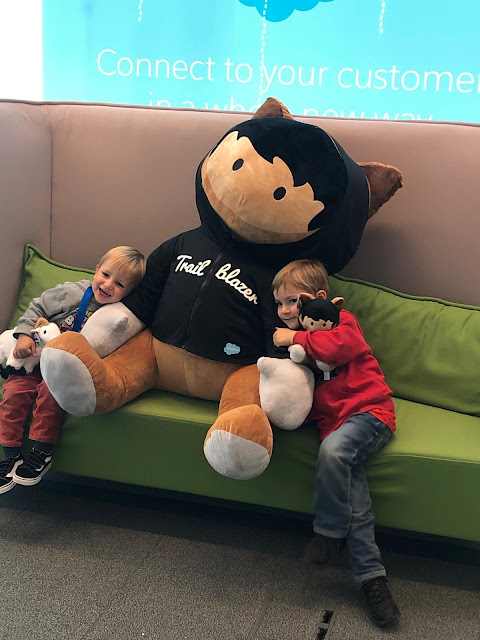 All children who knew the secret code (which Kabouter had been repeating non-stop during the 15 minute drive) were welcomed in the office and received a lanyard with their nametag on...or a "boss chain" as they tend to name those.   They had already often played with some of Jans lanyards at home so they were sooooo proud to have their proper lanyards with their name! Now they also went to work and they were a boss too!

We were one of the first arrivals and there weren't as many simple "play corners" with toys as previous edition so the little ones were a bit lost at first. Especially Kabouter remembered last time very well and kept asking where the toys were. However everyone attending brought some 2nd hand clothes and toys to donate to a family support charity organisation and hence that donation corner quickly became a very popular spot for the little ones to explore in all the donated toys :D. Additional bonus: it was next to the table full of sweets and snacks and drinks. I don't want to know how much candy Beertje has eaten that afternoon but my calorie intake surely was way too high. 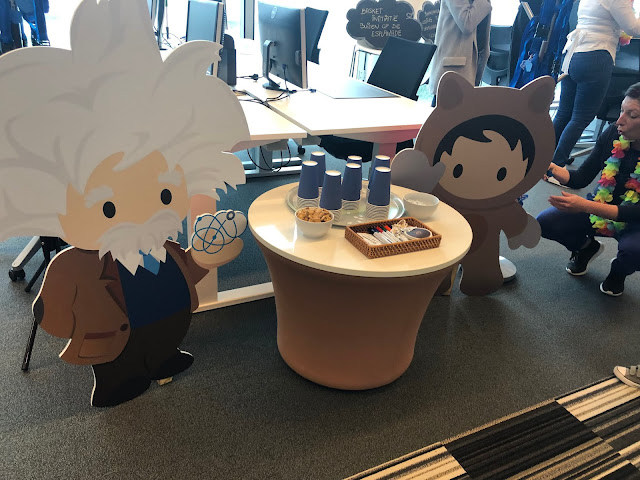 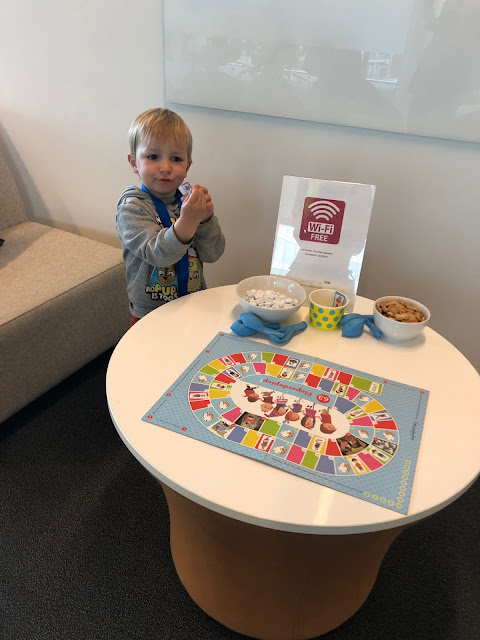 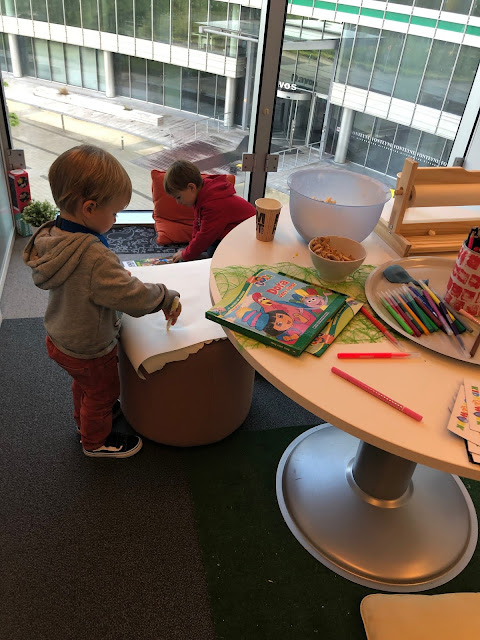 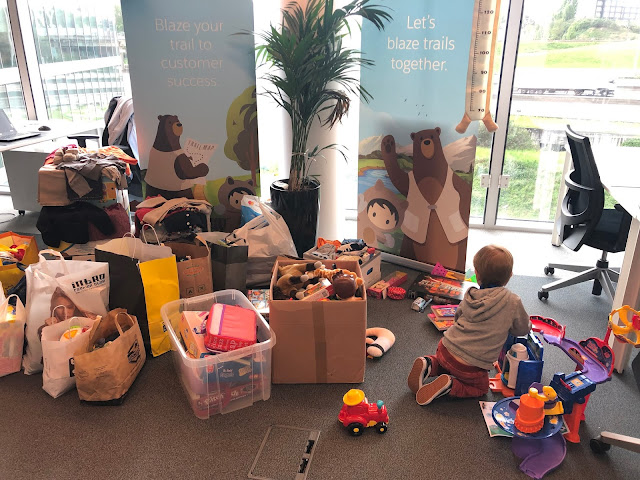 This year's edition focused even more than previous one on workshops so our children explored some music DJ where they got to test some buttons on the equipment. 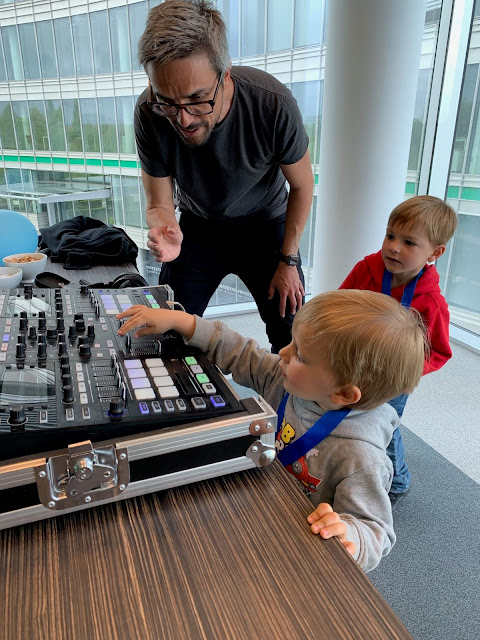 In a technology firm, of course there is a child friendly coding workshop as well. Here we got to play with the Fisher Price Think & Learn Code-a-Pillar Toy which was an instant hit with Beertje.  He confirmed a few times that evening that the caterpillar was the most fun at the party, even though he didn't really get yet that smartly chosing and combining the body pieces actually codes/instructes the caterpillar to move in a specific direction.
Kabouter also tested with Jan the little Ozobot Evo which follows your drawing lines and executes little commands depending on the colors you've selected in your drawing. The children were interested to do this, but this workshop was especially popular with their geeky parents.  Apparently that evening the sales of this little robot rose as several colleagues made their order for home. ...and yes, you guessed it right, we now also possess a little Ozobot. 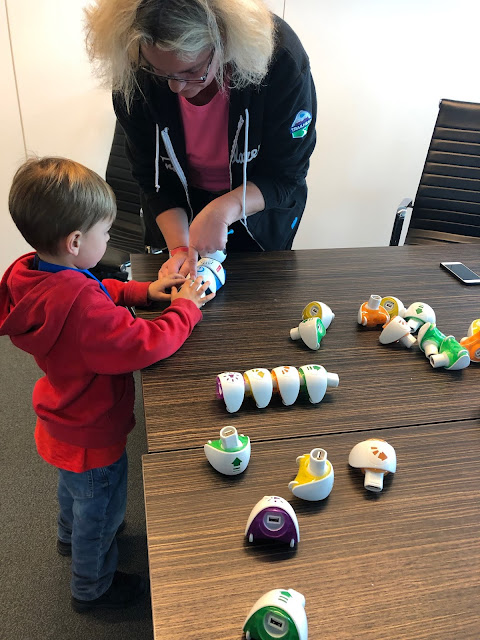 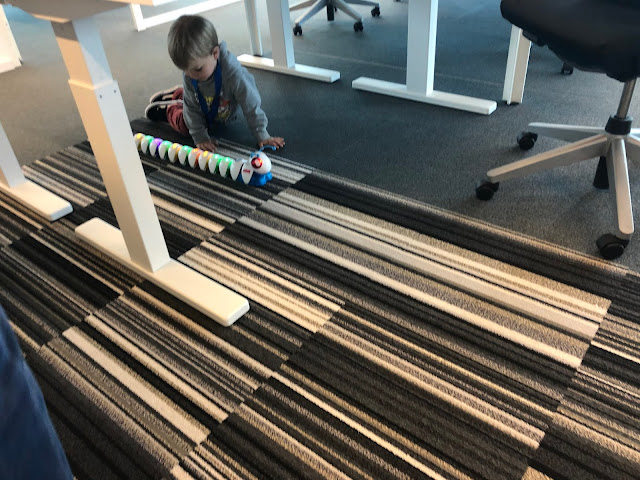 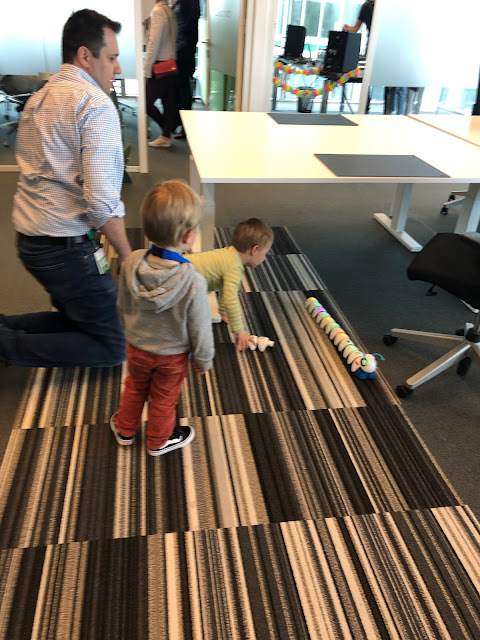 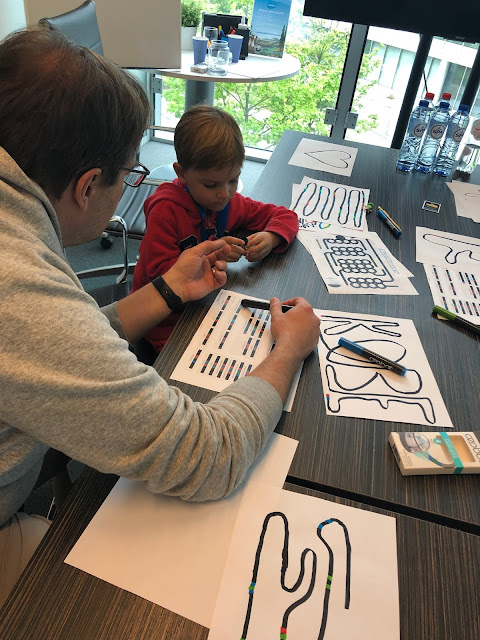 I enjoyed mostly the breakdance workshop however.  Where I doubted beforehand that this workshop should have toddlers as a target group, the 2 trainers did an awesome job in entertaining the little ones in a quite fun way and let them explore some of the breakdance moves at their level. It was absolutely fun to observe both the experts as this group of little children attempting some moves. At the end of the little workshop, Kabouter dared to demonstrate a move for the ones in the room but his little brother was too shy and he was quickly protected by his bigger brother. It was so fabulous to see them both together so protective and supporting.
At the end of the afternoon there was another opportunity to demonstrate for all the people present but that audience was too big for Kabouter to get back on the dance floor. 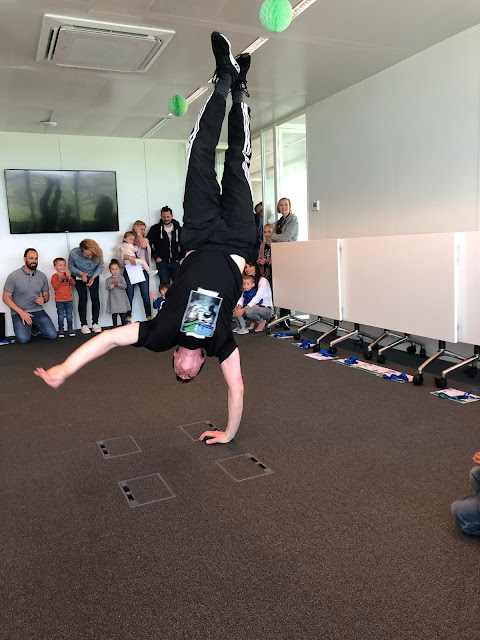 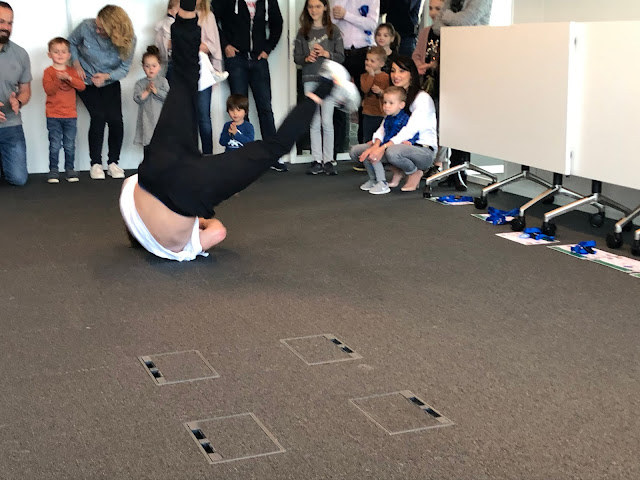 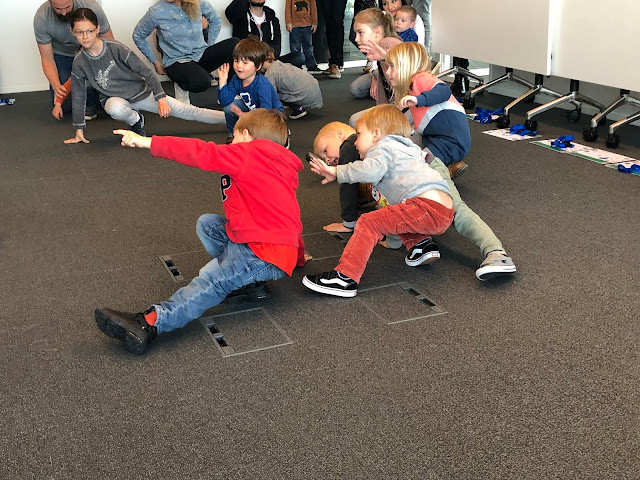 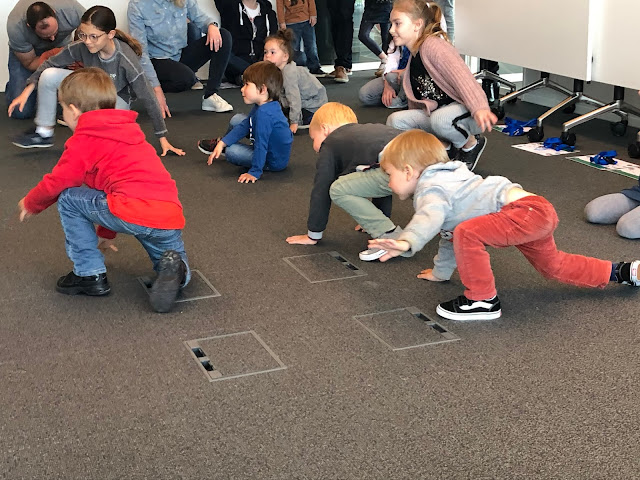 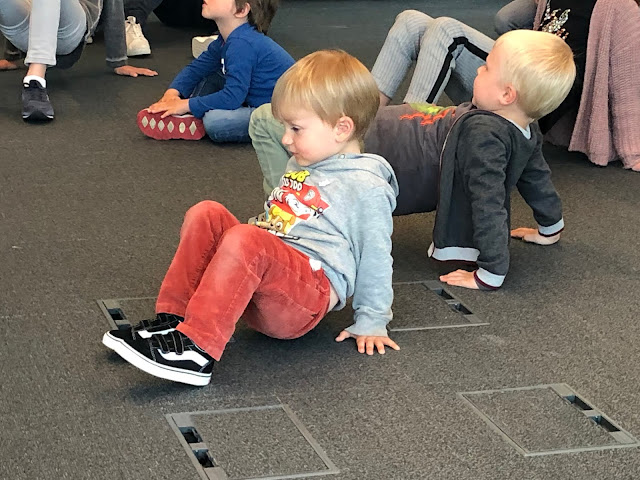 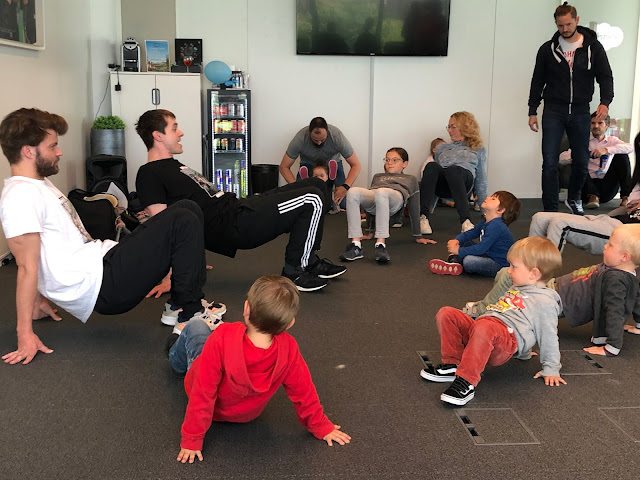 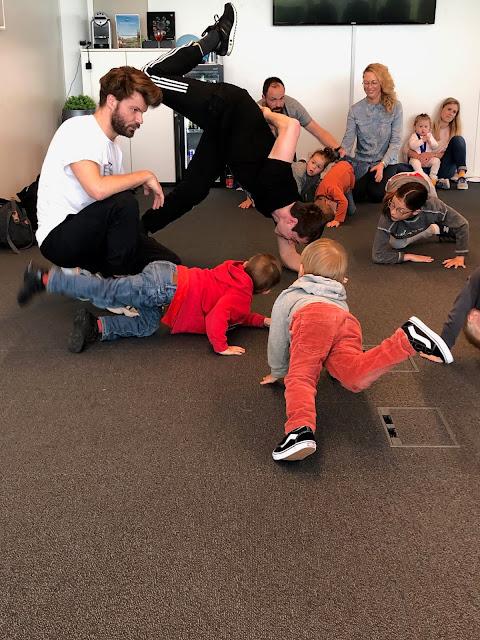 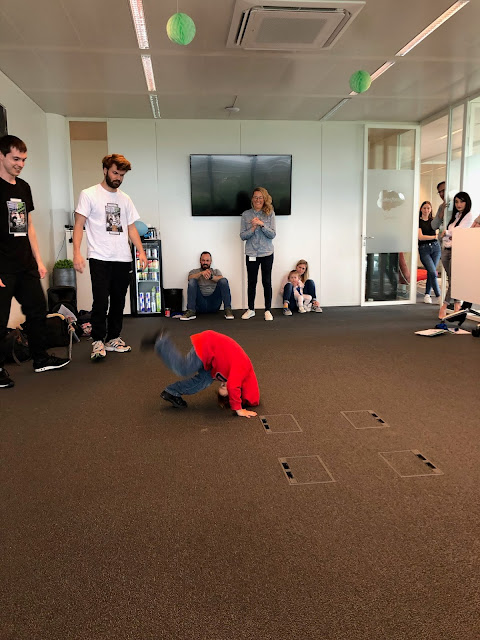 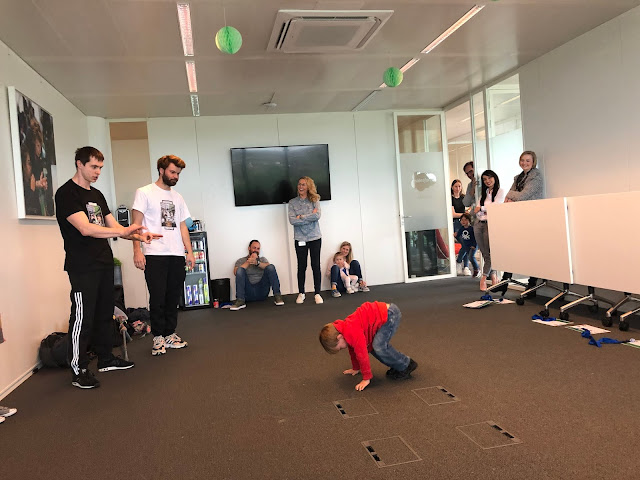 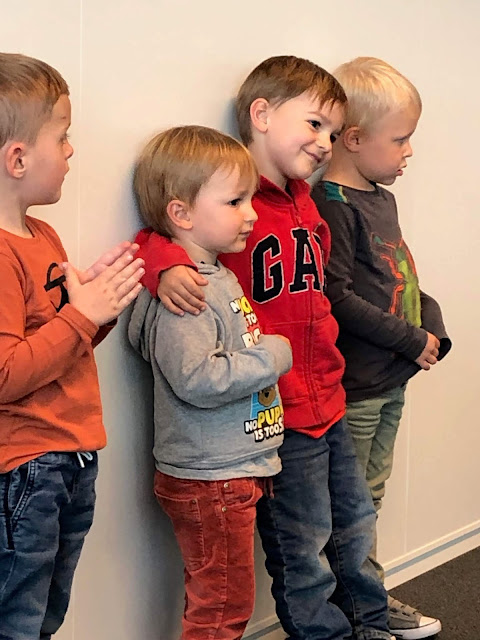