Last week was a surreal exhausting week.  Yes I can talk about the insane record breaking heat wave that tortured Belgium, made me feel unwell at moments and that kept us awake part of the night when we sought cooling for the night in vain.

No, the surreal week started waking up previous Saturday with Jan's announcement that Saskia from Mobile School had passed away.

What?
No
Huh?
Stop a moment and rewind...

How can someone many years younger than me all of a sudden pass away? How can someone not be with us anymore from one day to another?  How can somebody be on a biking vacation, get a migraine attack and visit a hospital...to never leave it anymore? How can an organisation like Mobile School lose its coordinator, the glue of the organisation as their sad announcement accurately described.


I spent the weekend in a big "this is not possible" bubble.  I cannot claim Saskia was a friend since we only had contact during Mobile School campaigns but didn't really share time outside that context. Yet for many years now, I've spend many meetings and skype calls and messages with her during 6 months per year in order to prepare the Duw Mee campaigns in December and the International Day of the Streetchild (April 12th).  Meetings where I'd consistently arrive late, if I showed up at all, after the children had gone to bed and where Saskia greeted me with welcoming warmth, briefed me quickly on what I missed, who was doing what and where I could help...but not after she offered me something to drink.  And if I only corrected a few comma's in a press article someone drafted, she gave me the feeling I made a huge needed contribution to Mobile School and the street children. If I couldn't attend too many meetings, we'd skype at other moments so that I got briefed and could make my communication planning. That's why it always felt so motivating and great to volunteer for them...she was the reason why Mobile School has such an extensive network of volunteers.

Early in the week the official funeral announcement got posted in our group and the national "Warmste Week" organisation also posted the announcement of her passing, "the driving force behind #duwmee, one of the eyecatchers of the Warmste week".  A stump in our stomac.  What seemed so unreal, became more tangible.  Social media filled with memories and pictures of her from across the world.

Volunteers and Mobile School members gathered in the office to cry, to hug and to prepare our contribution to her funeral.  I joined on Thursday evening. It was very difficult to arrive in the office and not to be greeted by her but I was warmly welcomed by other arms and shoulders.  It helps to gather together.  TV screens played picture loops of 10 years of Saskia at Mobile  School. I was glad there were so many, since she liked to keep herself in the background.
"It's going to be ok,  and it's not going to rain", we repeated to ourselves because that's what Sas would say to us. It was good to see people stepping up, taking notes, delegating tasks, ...doing what Sas used to do. 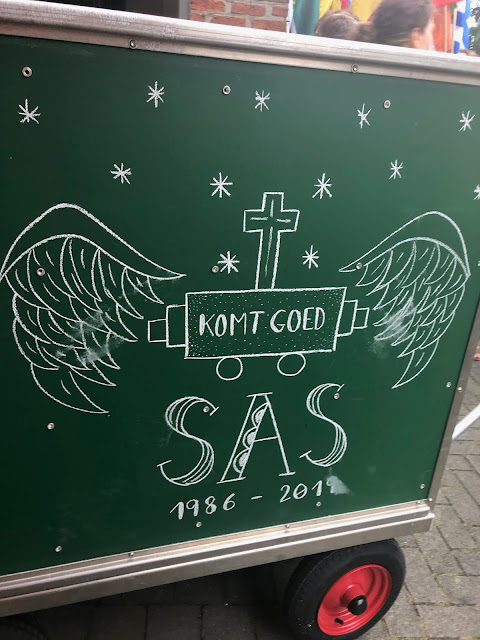 Yesterday we said goodbye to her with all her family, friends, neighbors, colleagues and mobile school volunteers.  People had interrupted their vacations in the Netherlands, Scotland, France, Italy, ... to return home for Saskia.  The church was filled with stories from Saskia as daughter, sister, aunt, friend, neighbour, colleague, ... I realised we were wrong to claim her as "our Sas" as if she was reduced to her dedicated work for Mobile School only.

Nevertheless, for "our Sas", we had organised a small funeral procession in #duwmee style with street musicians, flags of countries she had visited, the #duwmee paper laterns etc.  Together with her family and friends we all walked together with her beloved mobile school.  Because she cared for safety so  much, we got dressed in our fluo jackets and received police guidance and we disrupted traffic for a moment in good tradition of our Mobile School campaigns.  Pictures of her decorated the houses on our itinerary. 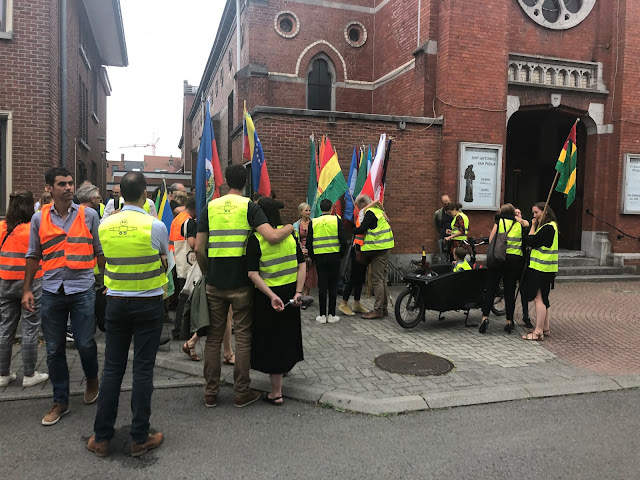 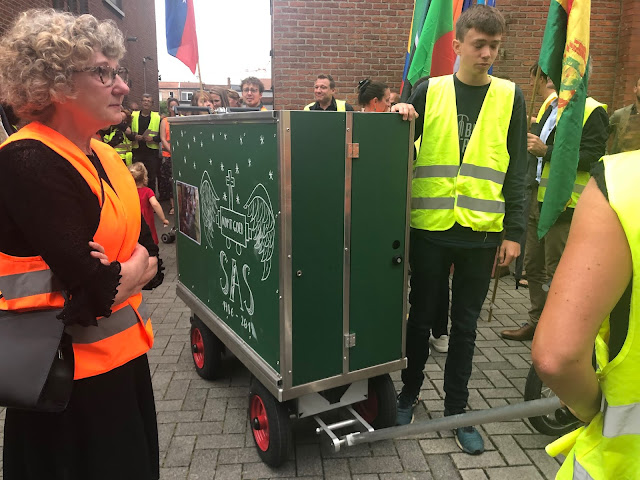 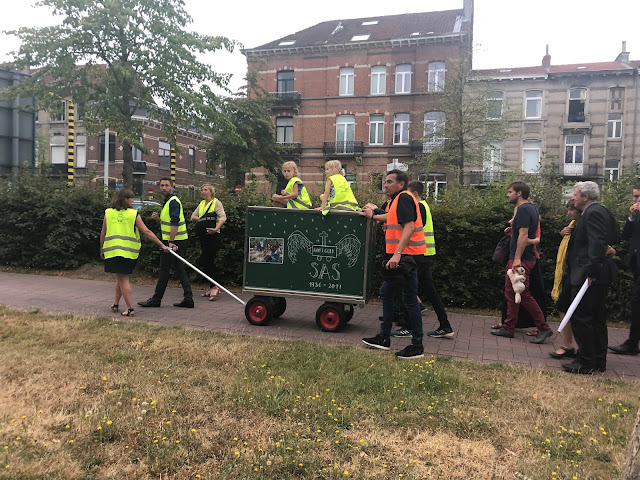 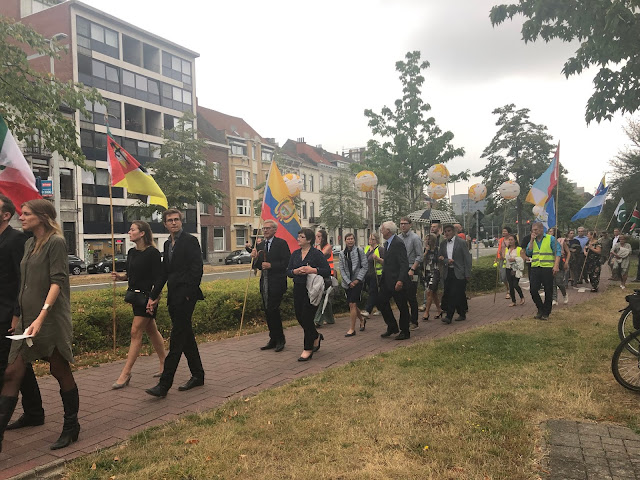 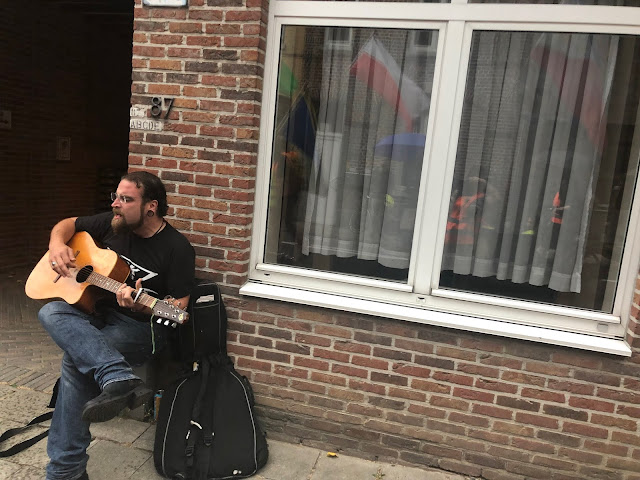 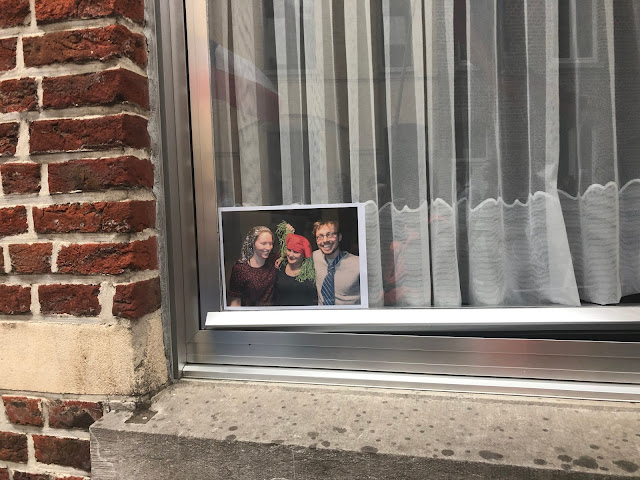 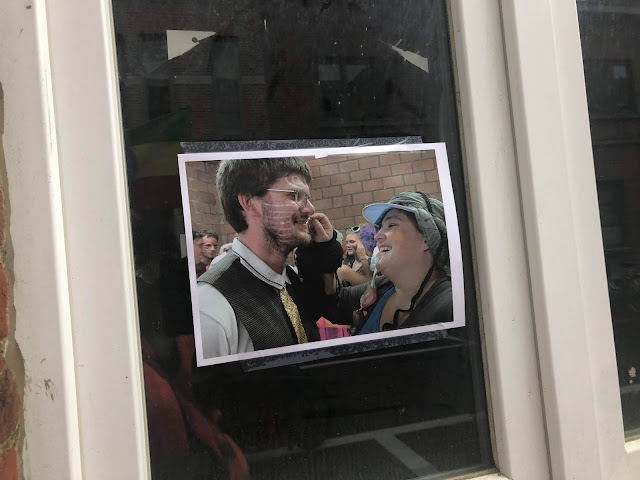 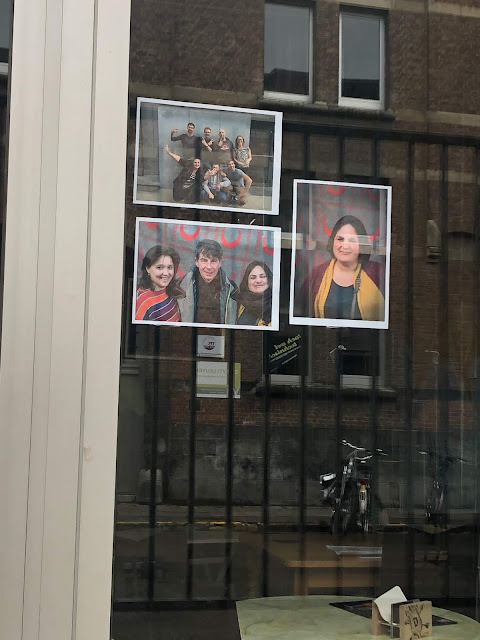 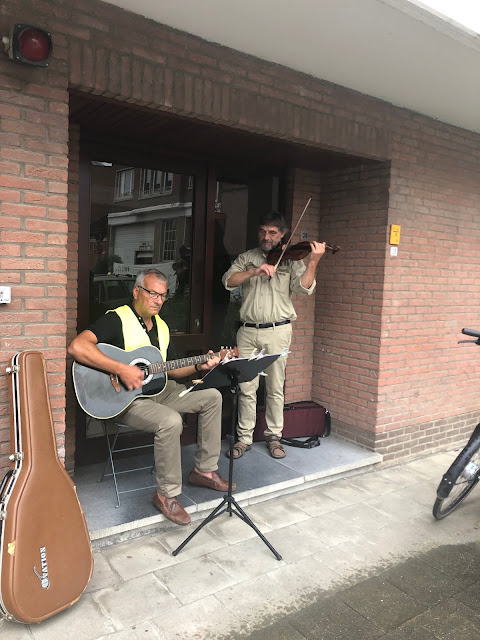 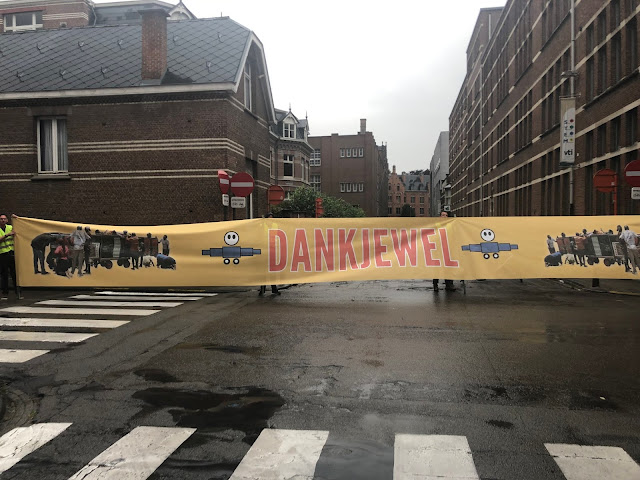 Soon after we left, it started to rain. I couldn't believe it...10 years of Mobile School campaigns without significant rain and the first action we needed to organise without her...and we got rain.  We had all been so convinced, despite all predictions that it wouldn't rain for the half an hour we'd be out!  "It's going to be ok,  and it's not going to rain" was her and our mantra.  But apparently after triggering the "warmste week" stunt in the middle of summer, she sent us rain to finally cool off.  And she would have trusted us correctly to have had back-up plans, so we were fine. Just when the clouds completely tore open to lash all drought saven rain on us, we could get into the Mobile School offices for a coffee table with the hundreds of people present.

Social media showed pictures of the mobile school with her name on it in a with water inundated street ... a sad picture that seemed to fit the reality of the day. 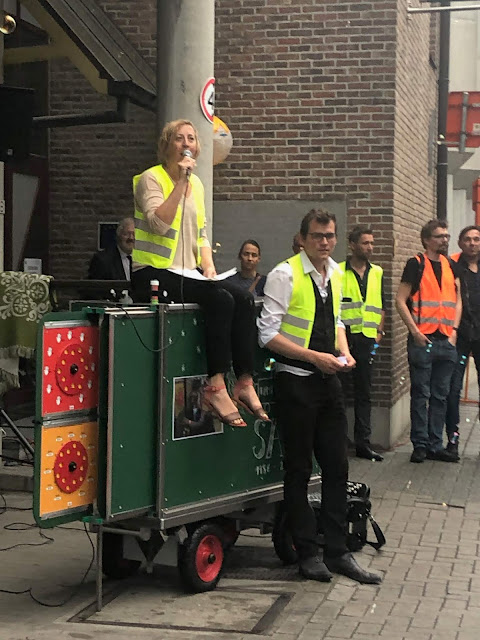 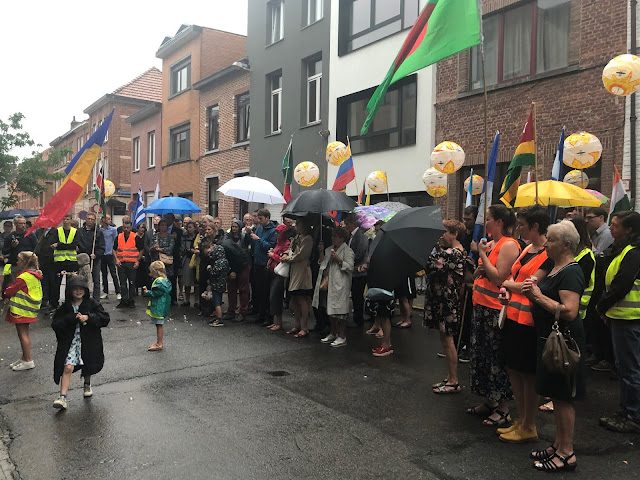 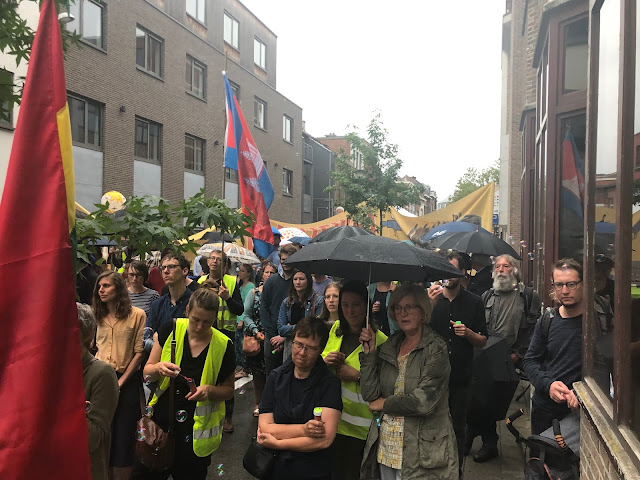 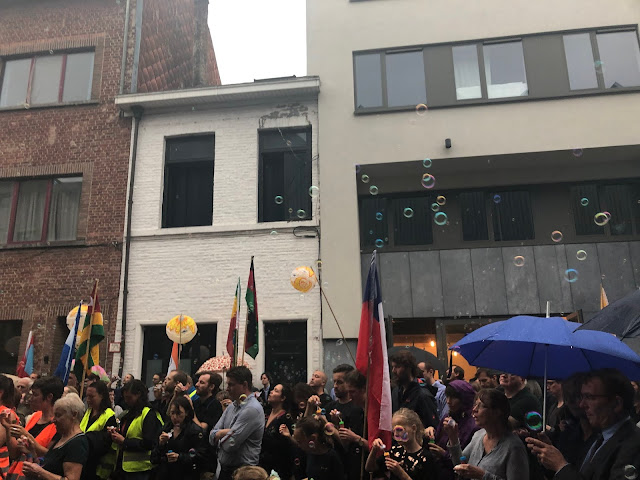 We catered for everyone, we talked, we hugged, we shared memories, we reflected on life and the footprint we leave in this world, we cried, we hugged again, we talked about vacation plans, we were together.  It was exhausting, it was still surreal but it was also beautiful.

Rest in peace Saskia.  We'll do our best to keep campaigning for Mobile School and make you proud. 't Komt goed.