Early August was our first meeting...The meeting invitation had been sent a lot earlier by Saskia but Saskia was no longer there.  There were a lot more people than in the usual Duwmee preparation meeting and we had to take a decision whether or not to organise a #duwmee in 2019 without her.

And yet there was no real discussion in the room. There was no real choice.  Of course we had to organise #duwmee 2019. We had to do it for Saskia, we had to make her proud.  And so we'd do it.
Mobile School, although a small organisation, recognised the enormous boost the yearly #duwmee campaign made to them so within the team tasks got reshuffled in the aftermath of Saskia's death and a team member would help us with the coordination again this autumn.  Not an easy task but very well done and so much appreciated by all of us, Ine!! Thanks for your organisational skills and time.

And so on Friday night a first small group of walkers started in Lille (Fr) for an overnight walk while a 100 walkers started off in Deinze yesterday morning for the first part of the walk.   The subscriptions were lower than the previous year. For a long time it seemed that the new itinerary (further away from most of our network) would only result in half of the walkers compared to previous year.  In the end it was 75% after all: a nice 600 men versus +800 in 2018.  A nice crowd after all :) ...we knew we wouldn't keep breaking our records year after year. Last year's +800 walkers were about the max we could do with our current security measures anyhow.

So at the afternoon stops, our crowd grew steadily to about 600 walkers for the last part where I joined with my family.  I had taken pictures and took some posts at the reststops at noon and mid-afternoon.  Each time there was nice music. In the afternoon there was an emotional moment when we wrote in chalk on the schoolground all the names of people that couldn't join us anymore but that we wanted to carry with us in our heart....of course a lot of times Sas was written down but also Enzo, the son of another active volunteer family and way too many other names.  I didn't stay dry. 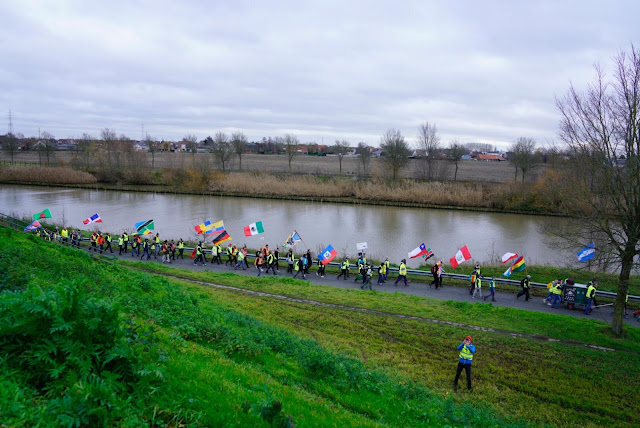 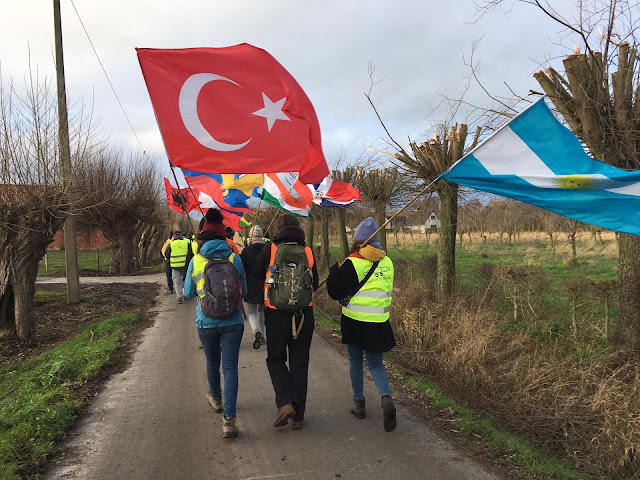 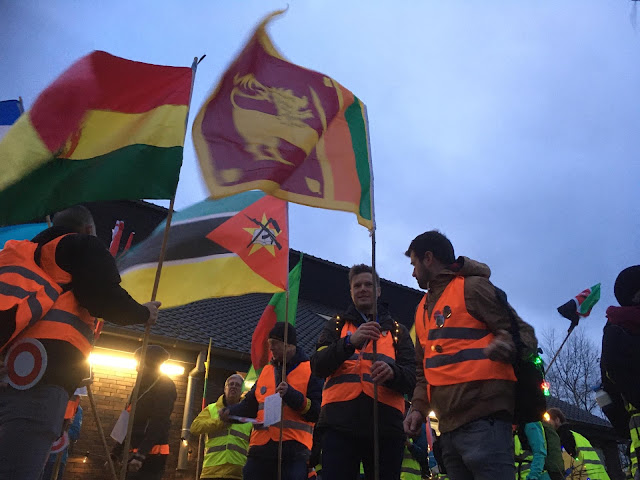 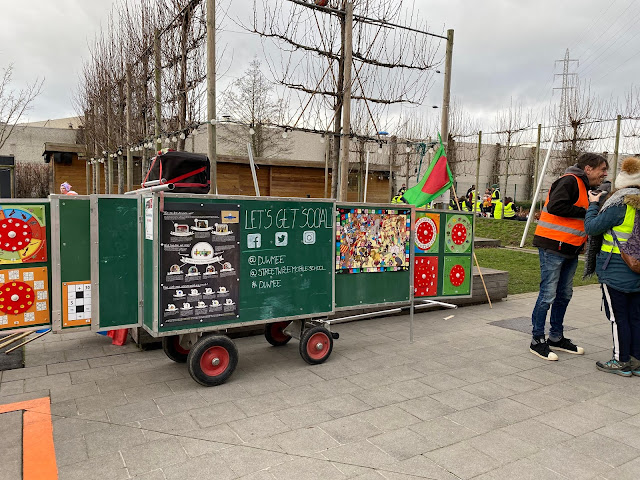 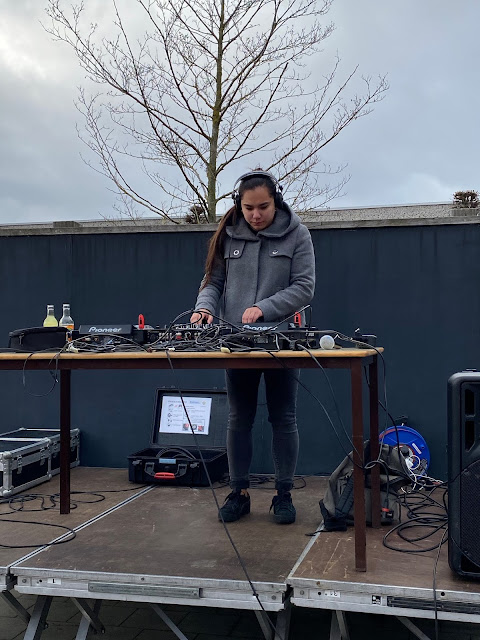 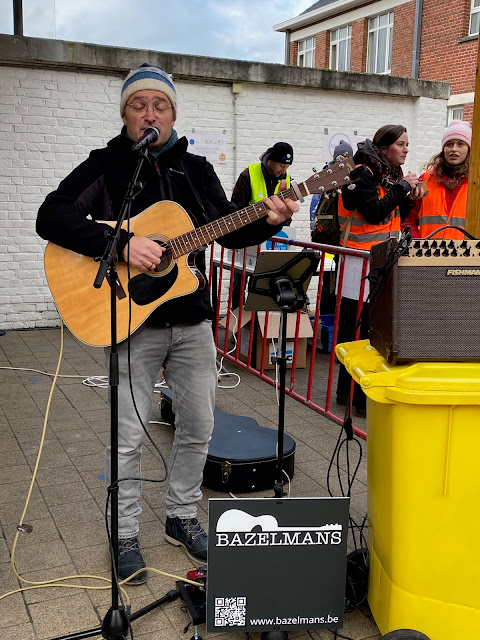 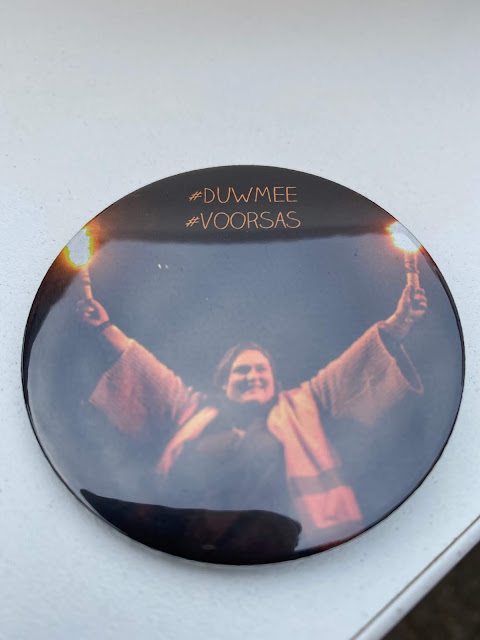 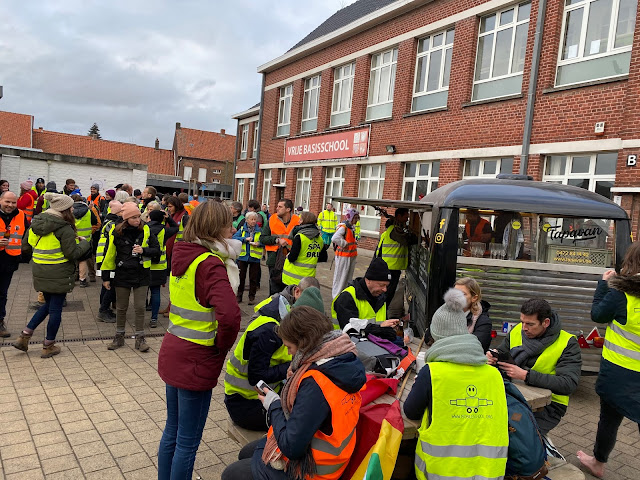 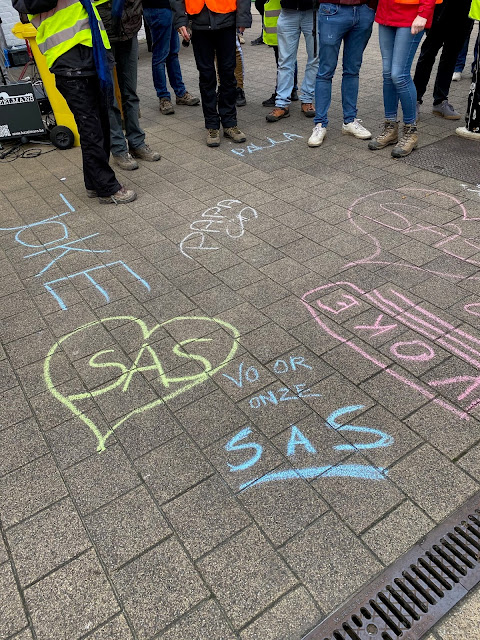 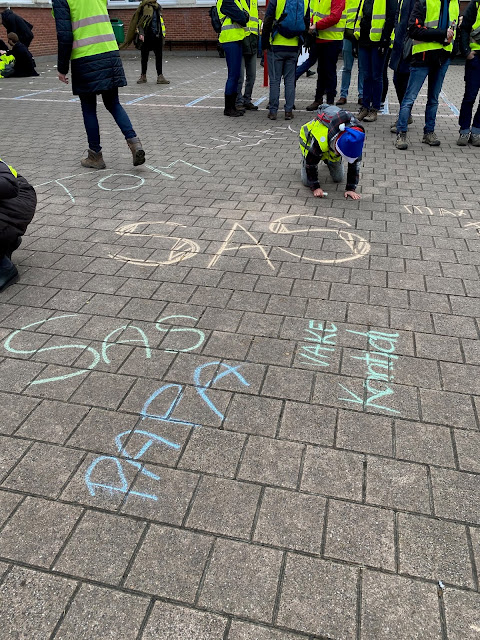 When the evening settles, the atmosphere is always very photogenetic as we all dress up with lights, fluo jackets and lampoons. The long march starts across streets and along the river, where all passer-by's wave and stop to take pictures of us.
At the arrival of Kortrijk, we held a mini festival under a bridge...very symbolic for street children.  There was a nice little concert given by Klaas Delrue from Yevgueni. 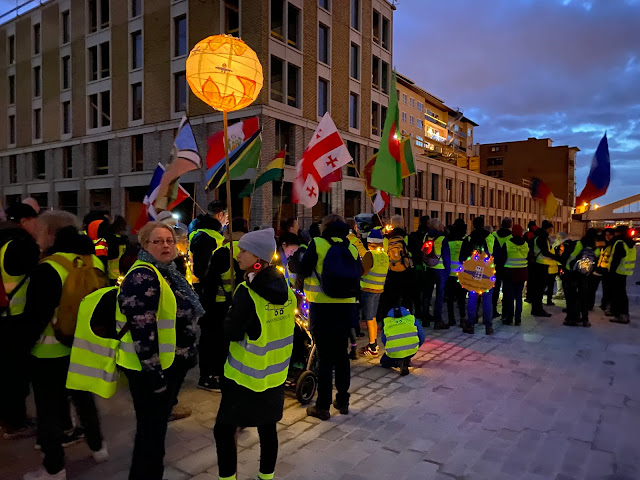 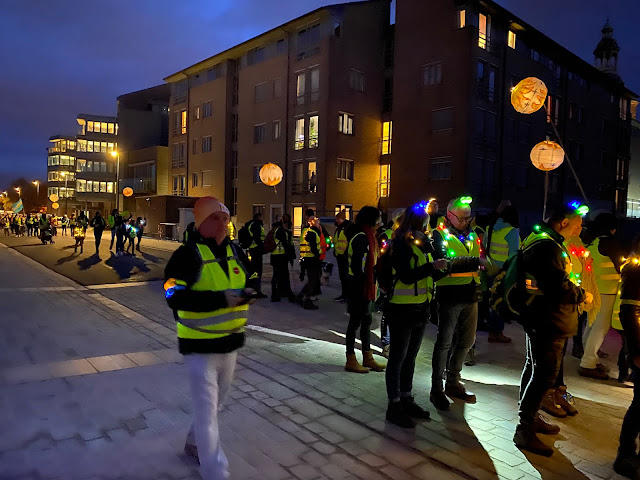 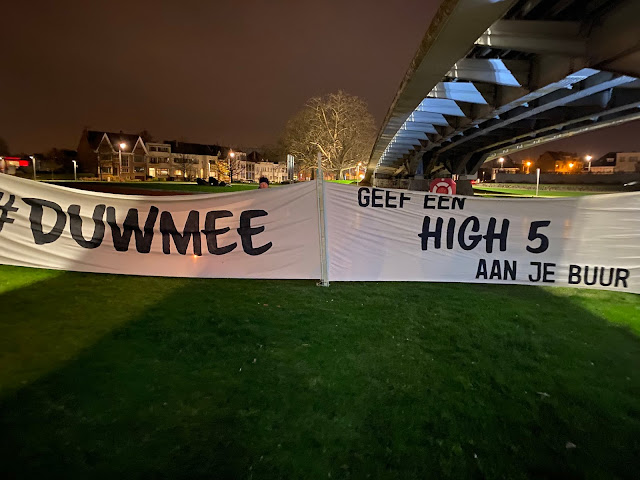 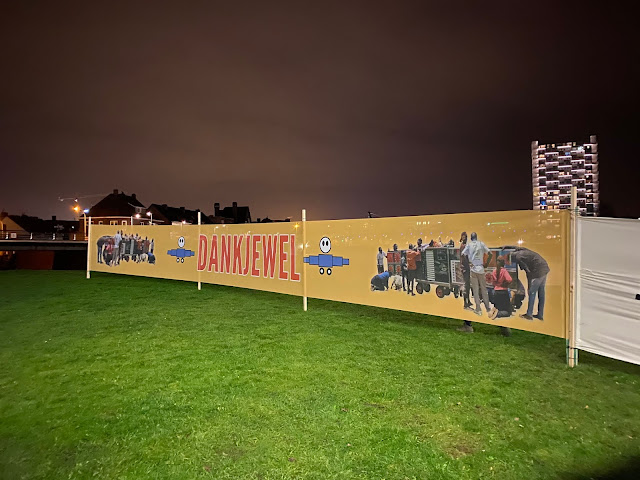 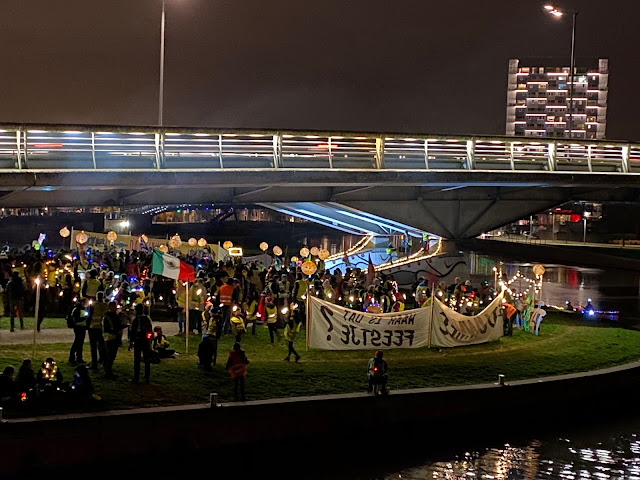 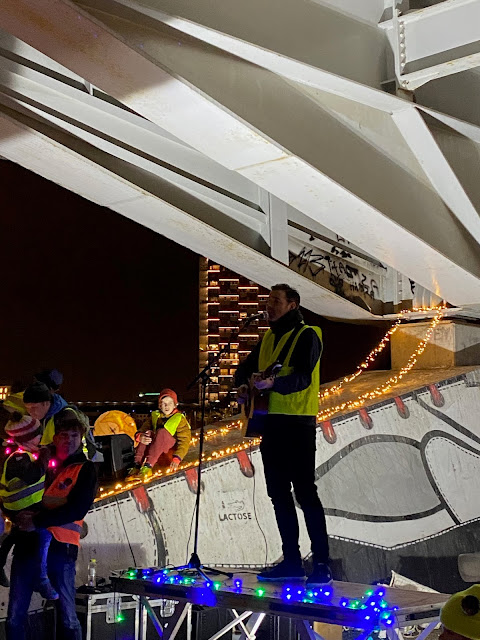 Then we walked for the last bit of our march across Kortrijk towards the square where Stu Bru and the Warmste Week was hosted.  We managed to get onto the square but as I said in previous post we had to leave early for several reasons.

We left in dry weather but missed the apotheosis of a great day in the pouring rain. Saskia seems to like to give us a rainy apotheosis. With a late but nice long talk on national tv and radio we could explain Mobile School and also about missing Saskia after which we heard we had gathered more than 47000€.  I had a big smile on my face on the radio while driving home. 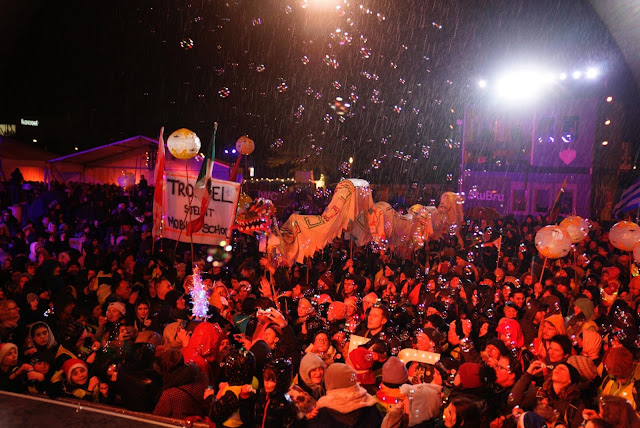 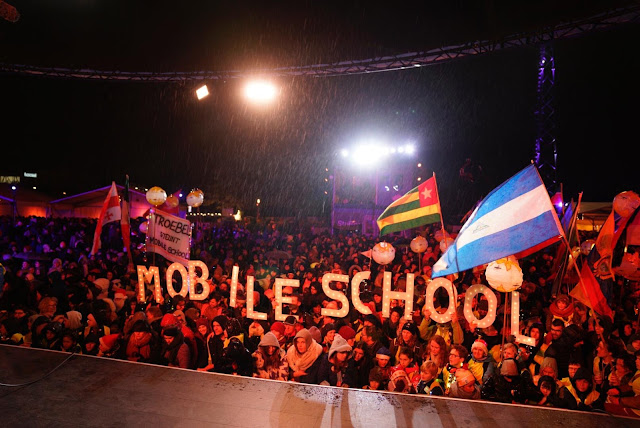 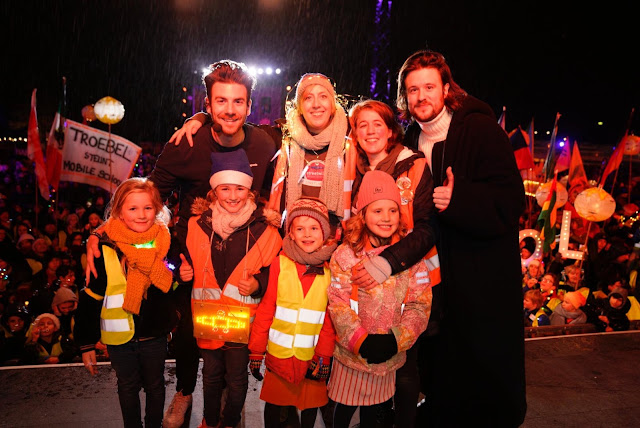