Because I stayed behind in the weekend in Leuven when Jan left with the children to the Ardennes in order to attend Saskia's funeral on Saturday,  all of a sudden I had a Friday evening on my own. Very weird.

It was the last evening of Beleuvenissen in Leuven. We used to faithfully visit all the concerts in the past up to 2012-2013.   Then we had our property in the Ardennes. We started to take the concerts for granted and we considered them not much original anymore so more and more we skipped going. We got children and all of a sudden I found the program only starting at 8 PM very late.   Ha that's just a few hours before I want to in bed. I got old :D.

But I didn't need a babysit, there's nothing on tv this summer so off I went downtown. Just like last summer I had hardly been in town for weeks. As inhabitant of Leuven I seem to do a lot of effort not to be there, especially in the summer.  So finally I saw the "Groot Verlof" sign on the big market for the first time. 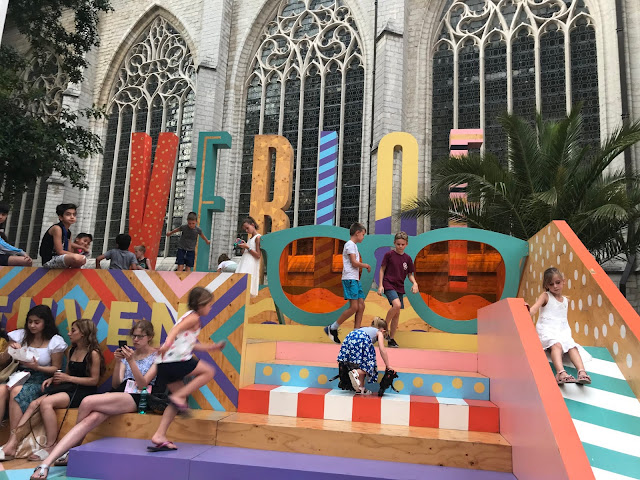 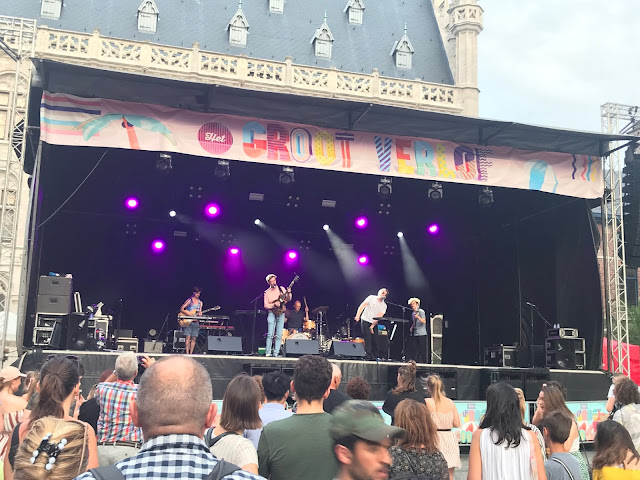 The first concert on the Big Market Square was by Mirranda, a band I don't know yet. Their sound was chill and very fitting for a summer where you have no energy to move much or do anything. It didn't boost me much so I continued to the Vismarkt.  The Rock & Roll High School brought by among other Stu Bru DJ Stijn Van De Voorde seemed more promissing. Indeed, there was more energy in the music and it was fun to hear classic hits on the square that was nicely decorated for a real nice summer vibe.

But clearly I was out still very early as there wasn't much people around yet and also here everything was still relatively calm.  Nice that there were free water points foreseen after this week of unprecedented heat. At least tonight was sufficiently cooled off to dare to leave the house. No way I'd done this the 2 days before with >40C but this 32C now seemed so mild and comfortable. 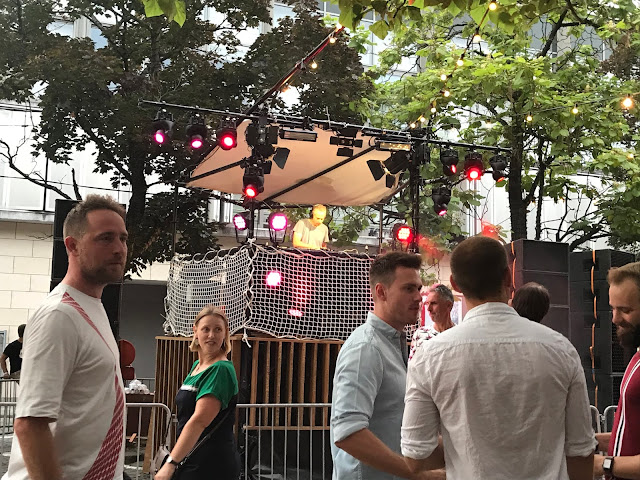 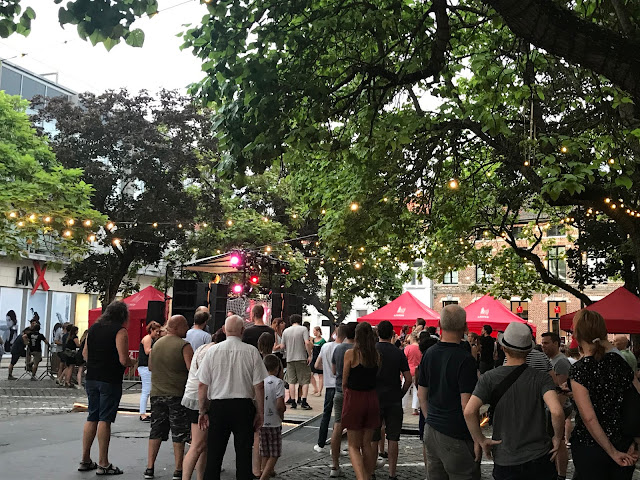 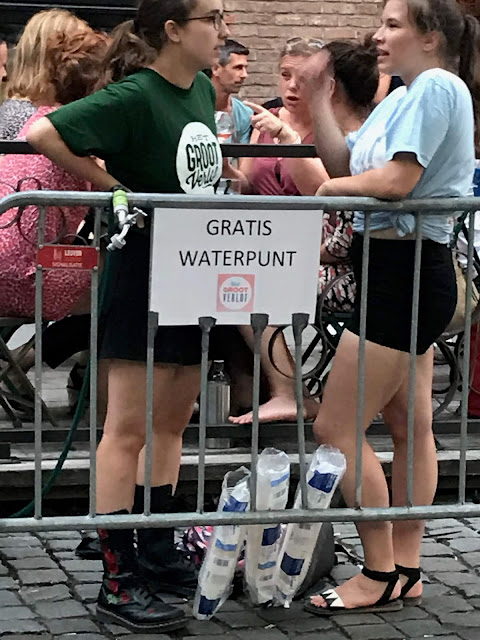 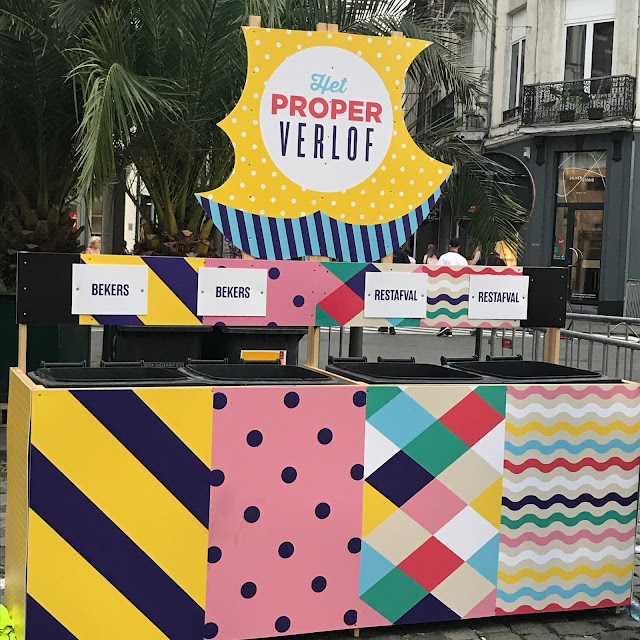 After hanging out a bit on the Vismarkt I hurried to the Oude Markt to listen to the last part of the concert of Ertebrekers.  This group starring among others the well-known multi talented Flip Kowlier was quite cool to find. The market filled up well and I enjoyed the concert.  I don't know how many bands Flip has founded already and how many music styles he tested, but he sure was talented in smooth fun conversations with the public. 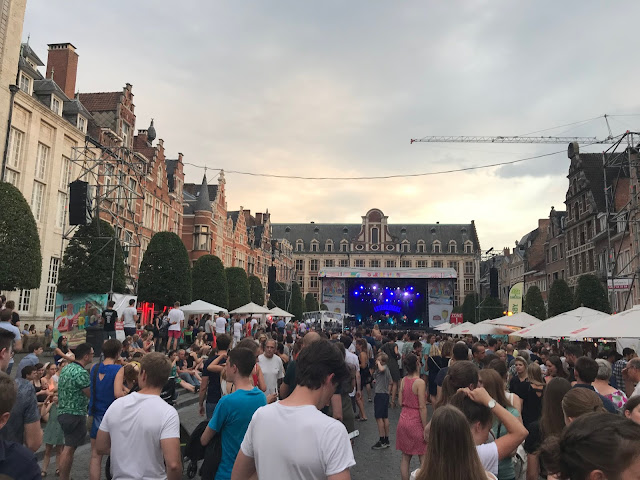 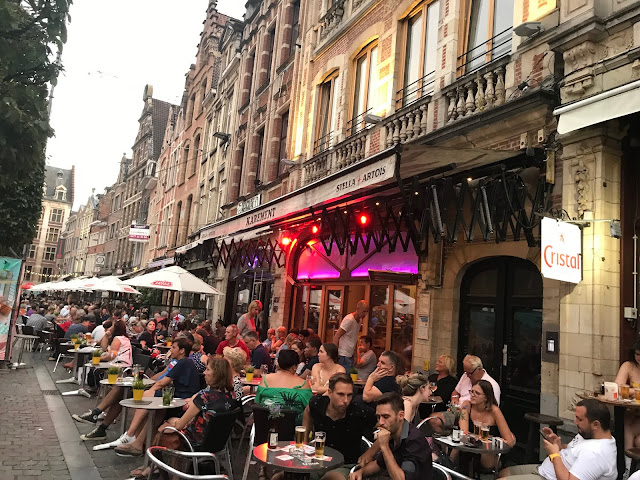 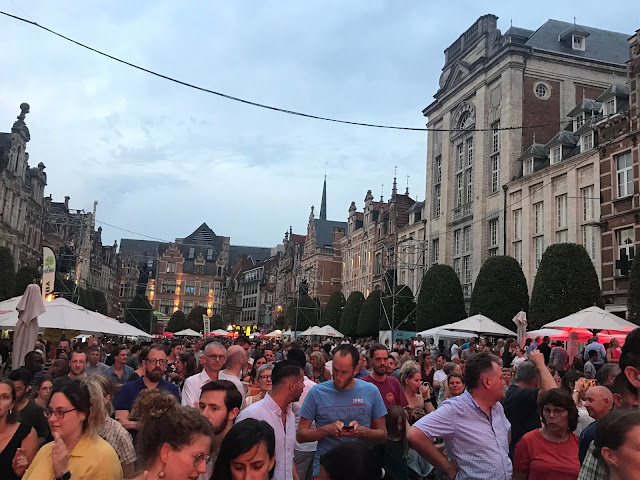 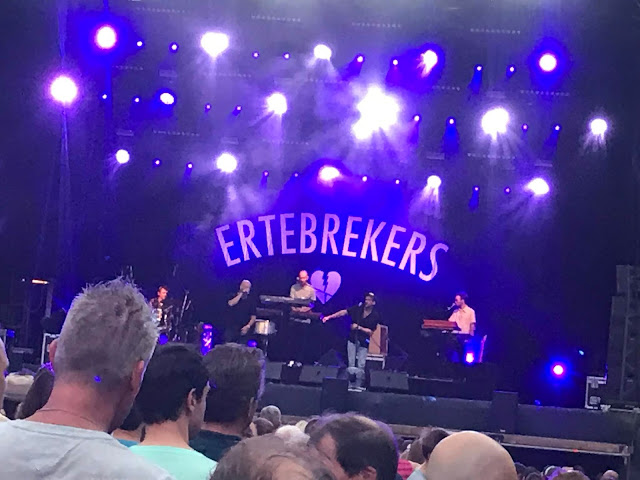 When the Ertebrekers were done, I left the Oude Markt and quickly headed to the Hogeschoolplein to listen to a few folk songs by Filip Masure.  The change of style between the 2 squares was a bit confusing but the folk vibe was very cool and I all of a sudden wondered why I'm not listening to folk anymore as I used to do so much 20 years ago.  Filip Masure sure gave me appetite to dig into it again.

But that'll be later because this old lady called it a night and quickly headed home to crawl into my bed. Unfortunately the nice temperature cooled off outside but inside the house the heat didn't seem to want to leave. Ugh.  Anyway, it was fun to be out again, listen to music, hang out in the city and being on my own had its advantage that I could exactly move or stay where I wanted for as long as I felt like it. 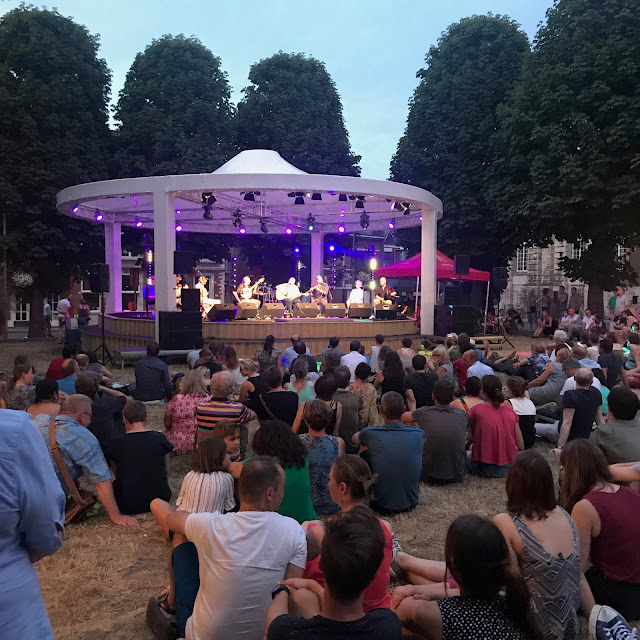